The students are among 800 American undergraduate students from 356 college and universities across the U.S. to receive the scholarship, which is sponsored by the U.S. Department of State’s Bureau of Educational and Cultural Affairs. The scholarship will allow the students to study abroad during the spring 2015 semester.

Gilman scholars receive up to $5,000 to apply toward their study abroad or internship program costs. The program aims to diversify the ranks of students who study and intern abroad, and the countries and regions where they go. Students receiving a Federal Pell Grant from two- and four-year institutions who will be studying abroad or participating in a career-oriented international internship for academic credit are eligible to apply. Scholarship recipients have the opportunity to gain a better understanding of other cultures, countries, languages and economies – making them better prepared to assume leadership roles within government and the private sector.

Congressman Gilman, who retired in 2002 after serving in the House of Representatives for 30 years and chairing the Hours Foreign Relations Committee, said, “Study abroad is a special experience for every student who participates. Living and learning in a vastly different environment of another nation not only exposes our students to alternate views, but also adds an enriching social and cultural experience. It also provides our students with the opportunity to return home with a deeper understanding of their place in the world, encouraging them to be contributors, rather than spectators in the international community.”

The program is administered by the Institute of International Education.

According to Allan Goodman, president and CEO of the institute, “International education is one of the best tools for developing mutual understanding and building connections between people from different countries. It is critical to the success of American diplomacy and business, and the lasting ties that Americans make during their international studies are important to our country in times of conflict as well as times of peace.”

The Gilman Scholarship Program is one of many study abroad opportunities for which ASU students can apply. ASU students can study abroad through over 250 programs in more than 55 countries facilitated by the Study Abroad Office. More information can be found at http://studyabroad.asu.edu.

The Lorraine W. Frank Office of National Scholarship Advisement, housed at Barrett, the Honors College at ASU, assists students from all ASU campuses in preparing to compete for national and international awards of merit, including the Gilman, Rhodes, Marshall, Mitchell, Fulbright, Truman, Goldwater, Carnegie Jr. Fellows, NSF, Udall, National Security Education Program, Killam and Woodrow Wilson scholarships. Since 1991, office-directed students have won more than 427 major national awards worth millions of dollars in external funding. In several competitions, ASU ranks among the top schools in the United States. For more information about the office visit http://barretthonors.asu.edu/academics/scholarships-and-fellowships/.

Few teachers who make the sacrifice it takes to work in education expect recognition, let alone that Hollywood will make a major movie about their careers. But together, two Arizona State University-trained educators unwittingly provided inspiration for the lead character played by George Lopez in the new film “Spare Parts.”

Focusing on a life-changing competition shared by the teachers and their students, the world movie premiere is scheduled for Jan. 16, at Harkins Cine Capri in Tempe Marketplace. Previously, the documentary film, “Underwater Dreams,” released in spring 2014, chronicled their experience and received national attention. 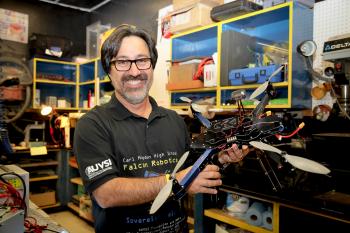 In “Spare Parts,” Lopez’s fictional character is a combination of Faridodin "Fredi" Lajvardi and Allan Cameron, both graduates of ASU’s Mary Lou Fulton Teachers College and mentors to the Carl Hayden Community High School robotics team in Phoenix. Back in 2004, they helped catapult an unlikely team of four students to national prominence by winning a college-level underwater robotics contest over well-known elite competitors, such as Massachusetts Institute of Technology (MIT).

The Carl Hayden students, all undocumented immigrants, lacked the money and education level of the college teams. But they outsmarted them using $800 and a surprising mix of ingenuity and resourcefulness that landed their robot, “Stinky,” in first place. According to Lajvardi, the high school’s student population is 90 percent Hispanic, with 92 percent living below the poverty line. Many are eligible for benefits afforded DREAMers under President Obama’s 2012 changes to federal immigration policy.

Lajvardi, who asked Cameron to help him create the Falcon Robotics Team as an extracurricular program more than a decade ago, is a passionate advocate of STEM (science, technology, engineering and math) learning. He said robotics team members spend nearly all of their after-school hours working on STEM projects and that teaches them how to survive in academic competitions and in life.

More than 30 team members have entered university-level engineering programs around the country over the past six years, including at ASU. Because they have learned to take initiative, all but one of his former students enrolled in ASU’s engineering program have been able to stay at the university despite many obstacles, Lajvardi said.

“My robotics students not only learn more STEM, they learn how to navigate all the stuff that allows them to do more STEM,” he explained. “They learn how to work in groups, talk to adults and ask the right questions. So when things get tough or complicated, they don’t panic, they find a way to survive.”

A father figure for many of his students, Lajvardi said he identifies with their immigrant status, having left Iran as a one-year-old with his parents seeking greater opportunities in America. He found a pathway to U.S. citizenship after registering with his local draft board. He credits being a first-generation American with his own work ethic and that of his Hispanic students who are not put off by the rigor required of robotics team members. Their persistence is what fuels their success, he explained.

“A lot of my students, especially if they’re undocumented, are watching their parents work to death,” he said. “These kids understand work ethic. They understand a parent going from one job to another job and not being at home.”

Two teachers better than one

A self-described hippie in college, Cameron said he pursued an undergraduate elementary education degree at ASU on the advice of his philosophy professor: “It seemed like an occupation where you really do make a difference in the world. You’re not just moving money around or making something for people to consume.”

Cameron cut his teeth in education by taming an unruly group of elementary school students, who had run off their former teacher, using positive reinforcement techniques learned in the U.S. Navy. After earning an ASU doctorate in elementary education with a computer science emphasis, he joined Carl Hayden as a teacher in its computer science magnet program. (He retired from the high school in 2007 after 22 years.)

Like Lajvardi, Cameron wanted to do even more to motivate his students, so he started an amateur radio club where they were able to talk with space shuttle astronauts and scientists in Antarctica. He also began searching for computer science outlets just as Lajvardi was launching the high school’s robotics program. They teamed up for what soon became a 50-hour-a-week labor of love mentoring a dedicated and determined group of young Hispanic students.

“It was so good working with the kids,” Cameron said. “It was after school and they wanted to be there, so everything was cool about teaching.”

Teachers celebrate ‘sports for the brain’

It was only a few weeks after the launch that Cameron and Lajvardi stepped into Staples Center arena in Los Angeles for a robotics face-off among dozens of high school teams. Later, their small band of high school students would challenge college-level competitors, beating MIT at the MATE (Marine Advanced Technology Education Center) National ROV Championships in Santa Barbara, California, in summer 2004 – and the rest is history.

But in that moment when the teachers first experienced the “sports-for-the-brain” atmosphere of a major robotics competition, they were sold. “Fredi and I looked at each other and said, ‘Okay, we’re doing this again,’” Cameron recalled. “This is what academics should be.”