A team of scientists from Arizona State University’s Biodesign Institute and IBM’s T.J. Watson Research Center have developed a prototype DNA reader that could make whole genome profiling an everyday practice in medicine.

"Our goal is to put cheap, simple and powerful DNA and protein diagnostic devices into every single doctor's office," said Stuart Lindsay, an ASU physics professor and director of Biodesign’s Center for Single Molecule Biophysics.

Such technology could help usher in the age of personalized medicine, where information from an individual’s complete DNA and protein profiles could be used to design treatments specific to their individual makeup.

Using tools where biology and physics expertise meet the manufacturing know-how of the semiconductor industry, the team, led by ASU’s Stuart Lindsay and IBM’s Yann Astier, has been developing a device which could make reading an individual’s whole DNA profile, or genome, as easy as passing supermarket goods through a checkout scanner. The first step in doing this is to make a “reading head” that identified single DNA bases as they pass it.

If successful, Lindsay hopes to turn the science of the infinitesimally small (called nanotechnology) into successful products. The ASU group is collaborating with Roche on DNA sequencing while an ASU spinout (Recognition Analytix) hopes to develop a way to sequence single protein molecules.

Such game-changing technology is needed to make genome sequencing a reality. The current hurdle is to do so for less than $1,000, an amount for which insurance companies are more likely to provide reimbursement.

In their latest research breakthrough, the team fashioned a tiny DNA-reading device, thousands of times smaller than the width of a single human hair. The device is sensitive enough to distinguish the individual chemical bases of DNA (known by their abbreviated letters of A, C, T or G) when they are pumped past the reading head.

Making the solid-state device is just like making a sandwich, except with ultra high-tech semiconductor tools used to slice and stack the atomic-sized layers of meats and cheeses like the butcher shop’s block. The secret is to slice and stack the layers just so, to turn the chemical information of the DNA into a change in the electrical signal.

First, they made a “sandwich” composed of two metal electrodes separated by a two-nanometer-thick insulating layer (a single nanometer is 10,000 times smaller than a human hair), made by using a semiconductor technology called atomic layer deposition.

Then a hole is cut through the sandwich: DNA bases inside the hole are read as they pass the gap between the metal layers.

“The technology we’ve developed might just be the first big step in building a single-molecule sequencing device based on ordinary computer chip technology,” said Lindsay.

“Previous attempts to make tunnel junctions for reading DNA had one electrode facing another across a small gap between the electrodes, and the gaps had to be adjusted by hand," he added. "This made it impossible to use computer chip manufacturing methods to make devices.

“Our approach of defining the gap using a thin layer of dielectric (insulating) material between the electrodes and exposing this gap by drilling a hole through the layers is much easier. What is more, the recognition tunneling technology we have developed allows us to make a relatively large gap (of two nanometers) compared to the much smaller gaps required previously for tunnel current read-out (which were less than a single nanometer wide). The ability to use larger gaps for tunneling makes the manufacture of the device much easier and gives DNA molecules room to pass the electrodes.”

Specifically, when a current is passed through the nanopore, as the DNA passes through, it causes a spike in the current unique to each chemical base (A, C, T or G) within the DNA molecule. A few more modifications are made to polish and finish the device manufacturing.

The team encountered considerable device-to-device variation, so calibration will be needed to make the technology more robust. And the final big step – of reducing the diameter of the hole through the device to that of a single DNA molecule – has yet to be taken.

But overall, the research team has developed a scalable manufacturing process to make a device that can work reliably for hours at a time, identifying each of the DNA chemical bases while flowing through the two-nanometer gap.

The research team is also working on modifying the technique to read other single molecules, which could be used in an important technology for drug development.

The latest developments could also bring in big business for ASU. Lindsay, dubbed a “serial entrepreneur” by the media, has a new spinout venture, called Recognition Analytix, that hopes to follow the success of Molecular Imaging Corp, a similar instrument company he co-founded in 1993 and sold to Agilent Technologies in 2005.

The research was funded by the National Institutes of Health’s National Human Genome Research Institute, Roche, and published in the journal ACS Nano.

In becoming a partner in the Murchison Widefield Array radio telescope, scientists from Arizona State University's School of Earth and Space Exploration will be using it to explore the beginning of the universe.

Arizona State University has joined with 14 other institutions in Australia, India, New Zealand and the United States in a radio telescope project that focuses on the early universe and the birth and formation of the first galaxies.

The radio telescope is the Murchison Widefield Array (MWA), located in the Shire of Murchison, Western Australia. The Shire, isolated and sparsely populated, has no villages or towns, and consists of only about 30 cattle and sheep stations (ranches), with a combined population of around 100. These are spread over about 20,000 square miles (50,000 square kilometers). 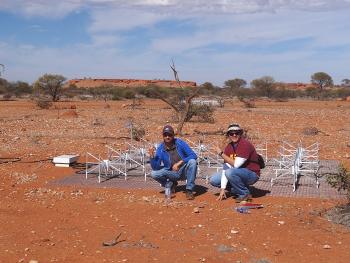 The telescope is constructed of 2,048 dipole antennas, grouped into four-by-four arrays called tiles. Each dipole antenna spans about 30 inches (74 centimeters). Most of the tiles (112) scatter across a core section 1 mile (1.5 kilometers) in diameter, with the remaining 16 tiles placed outside the core, yielding baseline distances of about 2 miles (3 kilometers).

The antennas and receivers operate at low radio frequencies and are optimized for radio waves in the 80-300 Megahertz range – the same frequencies used for FM radio and broadcast TV. Hence, Murchison's geographic isolation provides great advantages.

"A dense-core-plus-outliers arrangement gives sensitive, wide-field views from the central tiles," says Judd Bowman, associate professor of astronomy in the School of Earth and Space Exploration and project scientist for the telescope array. "And the outliers provide high-resolution imaging for solar outbursts and extragalactic sources, other areas of focus in the telescope's scientific program."

The telescope program will provide many opportunities for scientists, researchers and students in the school, Bowman says. "As a partner institution in the telescope, any faculty member at ASU can join the project and receive access to observing data."

Three ASU undergraduates traveled with Bowman to Australia to help with the construction and commissioning of the telescope and related experiments at the site. The telescope is already being used by graduate students and two postdoctoral scholars at ASU for their research. For example, ASU researchers are currently using the telescope to search for traces of relic radio waves from primordial gas surrounding the first stars and galaxies at a time, more than 13 billion years ago, when the universe was less than a billion years old.

Bowman says, “This telescope complements very well the observational cosmology efforts already underway at ASU to observe the oldest galaxies in the universe. With the MWA, while we won’t see the galaxies themselves, we hope to detect the cosmic fingerprints those galaxies left in the intergalactic gas around them.”

Danny Jacobs, NSF Postdoctoral Fellow in the School of Earth and Space Exploration, is helping to coordinate the analysis of more than a thousand terabytes of data already acquired by the telescope. “The MWA is fixed to the ground and sees the entire sky," he explains. To unpack the signals and extract the data requires powerful computer processing. "To an unprecedented degree, the MWA is a software telescope. We’re really pushing the limits of what our computers can do.”

The Murchison Widefield Array has four elements, or research avenues, that make up its scientific program. These are: (1) exploration of the Cosmic Dawn and epoch of reionization, the period when the first stars and galaxies formed in the early universe; (2) radio emission from the Milky Way Galaxy and extragalactic sources, which is both a complicating foreground "fog" for observations and an interesting scientific target of its own; (3) searching for transient and variable radio events that are rare and faint, and which occur on timescales from seconds to months; and (4) space weather, the study of solar outbursts as they travel from the sun's surface to Earth.

Along with ASU's new role in the project, Bowman notes, the School of Earth and Space Exploration is hosting an international scientific conference in December 2014. It will be based around the Murchison Widefield Array and the initial science results from both it and other low-frequency radio telescopes.