This year, Arizona State University will welcome more than 6,000 visitors campus-wide for the 2014 Family Weekend, Oct. 17-19. The celebration of spirit, pride and tradition has never been higher, with record numbers of registrants for the signature Family Weekend events.

Family Weekend happens at the height of a bustling academic term, and is the perfect time for ASU families to reconnect with their Sun Devil, bask in the mild fall weather and – most of all – have fun. 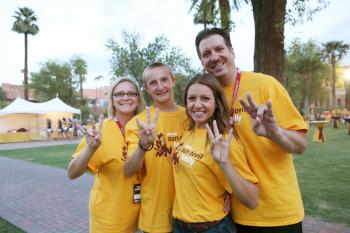 From a Spirit Hike to the Signature Tailgate barbecue, the weekend is filled with activities designed to give families a glimpse into their Sun Devil’s experience. Family members will celebrate with their student during three days of entertainment and activities scheduled across all four campuses.

Friday night’s entertainment schedule promises to delight even the youngest members of Sun Devil families, with its Disney-theme centered around the movie “Frozen.” A few highlights of Friday’s activities on the Tempe campus, all of them free, include:

• Off-Campus and Graduate Student and Family Picnic, 4-6 p.m.: Families are invited to bring blankets to enjoy this picnic on the lawn of ASU’s Student Services Building.

• MU After Dark presents Frozen in the Desert, 7 p.m.: This special Disney-themed event will feature games, music, treats and a showing of “Frozen” on Hayden Lawn. Expect a few surprises to make this a memorable ASU family night.

The fun continues into the weekend with many more exciting events. The Spirit Hike is one of the highlights of Saturday morning, offering a chance to take in breathtaking views, get a little exercise and experience a time-honored ASU tradition. Sparky and students from the ASU Student Alumni Association will lead the annual trek up “A” Mountain to help paint the iconic “A” gold in preparation for the game.

The Sun Devil Family Association’s Saturday morning event is the Second Cup of Coffee breakfast. Families get a chance to make new friends, learn how to stay engaged as parents and boost their student’s success with this social event. Find out more about the association's events at http://www.asuparentsassociation.com.

Families can share in Sun Devil pride and spirit during Devils on Mill, an exciting pre-game block party on Sixth Street and Mill Avenue. The event features carnival-style games and live entertainment for all ages. School spirit will be on full display at the traditional Family Weekend Tailgate barbecue and the home football game. This year, ASU will host Pac-12 rival Stanford.

On the academic side, there are opportunities to meet with faculty members and advisers through open houses and social events, along with campus tours and residential college activities. Barbecues, lawn games, lectures and open houses will take place across all four ASU locations.

More information on these events can be found at https://eoss.asu.edu/familyweekend or by downloading the free ASU Events App in the Google Play Store and the App Store for smart phones or tablets. While many of the events are free, some do require an RSVP.

ASU engineering professor Mark Henderson is honored with a humanitarian award for leading a program enabling students and faculty to aid communities in developing countries.

Mark Henderson’s colleagues and students said he was true to form in accepting the Tempe Sister Cities organization’s Making a World of Difference Award at the Tempe Center for the Arts on Oct. 9 for his humanitarian endeavors. 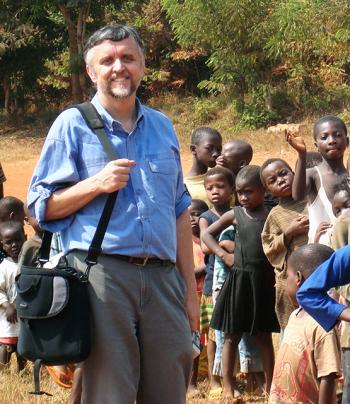 The Arizona State University engineering professor didn’t bask in the spotlight, but instead directed attention to people he has led and collaborated with in efforts to empower communities to improve their quality of life.

“The important thing is that this award is a chance for all of them to get recognition for the amazing work they are getting done through GlobalResolve, and I’m hoping that maybe this brings us more support and encourages more people to get involved with us,” said Henderson, who is on the faculty of the Polytechnic School, one of ASU’s Ira A. Fulton Schools of Engineering.

Henderson is the director of GlobalResolve, which he co-founded in 2006 with three fellow ASU faculty members, including engineering professor Brad Rogers, who became the program’s research and development director.

The group wanted to create opportunities to put the skills of the university’s engineering faculty and students to work helping communities in underdeveloped countries improve their living conditions.

Since then, GlobalResolve has gotten more than 500 students involved in such projects. Today, more than 200 students and 15 faculty members are participating each year in the social entrepreneurship and sustainability program.

They’re contributing annually to almost 50 projects in 10 countries that focus on upgrading communities’ infrastructure and resources for water, sanitation, energy, agriculture, health and education – and on boosting local economies.

Projects are in various stages of development in Ghana, Nicaragua, Mexico, Bolivia, Peru, Trinidad and Tobago, Nepal and Cambodia – and in Arizona (a solar energy project in the Navajo Nation).

The other primary mission of GlobalResolve, Henderson said, “is to give our students opportunities for life-changing experiences that make them more globally aware, and empower them to feel they can change the world just as much as anyone else can.”

Students said the goal is being fulfilled, due in large part to Henderson’s role as mentor and motivator.

“Mark really cares about changing the world. He is an inspiration. He has boundless energy, and he never runs out of passion,” said Kathleen Stefanik, a student in ASU’s Barrett, the Honors College, pursuing a degree in industrial and organizational psychology.

With Henderson’s guidance and help from other faculty and resources at ASU, Stefanik became founder and chief executive officer of GAIA International, a nonprofit humanitarian aid organization that is currently developing crop-production methods to help farming communities in Peru increase their crop yields.

She said Henderson has been a role model, showing her what skills are needed to make her efforts successful.

“He is one of those extraordinary salt-of-the-earth people who can connect with people anywhere in the world, and he can make the connections that are necessary to keep projects going, even in challenging situations,” she said.

Henderson “has this way of making people ambitious” about getting involved in solving difficult problems, said student Mentor Dida.

Dida earned a bachelor’s degree through the Polytechnic School program in electronics engineering technology with a concentration in alternative energy engineering. He’s now pursuing a master’s degree in the school’s global technology and entrepreneurship program.

He has been involved in projects to raise public awareness about the need to alleviate poverty, including an effort to empower young people to fight poverty in Kosovo, his native country.

Dida said he was motivated in part by Henderson’s teaching and mentorship to embark on those endeavors.

“He does more than show you how to apply engineering principles to solving problems,” Dida said. “He makes you understand how getting involved in these kinds of things can give meaning to your life.”

GlobalResolve is helping students understand the benefit of the social entrepreneurship and cross-cultural experiences for both the educational value and the sense of accomplishment, said electrical systems major Michelle Marco.

Marco came to Henderson to get involved and ended up starting the GlobalResolve student club. She’s now the club’s president.

She, along with Polytechnic School lecturer Gerry Polesky, is helping lead a project to improve living conditions in an orphanage in Peru, including building a greenhouse garden.

More than that, she adds, “You get to use those skills to help people. There is no feeling like knowing you have had a direct positive impact on people’s lives.”

She said Henderson is especially deserving of the Tempe Sister Cities award for his contribution to demonstrating that engineering is at its core a humanitarian enterprise.

He is helping lead the new program with other engineering faculty members Brad Rogers, Kiril Hristovsky, Nathan Johnson, Benjamin Ruddell and B. Ramakrishna.

Henderson describes the budding field as engineering that aims specifically to provide the technological solutions and other means to help struggling communities meet their basic needs and lift themselves out of poverty.

It’s also about engineers – collaborating with experts in other fields – finding solutions tailored to the cultural and sociological environments of specific communities.

Combining expertise from many fields

“We need more than engineers’ viewpoints. We need English majors and journalists, cultural anthropologists, liberal arts and nursing students and business students, in fact students from all majors, to mix with engineering students,” he said.

“We welcome participation by all faculty members as well, and have had great help in the areas of design and sustainability, for example, from John Takamura and Nalini Chhetri,” he added. Takamura is an associate professor in The Design School in ASU’s Herberger Institute for Design and the Arts. Chhetri is a senior sustainability scientist and climate change science manager with ASU’s Global Institute of Sustainability.

GlobalResolve leaders are already working on a new initiative to establish the Alliance for Global Impact. The plan is to create a network of universities that can take on humanitarian engineering challenges, mixing and matching the necessary expertise and resources from among the network’s members to tackle particular projects.

The alliance will work with the Peace Corps to identify regions and communities in need throughout the world.

“We would like to see thousands of students be exposed to developing countries so they could see all the opportunities that exist for them throughout the world,” said Rogers, the director of research and development for GlobalResolve.

Through his broad presence at ASU, Henderson may be in a position to draw in a more diverse contingent of students. In addition to his post at the Polytechnic School, he is an associate dean for the Barrett, the Honors College, a faculty affiliate for the School of Public Affairs and a senior sustainability scientist for ASU’s Global Institute of Sustainability.

Rogers has little doubt Henderson will continue to drive the growth of GlobalResolve.

“I can’t think of anyone more dedicated,” he said, “and Mark connects with students as well as anyone I’ve ever seen. He truly wants to motivate them to love learning like he does.”

Rogers said that as an increasing number of students work on GlobalResolve projects, “more of them are telling us ‘I think I’ve found my calling. I found what I want to do with my life.’ This is happening all the time now, and a lot of that is because of the commitment Mark is instilling in them.”