Each year, the National Science Foundation’s Dynamics of Coupled Natural and Human Systems (CNH) program provides funding for scientists, educators and engineers to study significant ways in which humans and the natural world interact. Two of the 20 projects chosen for funding this year are overseen by faculty in Arizona State University’s School of Human Evolution and Social Change in the College of Liberal Arts and Sciences. 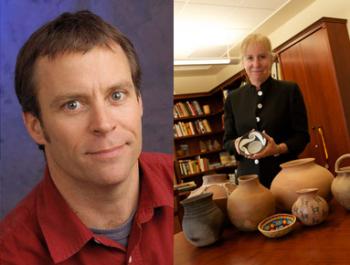 Nelson’s “The Complexities of Ecological and Social Diversity: A Long-Term Perspective” brings together archaeologists, ecologists and mathematical modelers to study which social and ecological diversity tradeoffs provide short-term efficiency and longer-term resilience. The project centers on five archaeological cases from the southwestern U.S. and northern Mexico, which offer protracted views of how social and ecological diversity affected these societies’ abilities to thrive or forced them into dramatic transformations when faced with different environmental or social stimuli.

“Using archaeological and ecological data and dynamic modeling, this research will discover if there are combinations of diversity in ecological landscapes and forms of social organization that make social-ecological systems more or less resilient,” explained Nelson, the vice dean of Barrett, the Honors College, and a distinguished sustainability scientist with ASU’s Global Institute of Sustainability.

Nelson’s team includes, as co-principal investigators, Anderies, ASU professor of archaeology Michelle Hegmon and Jon Norberg, research fellow at the Stockholm Resilience Center. Additional ASU faculty and graduate students, as well as scientists from across the nation and globe, are involved as senior personnel.

Anderies, a senior sustainability scientist with ASU’s Global Institute of Sustainability, has been awarded CNH funding for “When Strengths Can Become Weaknesses: Emerging Vulnerabilities in Coupled Natural Systems under Globalization and Climate Change.” The project will study how small-scale irrigation systems cope with change and evolve under pressure.

He believes his research findings will prove valuable in the real world by advancing a more nuanced understanding of the evolution of CNHs in terms of recognizing how, in becoming finely tuned to certain disturbances, small-scale agriculture systems become increasingly vulnerable to new disturbances induced by global change.

He noted, “Building on this insight through theoretical modeling, as well as case studies and field experiments from a wide variety of settings in the southwestern U.S., India, Nepal and Thailand, this project will develop a set of tools that will contribute to the capacity of policy makers to better anticipate emerging vulnerabilities and design learning and adaptive mechanisms to more effectively cope with change.”

Sarah Ruth, CNH program director in Geosciences, praised the selected projects and outlined their potential impact. “This year has another great set of projects that showcase interdisciplinary research,” she said. “By bringing together researchers from a wide variety of academic fields, the projects will provide valuable new insights into the ways in which we, our environment and the natural resources we rely on for our survival act as one interconnected system.”

The College of Liberal Arts and Sciences Gold team won the Academic Bowl, Thursday night, in the Eight, Arizona PBS studio, on the Downtown Phoenix campus, and took home $24,000 in scholarship money after successfully defending their championship title.

After an exciting weeklong event that brought close to 100 students together from all over the university to compete academically for scholarship money and school pride, the final rounds of the sixth annual ASU Academic Bowl served up some surprisingly familiar moments. 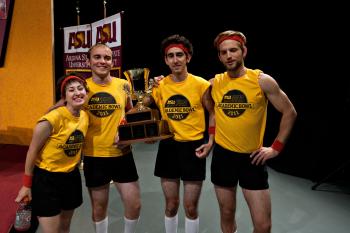 In the end, it was a battle between the veteran competitors – the Ira A. Fulton Schools of Engineering and both College of Liberal Arts and Sciences (CLAS) teams; the finals played out as they have in past years – CLAS against CLAS; and this year's winners of the title were last year's returning champions.

Elizabeth Langland, dean of the New College of Interdisciplinary Arts and Sciences, served as moderator for all the final rounds.

Clad in suit and tie, the Ira A. Fulton Schools of Engineering team took on the CLAS Maroon team in the first match of the semi-finals.

Engineering came alive on the board first, picking up 40 points with Russian literature. With more than 100 points racked up, Engineering effectively kept CLAS off the board until they missed a chemistry toss-up question, which CLAS was able to rebound. CLAS managed to catch up though through a series of won bonus questions about politics, health and musicals, with which they hurriedly provided correct answers. Soon, it was Engineering that was trailing and quickly needed to gain points.

After a lost question by CLAS, Engineering took over the driving and successfully answered a series of toss-ups and bonus questions to bring their score to 220 – a mere 5 points ahead of CLAS when the buzzer rang and the audience gasped. A deflated CLAS walked off the stage.

Donning athletic apparel – complete with sweatbands, tube socks, jump rope and a basketball – the CLAS Gold team arrived at the semi-finals ready to perform. (The only thing missing was the sound of the "Rocky" theme song.)

The first question of the match was missed by the W. P. Carey School of Business team, and so it was CLAS Gold that scored the first 10 points, which quickly became 20, 30, 50, 80 points. CLAS Gold kept up the winning streak – even doing the wave at one point – and netted 150 points before the Business team in suits could move past 0.

From political parties and religious holidays to math equations and poetry, CLAS Gold got them all. Mere minutes before time ran out, W. P. Carey answered a set of questions to gain 35 points – but it was not nearly enough to be a threat. At the sound of the buzzer, the scoreboard revealed the winner: CLAS Gold, 335 to W. P. Carey, 35.

The winning teams faced off in the third match of the semi-finals. In atypical fashion, CLAS Gold was not the first to score, but they did take the first lead of more than 60 points. Questions about islands, mountain ranges, films, politics, economics and sports brought the scoreboard to 175 to 85, in favor of CLAS.

With lightning speed, Engineering nearly doubled their score through well-earned bonus points and lagged CLAS by 50. Picking up the pace, CLAS took toss-up after toss-up, running the table like a veteran. Before Engineering had a chance to buzz in, CLAS Gold had swept them, 255-170.

But in a reality show twist, the judges flagged an error in a question posed by Langland and suggested a rematch. CLAS and Engineering agreed to restart the match at the point when the error in the questioning occurred. In the end, the final score was 245-170, CLAS.

CLAS Maroon wasted no time getting started. Answering questions about literature, grammar and vitamins, CLAS nabbed 90 points without taking a breather. W. P. Carey got on the board with 55 points after winning a couple of toss-ups. While the music of Igor Stravinsky and the poetry of T. S. Eliot helped W. P. Carey to a series of bonus points – bringing the score to 190-145 in the favor of CLAS – state governments helped the political science majors of CLAS regain their lead. The final score was 225-170, CLAS Maroon.

The CLAS Maroon team faced off against Engineering Gold for the second time of the night. Both teams were evenly matched as they sparred for toss-ups and racked up the bonus points. From "Star Wars" to history and the solar system, the teams took turns hitting the nail on the head, or just falling short.

Somewhere between "To Kill a Mockingbird" and the Wailing Wall, CLAS pulled ahead with a 65-point lead that was quickly stomped by Engineering. Once again, CLAS came back, then Engineering, as the audience watched the match in the way one observes a ping-pong game.

With a score of 255 to 195, CLAS Maroon sent Engineering Gold home.

By the final round, one thing was certain: the College of Liberal Arts and Sciences had, for the fifth consecutive year, won the ASU Academic Bowl. But which team would take home the trophy: Gold or Maroon? Off to a strong start, Maroon led Gold and showed off their pop culture savvy with television show trivia. But international history and politics was no weak spot for Gold, and they gained some ground on their maroon opponent.

A pensive-looking Maroon watched on as Gold caught up to 230 points and then surpassed them. Questions about the United States' current financial crisis gave Gold a sizable lead of more than 60 points, and when the buzzer sounded, the winner was Gold.

The final score was 315-230 – and the College of Liberal Arts and Sciences team is five for six.