Multimedia producer Victor Masayesva, Jr. (Hopi) is the featured speaker in the spring 2015 installment of the Simon Ortiz and Labriola Center Lecture on Indigenous Land, Culture, and Community. He will present "Indian Time," a talk, discussion and film screening at 7 p.m., March 19 at the Heard Museum in Phoenix.

Masayesva’s transdisciplinary work addresses the subject of calendars and time-keeping in modern and ancient eras. “Calendars are not only tools to measure time; they can also be magnificent instruments to connect cosmic time with human time,” he said. 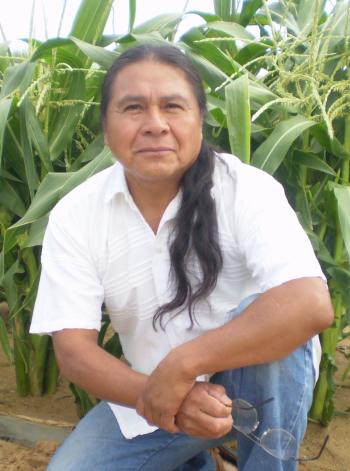 “They are doors that allow men to access the mystery of the cosmos and, at the same time, to correlate the activities of men with the rhythm of the stars. Indigenous peoples from the Americas have been tracking time since their arrival.”

According to Masayesva, the term “Indian Time” has been used to denigrate native people’s way of being and to keep them from inclusion in the dominant culture. But, he says, the notion of being “part of a larger order” of cosmic time-keeping can instead help indigenous youth celebrate their place within society.

“Over seven thousand years, [indigenous] lunar calendars have accurately determined ecosystems and agricultural cycles,” said Masayesva. “Their precise recordings of Venus as morning and evening star affirmed their ever-cyclic relationship with the cosmos above them and the underworld beneath. By reinvigorating the sense of cosmic time, we can initiate the dialogue that our individual existences are a part of the larger planetary consciousness and reclaim ‘Indian Time.’”

A member of the Hopi Tribe from Hotevilla, Arizona, Masayesva has been a life-long advocate for the ascendancy of the indigenous aesthetic in multimedia productions. He has promoted this aesthetic by curating programs at the Museum of Modern Art in New York City and serving as artist-in-residence at the School of Art Institute of Chicago, Walker Art Center, and Banff Centre for the Arts, and featured director and jurist at the Yamagata International Film Festival and the CLACPI Festival in La Paz, Bolivia.

Honored with the American Film Institute’s Maya Deren Award, Masayesva has been at the forefront of independent, experimental filmmaking in the Native American media community. His publications include “Husk of Time” from the University of Arizona Press, and his media work is included in the permanent collections at the Center for Creative Photography in Tucson, Arizona; the Museum of Modern Art in New York City; the Houston Museum of Art in Houston, Texas; and the Corcoran Gallery in Washington, D.C.

The Simon Ortiz and Labriola Center Lecture on Indigenous Land, Culture, and Community at Arizona State University addresses topics and issues across disciplines in the arts, humanities, sciences and politics. Underscoring indigenous American experiences and perspectives, this series seeks to create and celebrate knowledge that evolves from an inclusive indigenous worldview and that is applicable to all walks of life.

ASU sponsors include the American Indian Policy Institute; American Indian Studies Program; Department of English; School of Historical, Philosophical, and Religious Studies; Women and Gender Studies in the School of Social Transformation (all units in the College of Liberal Arts and Sciences); Indian Legal Program in the Sandra Day O’Connor College of Law; School of Art in the Herberger Institute for Design and the Arts; and Labriola National American Indian Data Center. The Heard Museum is our community partner.

Arizona State University Teachers College professor Michelene “Micki” Chi has been named the winner of the 2015 E.L. Thorndike Award for Lifetime Contribution in Research from the American Psychological Association.

Michelene “Micki” Chi, the Dorothy Bray Endowed Professor of Science and Teaching in the Mary Lou Fulton Teachers College, has been named the winner of the 2015 E.L. Thorndike Award for Lifetime Contribution in Research from the American Psychological Association.

Considered the association's most prestigious award for Division 15, it is given to living recipients for substantial career achievements in educational psychology. Chi will receive the award and deliver the award address at the association’s annual convention in August 2016 in Denver, Colorado. 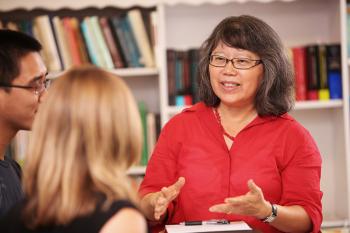 “I am still totally in shock and it’s awe-inspiring to be included among icons such as Jean Piaget, B.F. Skinner, Benjamin Bloom, John Bransford and David Berliner,” Chi said. “I am especially proud that two of us (Berliner) at ASU’s Mary Lou Fulton Teachers College are recipients of the Thorndike Award.”

The award is named for Edward Lee Thorndike (1874-1949), an American psychologist and educator at Teachers College, Columbia University. Thorndike’s groundbreaking work on comparative psychology helped lay the scientific foundation for modern educational psychology, and was a pioneer of employee exams and testing. Thorndike was also a former American Psychological Association president.

“It’s recognition for [Chi's] entire career as a senior scholar,” Urdan said. “The selection committee felt her contributions to the field are substantial as well as influential.”

“In a college where teaching and learning are of paramount importance, Dr. Chi’s work is especially significant and valued,” Koerner said. “Her research focuses on active learning as a model fits so well with the philosophy of what good educators have discussed for years. She is a modest person whose hard work and intelligence has constantly led the way for the learning sciences.”

Chi is the author of more than 120 academic publications. Her collective work has now been cited over 30,000 times. She is an elected member of the National Academy of Education and has five pending grants under review by the National Science Foundation and the Institute of Education Sciences. She has also won several awards and recognition for her work, most recently the Sylvia Scribner Award for work that has influenced the thinking and research in the field of learning and instruction, and the Wickenden Award for highest standards of scholarly research in engineering education. In 2001, Chi was cited in Carnegie-Mellon University’s Centennial Magazine as one of its most successful undergraduates.