Editor's Note: This story comes to us from the December 2011 edition of ASU Magazine.

When she enrolled in ASU’s French program in the 1980s, little did ASU alumnus Kristin Espinasse know that she would eventually tutor more than 42,000 students in the language and culture of France via the Internet. 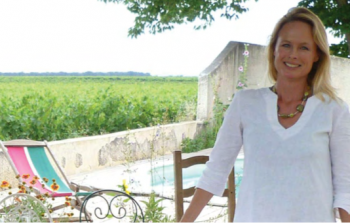 Her popular blog French Word-A-Day introduces those curious about Gallic ways to the country’s language via personal experiences, recipes, photos and other items. Her passion for all things French has led her to publish a book “Words in a French Life.”

Espinasse’s adventure began in the fall of 1989 when she spent the semester in Lille, France. She credits ASU’s grammar drills and language labs with preparing her well for the experience, thus increasing the benefits of the exchange program. She also notes that Dr. and Mrs. Wollam, her hosts during her initial excursion in the country, helped her extend her initial stay by facilitating independent study projects and encouraged her to “dig in” and really apply herself to learn the language.

After returning to ASU to complete her degree, Espinasse realized she had left her heart in France, quite literally. She returned to marry her husband Jean-Marc and start a family, two situations that have provided ample opportunities to polish her language skills.

“Being married to a French national – and rearing children on French turf – has greatly contributed to both perfecting the language and understanding the culture,” says Espinasse, who lives in Provence with Jean-Marc and children Max and Jackie.

One of the ironic benefits of raising children who are native French speakers is that they offer mid-sentence corrections of their mother’s grammar.

“The truth is I find it enjoyable to receive live ‘language edits’ from my kids,” she says, laughing. “I began learning French eons before they did ... only to be left in the dust of their spinning language wheels as they advance with finesse in the language of Proust!”

While admitting to missing certain aspects of the Arizona desert – including wildflowers, the red rock landscapes, roadrunners, quail and coyotes – she says she is very happy living at the “garage vineyard” her husband purchased five years ago. Recently, the couple was able to share their love of French wine culture with nearly 50 students from Napa Valley, Calif.

According to Espinasse, those inspired by her example can expand their knowledge of French by seeking out native speakers, participating in French “meet-ups” over the Internet, and immersing themselves in French movies and music. To would-be French speakers, she says: “Je vous souhaite beaucoup de succes (I wish you a lot of success).”

The Sun Devils will face the Bruins after a victory over the Trojans.

SUN DEVILS HEAD TO ANAHEIM TO MEET BRUINS
Sixth-year Sun Devil coach Herb Sendek and the Arizona State men's hoops team (5-9/1-1)) takes some positive energy to Anaheim for a 7:30 p.m. PT/8:30 p.m. MT game against UCLA on Saturday, Jan. 7, that will be broadcast by FOX Sports Arizona (Geeter McGee and Don McLean on the call). After posting just three 20-win seasons in the previous 25 seasons, ASU posted three 20-win seasons under Herb Sendek in his first five years. ASU's road win at USC Thursday is one of just two in Pac-12 games this year (2-14 with Oregon at Washington State the other). ASU quietly has the second-best field goal percentage defense (.401) in the league. More on the USC tilt to follow, but a stat line that is pretty eye-opening from Thursday: Trent Lockett with 19 points (7-of-9 from the field), nine boards, four assists and three steals in 39 minutes. He also made his only three-point attempt and all four of his freebies.

NOTES FROM USC TILT
ASU hit the hardwood Thursday without two starters (Keala King and Kyle Cain) and another top reserve (Chris Colvin) and had only six scholarship players available, but played one of its best road games in recent history with a 62-53 win at USC Thursday. It shot .611 from the field (22-of-36), the best performance in a road game since it shot .612 at USC on Jan. 17, 2004 (past 84 road games)...junior Carrick Felix had career highs in points (22) and blocks (four) in 39 minutes...ASU won at Galen Center for the first time in six tries..sophomore Jordan Bachynski matched a career-high with six rebounds...sophomore Chanse Creekmur played a career-high 37 minutes...freshman Jonathan Gilling posted a season-high 12 points in a season-high 33 minutes...junior Trent Lockett matched his career-high with 39 minutes and was 7-of-9 from field, made all four free throws, knocked down one three-point attempt, had nine boards, four assists and three steals to end with 19 points...junior Ruslan Pateev played a season-high 29 minutes...Arizona State attempted 36 field goal attempts, its fewest since it had just 35 on Nov. 18, 2008 at San Diego State. Prior to that you have to go back to Jan. 27, 1991, when it was 19-of-33 in a 58-47 win at Stanford for an amount less than 35 to get a grip of how odd that it.

NO SENIOR CITIZENS
Of the 338 schools playing Division I men's hoops, Arizona State is one of just nine without a senior according to NCAA stats czar Gary Johnson. The other eight are Albany (N.Y.), Binghamton, UC Irvine, Illinois St., St. John's (NY), St. Joseph's, Savannah State and Toledo.

THIS ISN'T NORMAL
ASU is averaging 16.6 turnovers per game, and that is unusual for a Coach Sendek team. ASU finished tied for second in the Pac-10 in fewest turnovers per game at 12.2 last year (USC was best at 11.4) and averaged 11.6 turnovers in final 15 games. It averaged 11.9 in 2009-10 (first in the league). ASU has not had a game this year where it has had less turnovers than the opponent.