Traumatic brain injury is currently revealed by using a series of physiological and cognitive tests along with standard medical imaging, such as magnetic resonance imaging (MRI). The techniques are excellent for diagnosis of moderate to severe traumatic brain injury, but less effective for diagnosing mild injury and for predicting the extent of its impact.

When approaching the problem from an engineering standpoint, one element missing from the diagnostic tool kit is the ability to detect signs of brain injury at the molecular and cellular levels. 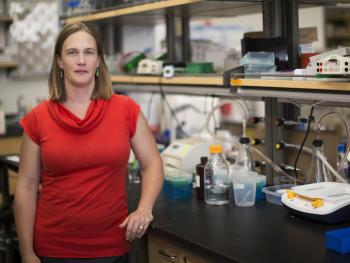 Biomedical engineer Sarah Stabenfeldt has received the National Institutes of Health Director’s New Innovator Award to support her work to develop such molecular tools. The award is designed to support creative investigators who propose innovative projects with high-impact potential.

Stabenfeldt is an assistant professor in the School of Biological and Health systems Engineering, one the Ira A. Fulton Schools of Engineering at Arizona State University.

More than 1.7 million people in the United States sustain traumatic brain injury each year, according to the Centers for Disease Control and Prevention.

Stabenfeldt has been studying possibilities of using nanoscale devices for enhanced detection and treatment of brain injuries ranging from mild to severe.

She is exploring the use of engineered nanobodies for this purpose. Nanobodies are therapeutic proteins derived from antibodies that contain structural and functional properties of naturally occurring antibodies. Antibodies are proteins produced by plasma cells that are used by the body’s immune system to identify and remove or neutralize harmful bacteria and viruses.

Her goal is to develop a nanoparticle system decorated with nanobodies that can be introduced into the bloodstream as “targeting probes” that have the ability to locate the molecular and cellular source of brain damage. Stabenfeldt describes the probes as similar to balls with Velcro or suction cups on them, facilitating the nanoparticles to attach themselves to the injured areas in the brain.

Once attached, they would then serve a multitude of functions ranging from diagnostic contrast agent for medical imaging to delivering doses of medicinal drugs to the area – drugs that would jump-start the healing process.

“The ability of nanobody probes to recognize the complexity and severity of neural injury to the brain at the molecular level has the potential to significantly impact diagnostic and therapeutic approaches for traumatic brain injury,” Stabenfeldt said.

The project is a complex undertaking that will require a range of biomedical and technical skills. The National Institutes of Health likely considered the diverse expertise of her colleagues in the Fulton Schools of Engineering in deciding to support her research, Stabenfeldt said.

She will also work with medical professionals at the Barrow Neurological Institute at Phoenix Children’s Hospital: Dr. David Adelson, director of the institute, and Jonathan Lifshitz, director of the Translational Neurotrauma Research Program.

The grant is providing $2.3 million to fund her work for five years. Beyond covering laboratory expenses, it will enable Stabenfeldt to provide biomedical engineering doctoral students opportunities to assist in the research.

The medal was established in 2006 by Crow to honor innovative leaders who have worked to advance awareness and action on issues that affect the well-being and positive development of their communities, and whose leadership has helped ASU in its effort to define excellence and inclusion and serves as a model to others for positive community impact. It’s a description that fits Pastor well, according to Crow. 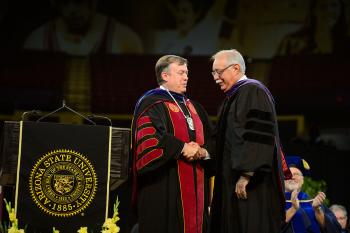 “Arizona State University is proud to present Rep. Pastor with the University Medal of Excellence in recognition of his dedicated leadership, the scope and meaningful impact of his life’s work, and his committed service to strengthening our nation, the state of Arizona and ASU,” Crow said.

Having learned firsthand the power of education to change lives and societies, Pastor has advocated over his 23 years in Congress and 39 years in public service tirelessly in support of educational opportunity nationally and in the state of Arizona. With his assistance, ASU’s research budget increased from $145 million in 2003 to $405 million in 2013. Further, he helped give ASU, one of the top Hispanic-friendly universities in the nation, a national voice as a university with a focus on Hispanic students. He spoke similarly on behalf of students and children who are Navajo in heritage. With his help, the ASU Indian Legal Program was established in the Sandra Day O’ Connor College of Law.

His efforts have fostered continual financial assistance programs like Pell grants, work-study opportunities and federally subsidized loans that are critical in access to higher education for many students, especially for underserved and underrepresented groups.

Civically, he has focused similar efforts for underrepresented groups, cultural preservation and sustainable living. A champion of energy research at the Southwest Center of Environmental Research, he encouraged support from the Environmental Protection Agency. Pastor also secured millions of dollars in funding for the Central Phoenix/East Valley light rail project, which interlinks the ASU Tempe and Downtown Phoenix campuses while reducing the cities’ carbon footprint.

Born in 1943 in the small mining community of Claypool, Arizona, Pastor is the son of a miner and the oldest of three children. He was the first in his family to attend and graduate from college.

Pastor graduated from ASU in the early 1960s with a bachelor of arts degree in chemistry and started his career as an educator at Phoenix’s North High. His career transitioned when he took a job with Guadalupe Organization, Inc., a community-based nonprofit. His work there with students, families and seniors motivated his enrollment in what is now the Sandra Day O’Connor College of Law at ASU, where he earned his juris doctorate degree in 1974. That same year, he joined the Maricopa Board of Supervisors, where he served three terms before resigning in 1991 to run for the Congressional seat vacated by the late Mo Udall. His subsequent victory made him the first elected Hispanic member of Congress from Arizona, and he became the senior member of the state’s delegation. He also became a powerful member of the House Appropriations Committee and a member of the Congressional Hispanic Caucus, serving as chair for his 1995 to 1996 term.