In an age when college students pick a major before ever setting foot on campus, Lauren Edgar took a circuitous route at Arizona State University to discover her passion for teaching.

Named an Outstanding Teacher Candidate by ASU's Mary Lou Fulton Teachers College, the talented and hard-working 2014 graduate plans to join Teach For America in June after having already produced classroom results that most educators strive for. 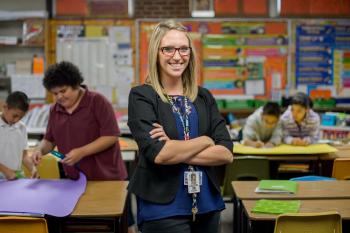 “Lauren has a goal-oriented mindset that produces exemplary work,” said Aaron Carman-Smith, ASU’s iTeachAZ site coordinator for Roosevelt and Isaac school districts in Phoenix. “She consistently exceeds expectations, yet is humble and always seeks feedback. Our other iTeachAZ teacher candidates see Lauren as a leader, and they look to her to share her ideas, teaching methodologies and resources.”

One of those ideas was an “AIMS math boot camp” Edgar developed for her fourth-grade students who had scored among the lowest in the school district on their third-grade Arizona's Instrument to Measure Standards (AIMS) math test. Edgar has spent the last year completing her student teaching residency, known as iTeachAZ, at V.H. Lassen Elementary School in the Roosevelt district under mentor teacher Linda Gayles.

“I created a mock AIMS math test for the students, and used that data to see what kind of help each child needed,” Edgar explained. “Then, I spent 15 to 20 hours tailoring the boot camp curriculum to each student and providing the kids with individual study packets.”

Edgar’s time and effort paid off when her students achieved 80-percent math proficiency – among the school district’s highest scores – in an assessment used to predict the next round of AIMS test outcomes.

“I had extremely high expectations for them, and I knew they could do it,” Edgar said. “I always tell my kids, ‘I’m on your team and I’m on your side.’ They know I’m a student, and I talk with them about that. It helps them understand that they don’t have to grow up in a place like Scottsdale to get a college degree. If they work hard enough, they can do it.”

Edgar knows from experience about hard work, having been employed full-time at The Westin Phoenix Downtown hotel while student-teaching nearly 40 hours a week and completing her ASU education classes. She said she has worked as many as three jobs at once while pursuing her college degree: “It’s been a huge learning experience that has tested my perseverance.”

Growing up in Portland, Ore., Edgar credits her single mother, who had no opportunity for a college education, with instilling in her daughter the drive to succeed.

“From the beginning, I had a very strong woman in my life who was relentless,” she said. “My determination to do the best that I can comes from her. As a first-generation college student, it was never a question of 'if' I would go to college, just 'how' I would make it happen.”

Edgar decided to leave the Northwest and come to ASU as a way to mature and expand her horizons. That she did, exploring a variety of majors – from nursing and retailing, with a minor in Italian, to public administration and pre-law – before finally discovering education.

“When I got into my education classes, I knew I was home,” she said.

Edgar explained that her academic journey at ASU taught her a lot about her own learning style, and that has inspired her approach to teaching. She said she found out that she learns best when instruction is very visual, auditory, hands-on and kinesthetic. Consequently, she is determined as a teacher to connect with individual students based on how they learn.

To help her fourth-graders visualize cellular structure, for example, Edgar bought jello molds and had the youngsters build their own cells using jello, green M&M’s, raisins and Whoppers. She also used her own resources to purchase batteries, wire and light bulbs so her students could build simple electronic circuits in order to understand how they work.

“Being able to see the lights work, to physically see that, was so critical,” Edgar said. “I just gave them the materials and let them experiment. I kept asking, ‘What’s happening here?’ It took their unit vocabulary words off the page and connected them to something they did.”

After graduation, Edgar has committed to becoming a Teach For America corps member for at least two years, assigned to Dallas, Texas. According to the TFA website, 90 percent of the student population in the Dallas Independent School District receives free or reduced lunch, and only 14 percent are prepared for college. According to Edgar, it’s a perfect fit.

“For me, I have grown passionate about working in Title I schools, surrounded by communities with strong cultures,” Edgar said. “I share the same core values as Teach For America, both in what I want to achieve and what I want to provide for my students.

“I want to see what I can learn from the students, parents and community that will help me develop as a teacher. I don’t feel I’m done learning.”

See the full list of ASU graduates who are becoming Teach for America corp members.

Born in the outskirts of Havana City, Cuba, Oscar Patterson-Lomba came to the United States with the goal of becoming a scientist whose work changes people's lives for the better.

Born in the outskirts of Havana City, Cuba, Oscar Patterson-Lomba came to the United States with the goal of becoming a scientist whose work changes people’s lives for the better.

“Leaving my family and country was the most difficult decision I had ever taken, but I was determined to come to a country where, with some luck, dreams and aspirations are reachable through hard work and commitment,” he says. 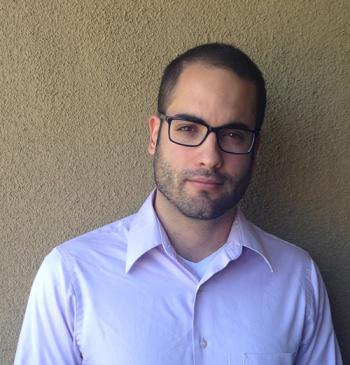 Now, six years after emigrating, Patterson-Lomba is set to graduate from Arizona State University with a doctorate in applied mathematics for the life and social sciences.

During his time at ASU, he has earned a reputation as an exemplar of cross-disciplinary scholarship. He studies some of today’s most profound health issues using tools and concepts pulled from areas such as mathematical and computational epidemiology, evolutionary biology, dynamical systems, stochastic processes, statistics and network theory.

His research revolves around a variety of subjects related to the development of mathematical and statistical models to study the spread and evolution of infectious diseases. In particular, he has dedicated his research to unveiling and quantifying statistical patterns of sexually transmitted diseases in urban areas; studying the population-level impact of drug resistance on the effectiveness of treatment strategies; and developing novel statistical frameworks for the estimation of influenza incidence using digital syndromic data.

Patterson-Lomba points to his mother, a medical doctor, as one of his major inspirations. From her, he inherited an interest in medicine and health. Beginning at an early age, he was drawn to mathematics. Later, he “became excited to know that there was a subject that, through the use of mathematics, aimed to explain the phenomena around and within us: physics.”

Though he enjoyed studying physics, his interests shifted slightly when introduced to the idea of using mathematics to investigate biological phenomena, specifically in the area of cancer research. When he later discovered mathematical epidemiology and its role in public health policy, he found the perfect fit for his interests and ambitions.

“Mathematical epidemiology encompasses many of the subjects that I am fond of,” he explains. “In addition, it is a relatively new area – at least compared to physics – where interesting contributions can still be made, with the potential to have important implications on public health.”

At ASU, Patterson-Lomba has built an impressive academic foundation in mathematical epidemiology. Yet, his path to college was a challenging one.

After coming to the United States, he was unable to attend school immediately, so he found work wherever he could. He installed windows in Miami Beach condos, baked cupcakes in Manhattan and waited tables in New Jersey.

A year after his arrival, he signed up for two classes at Newark Community College. A semester later, he was accepted into Montclair State University and was able to finish his bachelor’s degree in physics, which he had initiated at Havana University, Cuba.

During his last year at Montclair, he attended the summer program offered by the Mathematical and Theoretical Biology Institute in ASU’s College of Liberal Arts and Sciences. His intellectual gifts and dedication were noted by the institute’s founder and director, Regents’ Professor Carlos Castillo-Chavez.

He offered Patterson-Lomba a place in the applied mathematics for the life and social sciences program he directs in the School of Human Evolution and Social Change.

During his time as a graduate student at ASU, Patterson-Lomba has visited and worked at some of the most respected institutions in the country, including the Harvard School of Public Health, the Massachusetts Institute of Technology and the Santa Fe Institute. He credits Castillo-Chavez with making these opportunities possible and linking him up with some of today’s most acclaimed scientists.

“Interacting with esteemed researchers, mentors and colleagues from these institutions and ASU has not only had an immense influence on my maturity and success as a scientist, but also on the refinement of the values that guide my existence, making me feel a step closer to the person I long to become,” he notes.

Sherry Towers, a member of Patterson-Lomba’s committee, has the highest praise for him as an individual and a scholar.

She points out, “He independently decided upon his thesis research topic, and he has always had a very clear vision of the importance of his work and how it fits into and extends the existing academic body of work on the subject.”

His 200-plus page dissertation on infectious diseases in the context of urban environments and drug resistance was hailed by Castillo-Chavez as “a beautiful contribution to theory, public policy and epidemiology.” The Regents’ Professor also says that Patterson-Lomba’s work exemplifies the university’s “access, excellence and impact” model.

Next up for Patterson-Lomba is a postdoctoral appointment at the Harvard School of Public Health. He intends to focus his efforts toward more immediate and direct ways in which to inform public health policy. He also plans to apply mathematical modeling to some unresolved research questions, such as understanding how inequalities in health care access can affect the spread and control of infectious diseases.