Editor's Note: This story was taken from zocalopublicsquare.org.

We’ve reached a pivotal moment in our understanding of what life is. Biologist and entrepreneur J. Craig Venter, one of the scientists responsible for bringing us to this point, explained what this moment means at an event co-presented by Arizona State University at the Heard Museum – and the path that brought him here. 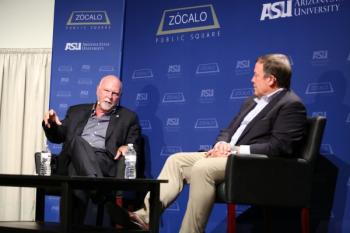 ASU President Michael M. Crow, the evening’s moderator, opened the discussion in front of a full house by asking Venter how he went from serving as a Navy corpsman in Vietnam to running three scientific institutes – and predicting that human beings will one day reproduce organisms synthetically.

“As you might imagine, it wasn’t a linear route,” said Venter. As a medic in Vietnam, he learned that knowledge is critical to saving lives. His plan was to attend medical school, but got hooked on science instead as an undergraduate at UC San Diego. Publishing a scientific paper on how adrenaline works “was the most thrilling thing I’d done,” said Venter – a self-identified “adrenaline junkie.”

Today, said Venter, we can interchange the digital code of ones and zeroes with the four-letter code of DNA. “DNA is our software,” he said. “Every species on this planet is a software-driven system.” And our ability to transition between the digital and DNA worlds has huge implications: Today, biology can be sent through the Internet.

Venter and his team are now in the process of sequencing thousands of human genomes each year so that by 2020, we will have millions sequenced. This data, he said, will give us the ability to know precisely “what’s nature and what’s nurture” within the next decade.

“It will be overwhelmingly tempting for humanity to refrain from using this knowledge to modify our species,” said Venter. He referred to a survey from 15 years ago in which a surprisingly large number of respondents said they’d choose to genetically modify their children. It’s not unreasonable to want to eliminate lethal diseases that are not treatable, he said, but other traits pose problems. Manic depression is a disease that’s difficult to treat, yet people who are manic depressive are also among society’s most creative. Could curing manic depression wipe out the creativity of our species? We’re a long way from having the knowledge we need to take such steps, cautioned Venter.

Venter’s current research interests include human longevity and how we can extend the healthy, high performance human life span. There is no a priori reason that biological systems have to wear out, said Venter: “There’s no reason to think there’s an absolute, finite limit on human life.”

And what exactly is synthetic life? Crow asked Venter to explain how he created a bacterial cell entirely out of synthetic DNA.

Venter explained that his team took a common bacterium, removed the operating system, and put in a synthetic operating system. Then, measuring every protein in the cell, they found there wasn’t a single protein from the original cell. “You change the software” – the DNA – “you change the species,” he said.

The idea of creating new life forms comes with serious ethical and safety concerns. Crow, referring to Isaac Asimov’s “Three Laws of Robotics,” asked Venter if he had rules of engagement for synthesized life.

Asimov’s rules for governing robot behavior sort of apply, said Venter. We’re trying to create things to help humanity, not eliminate it. And we don’t want the things we create to become weapons of war, he said.

What, asked Crow, are your worries about human enhancement?

Venter noted that a knee replacement is a kind of enhancement. But he does have concerns: In the new do-it-yourself biology movement, people perform experiments at their kitchen sinks that previously would have been limited to laboratories. Ebola only has eight genes, said Venter; could kids, trying to be wise guys – like computer hackers – try to synthesize the Ebola virus?

“Our society tends to very quickly trivialize things,” said Venter, “and forget the ethics and the implications and the broader impact on society because it’s Kardashian time or something. We need to be smart about these decisions.”

Fifty or 100 years from now, said Crow, when most of the things you’ve dreamt have occurred – and the impact has been a net positive – what will be the most fundamental and significant changes resulting from digital biology?

Venter said that it was impossible to answer the question without looking at biology as a whole. The way the world works now, if digital biology extended our lifespans to 250 years, we would quickly overwhelm the planet. But, if we could use sunlight and carbon dioxide as our carbon sources instead of coal and oil, perhaps we could find a way to increase our lifespan in a way that’s healthy for humans and the planet.

Digital biology has the potential, Venter said, to create a new Industrial Revolution. We’re not just trying to change life but all human processes. “It’s a giant experiment, and hopefully we’ll be smart about it,” he said.

The audience question-and-answer session included more queries about ethics and the possible dangers of synthetic biology.

How could a synthetically created virus be stopped?

Venter said that we’re in far more danger from new emerging infections than we are from synthesized viruses. Synthetic biology already has combatted such infections: When the H7N9 flu virus broke out in China, Venter’s team successfully created a vaccine based on a digital copy of the virus Chinese scientists sent to the U.S. We can now transport viruses without putting people in danger – and transport vaccines, too.

What can we do about scientists who don’t share Venter’s ethical concerns dealing in genetic engineering?

Venter said that society faces the same challenges with any technology. “You can kill somebody with a hammer; you can build a hospital with a hammer,” he said. The U.S. does have stopgaps in place to monitor do-it-yourself scientists, and laws that govern lab practices.

The rules aren’t that complicated, he said – but scientists must learn them, and must work in the proper environment to ensure that their experiments are performed safely and without catastrophic consequences for society at large.

Current Arizona high school and Arizona State University students are invited to participate in a video competition to showcase the importance of college.

Current Arizona high school and Arizona State University students are invited to participate in a video competition to showcase the importance of college. The “What is College?” video contest asks students to share their understanding of college and what it takes to get there.

The top three videos in the high school and ASU categories will be awarded cash and ASU scholarship prizes. 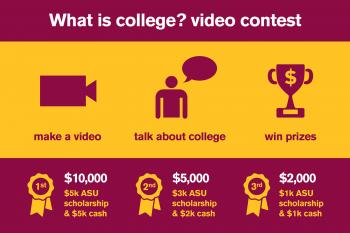 To submit an entry:

1. Make a three-minute video.
2. Answer the "What is College?" question, available at eadvisor.asu.edu/videocontest.
3. Upload your video and complete the online form.

The deadline for the competition is Sept. 30. For full contest guidelines and sample questions, visit
eadvisor.asu.edu/videocontest.