ASU’s College of Liberal Arts and Sciences’ Department of English and the Center for Science and the Imagination will host an intimate conversation and fundraising event with actor Nathan Fillion on the importance of reading in the lives of young people.

“Serenity, Softwire, and the Science of Science Fiction” will feature Fillion as well as ASU professors Dr. Jim Bell, Dr. Ed Finn, Dr. Peter Goggin and Dr. Sara Imari Walker, and will be facilitated by science fiction author PJ Haarsma, who penned the popular “Softwire” series. The event takes place at 8 p.m. on Saturday, June 7, at ASU’s University Club, 425 E. University Drive, Tempe. Parking is available in the University Club lot at no charge on a first-come, first-served basis. Additional parking will also be available in the Fulton Center garage across University Drive; fees may apply. 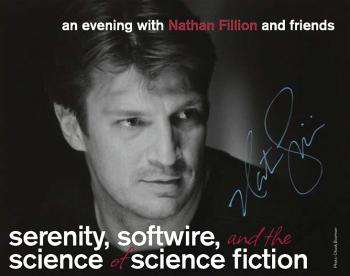 The engagement is limited to a small group of 50 guests and the cost is $250 per person. Hors d'oeuvres and cash bar will be provided. To purchase tickets: http://asufoundation.org/serenity.

“The evening should prove to be a fascinating fusion of science, science fiction and literacy,” said James Blasingame, a professor of English who organized the event. “Nathan Fillion is not only a famous actor of several science fiction television and movie hits, but also an active supporter of school reading programs. Guests will also have the opportunity to pose questions to discussants and interact with them during a brief social in the University Club.”

Fillion is a Canadian-born actor best known for his role as Richard Castle on the ABC series "Castle," as well the FOX television series "Firefly" and its feature film continuation "Serenity."

He has also acted in Steven Spielberg’s World War II epic "Saving Private Ryan" and the comedy "Blast From The Past." In addition to film and television, Fillion has acted in Internet-distributed films, soap operas, theater and video games.

Fillion grew up the son of English teachers in Alberta, Canada, and attended Concordia University College of Alberta and the University of Alberta, where he became active in local theater and improv comedy. He made his screen debut in the 1993 television movie “Ordeal in the Arctic.” He relocated to New York, where he landed a role in “One Life to Live” and garnered a Daytime Emmy nomination in 1996 as Outstanding Younger Leading Man.

In the spring of 2009, Fillion starred as a novelist who joins forces with a detective to solve mysteries in the ABC series "Castle."

Net proceeds for “Serenity, Softwire and the Science of Science Fiction” will benefit the ASU Department of English Fund and will be deposited with the ASU Foundation for a New American University, a nonprofit organization that exists to support Arizona State University.

Arizona State University President Michael Crow was among the officials participating in the official launch of the Bilateral Forum for Higher Education, Innovation and Research, held May 21 in Mexico City.

All members were in Mexico to discuss growing ties between the U.S., Mexico and other Latin American countries in education and innovation.

Goals of the event included increasing student mobility, consolidating links among researchers and developing joint research and innovation projects. The forum was part of an agreement signed by President Obama when he visited Mexico in May 2013.

The forum was designed to increase the amount of university-to-university connections, including academic exchanges for students, professors and researchers, and innovation and technology transfer. One of the goals outlined in the Obama agreement was to increase the number of students who travel to study abroad from the U.S. to Mexico and from Latin American countries to the U.S. to 100,000.

Secretary Kerry said during a press briefing on the visit that it was very helpful because participants worked together to set “a real agenda, a real set of objectives that will see more students from America study here in Mexico and more Mexicans study in America, that will see us have more research and innovation projects where we create the jobs and the opportunities of the future.”

“We share a border and many common interests with Mexico,” President Crow said. “It’s natural that we seek stronger ties through education, research and innovation so we can help each other prepare for the challenges and the changing nature of the advanced workforce of the 21st century."

Crow was accompanied at the forum by Arizona Regent Greg Patterson and ASU adviser Rafael Rangel Sostmann, former president of Tec de Monterrey – one of the leading universities in Mexico.

The forum was attended by several officials from higher education, including Janet Napolitano, who heads the University of California System and is the former U.S. Secretary of Homeland Security and former Governor of Arizona.