Dubbing the mash-up “Beauty and the Beast,” the Arizona State University Department of English presents two separately offered spring 2015 hybrid courses – one on Frankenstein and the other on Jane Austen – in the same time slot, to help students make the most of their packed schedules.

Both literature-based offerings meet from 9 to 10:15 a.m., Tuesdays and Thursdays, alternating in-class and hybrid days. Students may take just one course or both. 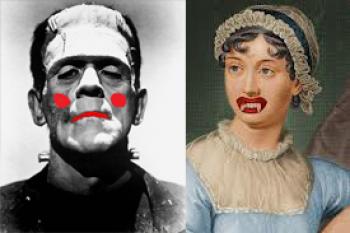 “Frankenstein and Its Others” (ENG 401) is taught by Mark Lussier, professor and chair of the English department. His course meets in person on Thursdays and online on Tuesdays. Students will delve into not only the written works about this “hideous progeny,” but will uncover how the Frankenstein novels influenced classic cinema as well.

Texts to be explored include Mary Shelley’s “Frankenstein” (which inspired many others), as well as Percy Shelley's "Prometheus Unbound," Robert Louis Stevenson's “Dr. Jeykyll and Mr. Hyde” and H. G. Wells' “The Island of Dr. Moreau.” Film adaptions of these works include “Gothic” (1986), “Blade Runner” (1982) and “Frankenstein Unbound” (1990), among others.

In celebration of the upcoming Frankenstein bicentennial (1818-2018), this class is a unique starting point for the university’s bicentennial project, exploring the intersection of science and literature to bring the creature alive once more.

“Jane Austen (Women & Literature)” (ENG 364) introduces all things Jane Austen in an unusual team-taught structure, meeting in person on Tuesdays and online on Thursdays. The course, jokingly described as “married couple argues about Austen and tries to teach you something in the process,” is instructed by Austen scholars Devoney Looser and George Justice, who are husband and wife. They are both professors of English; Justice also serves as dean of Humanities in the College of Liberal Arts and Sciences.

Texts to be discussed include Austen’s “Pride and Prejudice,” “Sense and Sensibility,” “Emma,” “Persuasion” and shorter works, including her raucous juvenilia. The course will explore Austen’s humor, irony and social criticism, looking at the ways she’s been used in popular culture.

In answering the questions, “Why is Jane Austen so popular?” and “Is she just the author of ‘chick lit,’ best served up with zombies or vampires?” the course dissects historical and contemporary Jane Austen fandom. Looser and Justice hope that students come away with knowledge about Austen and about how reading her can inform new understandings of literature, love and life.

Maria Harper-Marinick and Sharon Megdal were named Morrison Institute Distinguished Fellows at the State of Our State Conference and Luncheon, Friday, Nov. 7.

Maria Harper-Marinick and Sharon Megdal were named Morrison Institute Distinguished Fellows at the State of Our State Conference and Luncheon, Friday, Nov. 7.

“We are so pleased both leaders accepted our invitation to join the Distinguished Fellows circle,” said Thom Reilly, director of the Morrison Institute for Public Policy at Arizona State University.

The Morrison Institute is a statewide leader in examining critical issues for Arizona and the region, and is a catalyst for public dialogue. The title of Distinguished Fellow was created in 2012 to not only recognize Arizona’s best and brightest in public policy, but also to tap into their knowledge and expertise.

Harper-Marinick is executive vice president and provost for the Maricopa County Community College District and a member of the advisory board for the Latino Public Policy Center. She serves on several boards and councils, including as chair of the federal Advisory Committee on Student Financial Assistance by appointment of U.S. Secretary of Education Arne Duncan.

“Maria is a tireless proponent for better schools and brighter futures,” Reilly said. “Anyone who’s involved in education knows Maria. She seemingly is everywhere – wherever and whenever she’s needed to push education forward, especially Latino education.”

Megdal is director of the University of Arizona Water Resources Research Center, as well as C.W. and Modene Neely Endowed Professor in the UA College of Agriculture and Life Sciences. She is also finishing up her elected term as a member of the Central Arizona Water Conservation District, is a former member of the Arizona Corporation Commission and current president of the National Institutes for Water Resources.

“With her wealth of knowledge and experience on water and economic issues, Sharon brings so much to the table,” Reilly said. “We are especially pleased she has joined the advisory board executive committee for the new Kyl Center for Water Policy at Morrison Institute.” The Kyl Center for Water Policy, made possible by a $1 million gift from the Morrison family, was officially launched at the conference, with a mission to seek consensus for wise water policy and lasting solutions for Arizona.