Huang took second place and Sanyal took third place in a competition for which students designed posters to  illustrate details of their research projects in the area of nanoscale science and engineering. Twenty-nine student researchers participated in the competition. 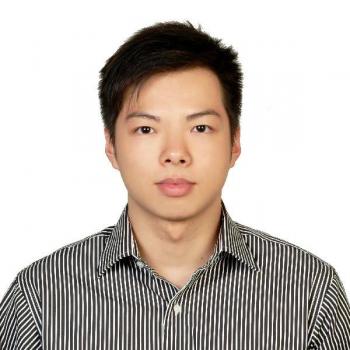 Huang and Sanyal are in the chemical engineering program in the School for Engineering of Matter, Transport and Energy, one of ASU’s Ira A. Fulton Schools of Engineering.

Huang is working on two branches of chemical engineering research.

He’s also involved in research funded by the U.S. Defense Threat Reduction Agency Reduction Agency to develop nanoparticle-based materials for use in sensing radiation and potentially dangerous materials such as sulfur-containing compounds that can be used as chemical warfare agents.

This year marked the third time Huang has won an award in the research poster competition at the American Institute of Chemical Engineers annual international gathering.

Sanyal is helping to experiment with the use of nanoparticles as “delivery vehicles” for medicines, dyes and inks. The work is useful in the development of sensing devices to provide targeted delivery of medicinal drugs, and in processes that require separation of chemicals.

Huang’s research mentor is assistant professor Kaushal Rege. Sanyal is collaborating with Rege on her research and working under the mentorship of associate professor Lenore Dai, chair of the chemical engineering program.

“The recognition earned by Joe and Sriya are well-deserved. Their work is exceptional and their success reflects on the quality of our chemical engineering graduate students,” Dai says.

Want to organize an event fast? There's an app for that

Want to organize an event fast? There's an app for that

The inventors of Eventor want to give people a social media tool to help them get more socially active.

The idea is “to help get people away from their computers and into the real world” to interact in person, says Yunsong Meng. 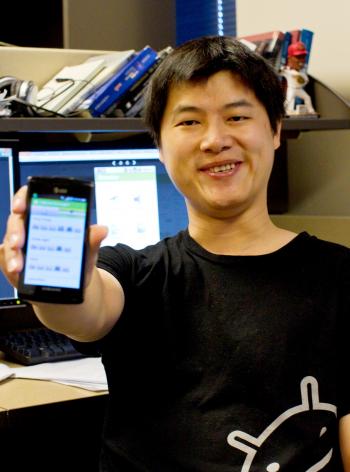 Meng is pursuing a doctoral degree in computer science in the School of Computing, Informatics, and Decision Systems Engineering, one of Arizona State University’s Ira A. Fulton Schools of Engineering.

He and two recent graduates of ASU’s computer science and engineering doctoral program have developed Eventor. It’s a mobile social event organizer Android application for smartphones, designed to enable people to easily plan events and activities – whether an Ultimate Frisbee game or a study group.

Users can send requests from their phones to the cloud, describing “what they want to do, when, where and with whom,” Qin explains.

As an example, Qin describes the process of using the Eventor app to find people interested in playing basketball and then organizing a game.

“A user can create interest by specifying the time, location, and other requirements that apply to the proposed game,” he says. Once the request has been created in the mobile cloud, it provides a way for others who want to join the game to connect.

If another user makes a separate request to organize a basketball game, “Our cloud-based system will match these requests and send real-time notification to both users so that they can be aware of each other and communicate,” Qin says.

Eventor compiles information from Facebook friends – along with lists of a user’s interests and information about the kinds of events they’ve attended – to match people who would be interested in joining or organizing particular events.

Restrictions can be placed on who can participate in an event if a user wants to invite only certain people.

“For instance, if you want only your Facebook friends, or people who speak Spanish, you can specify those things and Eventor will send notice of the event only to the people who match that description,” Meng says.

Eventor reinvents the concept of a search function, Qin says.

“With the old style you type in some queries and you get a list of results that already exist in the system. So then you need to go through each result on the lists to see if that's what you want,” he says.

“With Eventor, you don't search. You tell the system what you want and the system searches for you, not only for existing matches in the system but also for future matches,” Qin says.

The Eventor team’s motivation for developing the app arose from the difficulty they had finding people who shared their interests.

“It all started with the three of us having nothing to do, and thinking there are probably a bunch of others like us who didn’t have an easy way to find each other,” Meng says.

They began the project when they were all still in school, but Qin and Zhao moved away from Arizona after they graduated, requiring a long-distance collaboration to finish a prototype of the Eventor app.

Maintaining communication and teamwork got harder. “We’ve had to accommodate each other’s schedules and put a lot more extra effort in,” including late-night video conferencing, Meng says.

Creating more than 50,000 lines of computer code to complete the work, Meng found himself allocating his days to his studies and nights to developing Eventor. After a year the team produced a first-stage prototype and an updated 2.0 version of Eventor.

Now they’re planning to provide the app to a number of ASU students to see if it catches on. By gauging how frequently and successfully students make use of Eventor, its creators plan to make any necessary improvements before trying to move the app into the marketplace.

They believe there’s a sizable market for the social media service Eventor provides, since most social media focus only on linking people but are not made specifically for easily organizing activities.

The team is now working on adapting the application for iPhone users.

For more information, see the Eventor website. Check out the “Robots Talking About Eventor” video and see the link to download the app.