Engineering students in final round of international innovation competition

About 1,700 teams from throughout the world entered the 2012 Dell Social Innovation Challenge for student entrepreneurs. Now only five of them – including a group of Arizona State University engineering students – remain for the final round of competition June 8-12 at the University of Texas at Austin.

Team 33 Buckets is comprised of mechanical engineering senior Paul Strong and four biomedical engineering students – team leader and senior Pankti Shah, senior Varendra Silva, senior Mark Huerta and junior Connor Wiegand. They will vie for the prizes of $50,000, $20,000 and $10,000, to be awarded to the first-, second- and third-place winners, respectively, at the Dell Challenge finals. 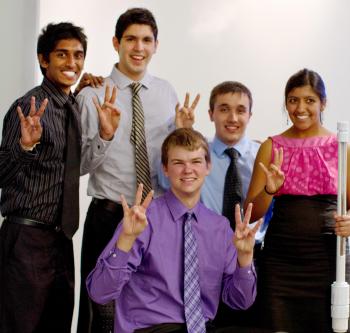 The team was formed through the Engineering Projects in Community Service (EPICS) program in ASU’s Ira A. Fulton Schools of Engineering. It was one of eight EPICS teams that were among the 200 teams chosen in the spring as Dell Challenge semifinalists.

33 Buckets derives its name from the atomic number of arsenic and the use of buckets in a particular filtration system. Its project is development of a low-cost, efficient and easily maintained filtration system that will remove bacteria and debris – most importantly arsenic  –  from tainted water wells in Bangladesh, where a quarter of the population is exposed to harmful amounts of arsenic, making it a leading cause of death in the country.

The team’s efforts are focusing first on the Rahima Hoque Girl’s School in the impoverished rural village near Dhaka in Bangladesh. The young students face health risks as the price of their education due to high arsenic concentration in the local water supply.

The filtration system is designed to produce 4,000 gallons of clean drinking water each day, which would leave the school an additional 2,000 gallons to sell to the village to raise funds for improving the school and for replacing the filter components as needed.

The idea for the project came from Enamul Hoque, a native of Bangladesh who earned a master’s degree in civil and environmental engineering from ASU in 1985 and now owns the Hoque & Associates engineering firm in Phoenix. The E.M. Hoque Geotechnical Laboratory at ASU is named for him.

Hoque accompanied the 33 Buckets team to Bangladesh for eight days in May to do field research for building a prototype of the filtration system and to establish a relationship with the school and the local community.

“I had never been to a Third World country before, so it was a lot to take in,” says team member Huerta.  The team was greeted with warm hospitality and genuine gratitude by the villagers, he says.

The trip included visiting the University of Dhaka to make contacts with students and faculty members who live and work near the area where the team’s project will be implemented. One professor agreed to work with the team to test water samples periodically to ensure the quality and productivity of the filter.

Based on their experience in Bangladesh, the team is making alterations to their project plans in preparation for the Dell Challenge finals competition.

The director of ASU’s EPICS program has already been recognized by the Dell Challenge organization. Richard Filley recently won an honorable mention in the international 2012 Dell Social Innovation Education Awards.

He is one of only three honorable mention winners – in addition to an overall award winner – selected from among about 100 people who were nominated. The award recognizes dedication to supporting and mentoring students involved in developing innovative solutions to social problems, fostering creativity in classroom teaching methods and dedication to building institutional support for social innovation education.

Under Filley’s direction more 20 students teams working through EPICS have won awards and start-up funding for their entrepreneurial and public service endeavors.

Two other EPICS teams received $1,000 for People’s Choice Awards in the Dell Challenge semifinal round: Project TOTO and FlashFood.

Project TOTO is designing structurally sound tornado shelters out of steel shipping containers. FlashFood is using a mobile-phone application to connect restaurants, catering services and banquet halls that have excess or leftover food  with volunteers who will transport it for distribution to people in need.

The Social Innovation Challenge was established in 2007 by the RGK Center for Philanthropy and Community Service in the LBJ School of Public Affairs at The University of Texas at Austin. In 2008, the Dell computer technology corporation joined the program as the title sponsor.

Its mission is to support promising young entrepreneurs who are working to help solve the world’s most challenging social problems.

Over those years, more than 15,000 students from 90 countries have teamed up to enter more than 3,000 projects in the annual competition.

This year 33 Buckets will compete against:

Arizona State softball moved past the Oregon Ducks, 3-1, in the opening round of the Women's College World Series, May 31.

In the first inning of the ASU softball team's 10th Women's College World Series appearance, the freshman duo of Amber Freeman and Haley Steele gave the Sun Devils a quick 1-0 lead. Freeman plated Steele with a deep double to right center, bringing Steele around from first base for the first run of the game.

The double is Freeman's eighth of the season and bumps her RBI to 41 on the year. A two-out rally in the third added cushion to the Sun Devil lead, 3-0, after Freeman reached on an infield Duck error, allowing Katelyn Boyd and Talor Haro to score, unearned. Haro reached with on a single while Boyd via walk.

Dallas Escobedo went the distance to pick up the win in a five-strikeout performance, making her 24-6 on the year. Oregon's Jessica Moore takes the loss and falls to 32-14 but fanned three Sun Devils along the way.

Oregon rallied for a single run, unearned, in the top of the seventh after an ASU error. The Ducks got on the board down 3-1 after Christie Nieto came home during a Jamie Rae Sullivan at-bat.

Friday's session three of the 2012 Women's College World Series is sold out, but fans still have a chance to catch the games as a limited number of standing room only tickets will go on sale June 1 at 2 p.m. CT.

Tickets are $17 each and can be purchased at the ASA Hall of Fame ticket booth. Sales will not be conducted online or over the phone. Friday's action begins at 6 p.m. with top-seeded California taking on fourth-seeded Oklahoma. The evening's second game will feature the No. 2 seed, Alabama, against Arizona State.