Arizona State University honors student and engineering major Madeline Grade has been awarded one of the most prominent post-graduate scholarships given to college and university students in the United States.

The Marshall Scholarship enables “young Americans of high ability” to pursue graduate studies at their choice of a leading university in the United Kingdom. 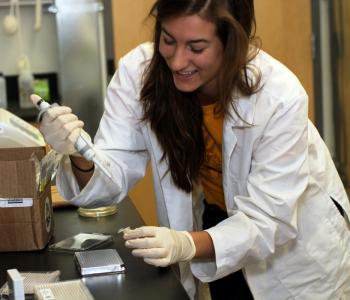 The scholarships fund two to three years of study toward a graduate degree. No more than 40 U.S. students are awarded the scholarships each year – only about 5 percent of the number of students who are nominated by their universities.

Grade (pronounced Grah-dee) is a senior in ASU’s Barrett, The Honors College, and is on course to earn an undergraduate degree in biomedical engineering in spring 2012 through the School of Biological and Health Systems Engineering, one of ASU’s Ira A. Fulton Schools of Engineering.

“Madeline is exemplary for her commitment to making a real, positive impact on the world,” says assistant professor Kevin Bennett, chair of the biomedical engineering program. “The passion, creativity, and leadership she’s shown over her years at ASU have helped shape our school culture.”

She is “one of those students who comes along only once every four or five years,” says associate bioengineering professor Michael Caplan, citing the level of excellence Grade has achieved in academics, community service, research and involvement in student organizations.

So are her ambitions.

Grade says she wants to earn a medical degree, becoming a physician who both leads clinical research and treats patients. On the way to that goal, she plans to undertake graduate studies in neuroscience and pursue projects in the areas of systems biology, man/machine interface and optogenetics.

Her record of accomplishments during her ASU undergraduate years indicates she is capable of handling such a demanding workload.

Grade, the 2008 valedictorian at Gilbert High School in her hometown of Gilbert, Ariz., has earned nearly straight A’s in the university courses related to her major. She is an ASU Presidential Merit Scholarship winner and has been a Mayo Clinic Premedical Scholar since 2009. She also has been a Mayo student-researcher and assisted in the Brain Dynamics Laboratory at ASU.

She was accepted into Alpha Eta Mu Beta, the biomedical engineering honor society. She has served as outreach coordinator and president of ASU’s student chapter of the Biomedical Engineering Society, and co-founded the Ambassador program to support the biological and health systems engineering school, which has included assisting current students and recruiting new students.

She has twice won the  Excellence in Engineering Leadership Scholarship from the Ira A. Fultons Schools of Engineering and the Hans Hartjens Scholarship, which is awarded in part based on a student's commitment to community service.

Her community service activities include work for PROJECT C.U.R.E. (Commission on Urgent Relief & Equipment), testing and packaging donated medical equipment for undeveloped countries, and for the ASU student chapter of Engineers Without Borders, helping design water-distribution and sanitation systems for a rural community in Ecuador.

She has also tutored middle school and high school students in the Phoenix metropolitan area in science, engineering and math.

In addition, Grade has represented ASU’s engineering schools as a senator in the university’s undergraduate student government.

She was selected to give a presentation at an American Academy of Neurology meeting – an opportunity rarely offered to an undergraduate – on the epilepsy research she has participated in at ASU and the Mayo Clinic.

“That experience was incredible. It really opened my eyes to all of the interesting research going on in the neuroscience world,” Grade says.

She plans to study at University College London’s world-renowned UCL Institute of Neurology, housed at the National Hospital of Neurology and Neurosurgery in Queen Square. She’ll focus on neuroscience and clinical neuroscience and will assist in research at the hospital.

“I'm particularly interested in the application of engineering principles to medical treatments for the brain, such as deep brain implants for epilepsy treatment,” she explains.

Grade has worked with physician Katherine Noe, an assistant professor of neurology at the Mayo Clinic College of Medicine, who is a consultant for Mayo’s Division of Epilepsy. “Madeline is tremendously talented. She will be a wonderful ambassador for Arizona and for women in science, engineering and medicine,” Noe says.

Grade is “thrilled” about the Marshall Scholarship and says she “definitely would not have been able to accomplish so much as an undergraduate without the support of my mentors at ASU and Mayo."

ASU’s biomedical engineering and honors student programs “have given me incredible opportunities, and the Marshall program will be a fantastic next step,” she says. “I’ll definitely miss ASU, but I'm excited for a new experience in London.”

The Marshall Scholarships program was founded by an act of the British Parliament in 1953 and named in honor of U.S. Secretary of State George C. Marshall.

The scholarships are meant to commemorate the humane ideals expressed in the Marshall Plan – the American program to aid Europe’s recovery after World War II – and to express gratitude from the British people to their American allies in the war.

The program’s goals include enabling “intellectually distinguished young Americans” to study in the UK as a way to foster and strengthen relations between the two countries and their future leaders.

In his third year as a full-time employee at the Translational Genomics Institute (TGen), Alexis Christoforides, renders class work to real-world application.

Christoforides began his relationship with TGen as an intern during his senior year as an undergraduate computer science major at ASU’s Ira A. Fulton School of Engineering. Established in 2002 by President and Scientific Director Jeffrey Trent, TGen applies innovative advances arising from the Human Genome Project to discover the molecular basis of disease, identifying factors contributing to disease progression and severity, and accelerating new drug development to advance clinical treatments for patients. TGen is an institutional partner of ASU BMI.

TGen's research focuses on a variety of diseases, including Alzheimer's, autism, diabetes and multiple subtypes of cancer.

Christoforides focuses on cancer research through the lens of algorithm and data design. Currently he is completing a project that detects mutations in a cancer patient's tumor. Information from the DNA can point to the cause of the disease as well as potential treatments. TGen researchers are already employing the code in a proactive bench-to-bedside manner that can guide clinical decision-making.

Christoforides describes projects at TGen as “intimate and specialized,” giving him the freedom to implement and design his experiments with a unique approach.

Despite facilitating independence, projects are symbiotic in nature. Christoforides said he often seeks feedback from colleagues, and in turn has been called upon for assistance.

His next project is to create a knowledge base of cancer genomic data.

“My boss [at TGen] has this contagious enthusiasm,” Christoforides said. “He helped me be able to stay working at TGen full-time, and to be a student as well.”

Interns and employees at TGen have the supplementary opportunity to attend external conferences relating to the field.

“It’s cool to read papers from people you’ve met [at conferences] or vice versa,” Christoforides said. “Some researchers you meet at conferences are sometimes willing to help and collaborate on your own research.”

Internships at TGen are available in all areas of translational bioscience: laboratory and clinical research, computational biology and bioinformatics, mathematics and statistics, and research administration.

There are two routes for students to take to be involved at TGen:

- The Helios Scholars Program at TGen is a paid, eight-week summer internship in biomedical research open to Arizona high school, undergraduate, graduate and medical school students. Interns work full-time on a research project under the mentorship of a TGen scientist to unravel the genetic components of diabetes, neurological disease and cancer.

- Academic year internships are prearranged and performed under the supervision of TGen personnel. Internships for qualified high school, undergraduate and graduate/medical students are available in Communications, IT, Education & Outreach, Business Development and Regulatory Affairs departments.

Noting TGen as a friendly environment that encourages professional growth, Christoforides would recommend anyone interested in bioinformatics or genomics to consider TGen.

"There is no better place to be in Arizona," he said.