It’s a question that lingered in a young boy’s curious mind: Why do the lights go off?

That boy, Ibrahima Diop, grew up in the West African nation of Senegal. Electricity was a scarce resource and power outages were frequent. 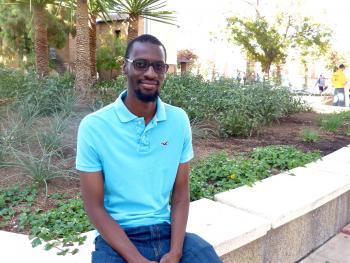 “I would watch the lights go off, and I just needed to figure out why,” Diop said. “That is how my fascination with electricity began.”

Now a young man, Diop looked back at that time as he prepared to graduate from Arizona State University with his degree in electrical engineering in December. It was a distinctive path that brought him here, made possible by the MasterCard Foundation Scholars Program.

The program is a $500 million, 10-year initiative to educate and prepare young people – particularly from Africa – to lead change and make a positive social impact in their communities. Africa as a continent has the world’s youngest population, with 62 percent under the age of 25. Its economy is flourishing and in need of skilled workers, yet it faces the lowest secondary and university education enrollment rates.

ASU is one of the schools in the program, with 70 MasterCard Foundation Scholars currently enrolled, 22 in engineering. Diop was among the first class in 2012, and is the first undergraduate student to graduate.

A good student with an interest in math and science, Diop was focused on going to college. He looked toward the United States, which he knew had good schools, and an uncle in Arizona made the Valley of the Sun a good place to call his second home.

Before he became a Sun Devil, Diop attended Chandler-Gilbert Community College, where he earned his associate of applied science in engineering technology.

Though he did not know the English language – Senegal being a French-speaking country – he would excel as both a scholar and an athlete.

“The language barrier, yes, that was a challenge,” Diop said. “How do you exchange ideas? And it would take me two, three times as long to understand math word problems.”

Diop overcame challenges of language – he now speaks fluent English – the Arizona heat and a new culture, to become an Academic All-American on his school’s soccer team, with a 3.7 GPA.

With a desire to continue his education, Diop learned of the MasterCard Foundation Scholars Program, and the Ira A. Fulton Schools of Engineering became a perfect fit.

He credits Bassam Matar, instructor in ASU's School of Electrical, Computer and Energy Engineering and engineering professor at Chandler-Gilbert Community College, for his guidance, advice and for “being a good father figure” who helped him excel and reach his goals.

Along the way, Diop learned why the lights went out. He learned what it takes to turn a fuel source, such as coal or solar, into electricity, and how complicated and fascinating it is to transmit and distribute the power.

“The Senegal power plants where set up by the French during colonization and they are outdated,” said Diop. “It is fixable. But it can’t be just one or two people. You need political leadership, knowledgeable people and an economic structure that is viable.”

The future of Senegal, and Africa, is in the hands of young people like Diop, who will go back home to contribute and hopefully lead change. The MasterCard Foundation Scholars program, he said, is a “wonderful program that brings like-minded, ambitious people together who could be potential leaders of Africa. We will stay connected, and who knows where we will end up? Only borders separate us.”

Looking back, could he ever have imagined he would be a college graduate and an engineer?

“If I use the situation I was in, what my eyes were telling me, there is no way for this to happen. All the reasons were there for me to fail,” Diop said. “I have a strong belief that God always provides a way out, as long as you are doing the right thing."

Mike White, a professor in the School of Criminology and Criminal Justice, is scheduled to address members of President Obama's Task Force on 21st Century Policing.

Mike White, a professor in the School of Criminology and Criminal Justice at Arizona State University, is scheduled to address members of President Obama's Task Force on 21st Century Policing. 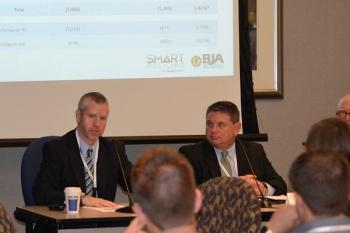 "They are having experts come in and talk about a range of different issues in regards to police practices with particular regard to minority communities," says White. "My specific assignment is to speak to the task force about the key pressing research issues that the task force should think about with regard to body-worn cameras."

White is the author of a Department of Justice analysis of police camera studies, considered the most comprehensive to date.

He and criminology professor Charles Katz have also been asked to guide federal efforts to create a website and tool kit for police agencies to implement the use of officer-worn cameras.

"It's a great honor," says White. "This is a big deal in terms of police community relations, and there is this kind of ground swell of energy and momentum. The fact that the Department of Justice and the White House is bringing in academic experts to engage in the dialogue and lead the conversation is very rewarding."

White and Katz have considerable experience guiding police efforts nationwide through the ASU Center for Violence Prevention and Community Safety, part of the College of Public Service and Community Solutions. The two professors have provided research and training to police as part of the Department of Justice SMART Policing Initiative, which helps police incorporate evidence-based practices to improve policing outcomes.