A self-proclaimed hippie from Boulder, Colorado, ASU student Courtney Van Bussum is a locavore and at her happiest when hiking, perusing farmers markets, or practicing and teaching yoga as a certified yoga instructor.

“The general consensus in Boulder, Colorado, is that if you aren’t outside hiking or inside doing yoga, you’re probably doing something wrong,” said Van Bussum who will be a junior in the fall, majoring in biomedical engineering at Arizona State University’s Ira A. Fulton Schools of Engineering within Barrett, The Honors College. 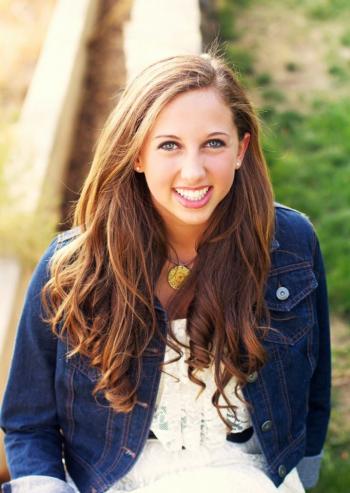 It was only natural then, that health and wellness became a driving force for Van Bussum’s startup FitStart Kids, a unique healthy-living tool for children struggling with obesity. It combines wearable activity-monitoring technology with mentorship, education and built-in gamification to help children adopt a healthy mindset.

In 2012, more than a third of American children were categorized as obese or overweight. Worldwide, children are spending more than two hours looking at screens, exceeding the suggested limit by pediatricians. Van Bussum wanted to harness children’s growing obsession with technology to bring about a behavior change.

“I like to say FitStart Kids is changing the ‘game,’” she said. “We are expanding upon the world of virtual gaming by directly integrating fitness into the game itself. We are leveraging youth’s fascination with technology to shift gaming systems from being a reason for hours spent sitting in front of a screen, to instead act as the catalyst to get kids moving."

Here’s how it works: FitStart Kids uses Fitbit activity trackers to equate steps to incentives and rewards that can be used to buy upgrades, bonuses or new features within the virtual game environment. Participants design their own unique character or avatar in the game, are paired with a mentor, and placed on a virtual team. They can challenge teammates and compete against other teams to win prizes, while receiving bonuses from answering health questions and meeting nutrition goals.

Brent Sebold, who is the director of the Fulton Engineering Startup Center and has mentored Van Bussum and team, said that even though FitStart Kids is still in its initial developmental stages, it’s gaining momentum.

“Courtney was recently selected as the Student Innovation Winner for the Social Venture Partners Fast Pitch Challenge, winning $2000 toward the venture,” he said. “As part of Fulton Schools’ Prescott Fellows program, she also flew to Silicon Valley with other ASU students to meet and gain advice from successful entrepreneurs, startups and incubators.”

Additionally, Van Bussum is also one of only 22 students from across the country selected by the Women’s Business Enterprise National Council to be part of their 2015 Student Entrepreneur Program cohort and one of the five finalists at the program’s pitch competition.

According to Scott Shrake, director of the EPICS (Engineering Projects in Community Service) program, FitStart kids has come a long way since starting as an EPICS design challenge that focused on finding creative ways to help combat childhood obesity.

“Courtney has been passionate and focused on making a difference in the area of health, and the EPICS program has given her a vehicle to let her true talents and abilities shine,” said Shrake. “She’s a rock-star and I can’t wait to see what else she accomplishes.”

Van Bussum credits the extended community she found at ASU for her success thus far.

“It is only with the help and support of the passionate individuals I have met at ASU that I have even gotten this far,” she said. “I would encourage any student who wants to make a startup idea happen or anyone who wants to be on a startup team to just start. The experience and insights gained alone are invaluable.”

Many animal lovers dream of becoming veterinarians, but some realize during college that there are other ways to interact with animals. Susannah French, a 2006 alumna of ASU's School of Life Sciences, chose one such path and is now an assistant professor at Utah State University studying reptiles and their environment.

Many animal lovers dream of becoming veterinarians, but some realize during college that there are other ways to interact with animals.

Susannah French, a 2006 alumna of Arizona State University’s School of Life Sciences, chose one such path and is now an assistant professor at Utah State University studying reptiles and their environment. 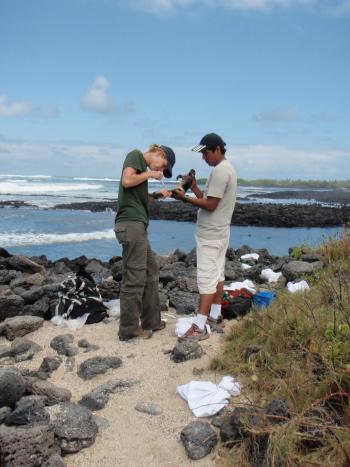 French, a 2006 alumna of Arizona State University’s School of Life Sciences who is now an assistant professor at Utah State University, draws a blood sample from an iguana. Photo by: Trevor Brown Download Full Image

“As an undergraduate, I became really interested in scientific research and wanted to pursue it further in a graduate program,” French said. “I was fascinated by how animals use different internal and behavioral mechanisms to survive diverse environments.”

That interest directed her to ASU’s doctoral biology program in the school. As a graduate student, she learned the skills needed to run her own lab, conduct independent research and obtain funding. French said the thing she enjoyed most about her time at ASU was the diversity of her peers’ research and the lasting bonds created while working together.

“The integrative nature of the School of Life Sciences allowed for a lot of interactions with students performing other types of research,” French said. “I’m still collaborating with a behavioral neuroscientist and several fellow physiological ecologists who are friends from SOLS.”

French said her mentors, including professors Pierre Deviche, Glenn Walsberg and Dale DeNardo, provided the critical guidance and support she needed to advance her career.

“My interactions with them were invaluable to my research and training as an academic,” French explained. “I still contact them today when I need advice, and I have adapted different parts of my own mentoring style from theirs.”

After earning her doctorate, she accepted a post-doctoral research associate position at Indiana University, where she was funded by a National Institutes of Health fellowship. There, French initiated a research project in the Galapagos Islands focused on how reptiles adapt to environmental disturbances – a project that is still ongoing.

When the fellowship concluded, French was drawn to an opening at Utah State that offered a perfect mix of research, teaching and outreach.

“My main focus now is research, but I still get to teach the courses I love best and got me interested in physiology,” French said.

French said mentoring students is her favorite part of the job – and thanks to her ASU experience, she is ready to teach the next generation what it means to be a researcher and professor.

Global Engagement The College of Liberal Arts and Sciences Alumni