Among certainties about life in the desert Southwest are that the supply, use, conservation and management of water will always be pressing issues.

So it’s certain that Arizona State University and Ira A. Fulton Schools of Engineering alumnus Michael Johnson will have a hand in shaping Arizona’s future. 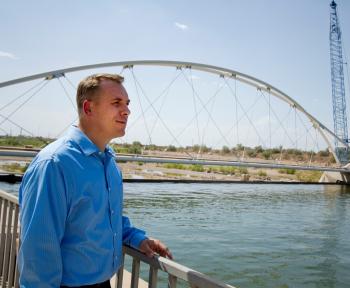 After earning his master’s degree in 1997 and a doctorate in 2000 in civil engineering, Johnson went to work for the Arizona Department of Water Resources. Today he’s chief engineer and assistant director for the agency’s division of engineering and water-use permits.

“What I like about this job is that I don’t have a narrow focus. I have the opportunity to get involved in almost all aspects of water management,” Johnson says.

In addition to the engineering duties and administration of the use-permit system for surface water and groundwater, his division oversees dam safety, flood warning and floodplain management operations.

The division also aids state courts in adjudicating the nature, extent and priority of more than 96.000 water-rights claims filed within the Gila River and Little Colorado River systems and sources.

Johnson is helping to provide a road map for meeting the state’s long-term water development and management needs. He and other Department of Water Resources staff are supporting the Water Resources Development Commission established last year by the Arizona Legislature. The commission recently completed an extensive analysis of Arizona’s projected water needs for the next century.

He’s also involved in water management at the federal level. Johnson is a member of a national review board that advises the Federal Emergency Management Agency on dam safety and security priorities. He was recently elected to the board of directors of the Association of State Dam Safety Officials. The nonprofit organization supports dam safety efforts and works to raise public awareness of dam safety issues.

Johnson’s office is sometimes thrust into the public spotlight during headline-making emergency events. Among the most prominent incidents was in 2010 when the Rio Salado Dam in Tempe burst open. The dam break sent the contents of Tempe Town Lake spilling for miles down the Salt River bed, draining the major urban recreation and tourist attraction near ASU’s Tempe campus.

He and his crew were responsible for overseeing replacement of the dam.

“Our job was to make sure the cause of the failure was fully understood and to see that the dam was rebuilt with protections in place to prevent the lake from draining dry like that ever again,” Johnson says.

His multi-faceted responsibilities have required him to use everything he learned at ASU, where his engineering studies concentrated on environmental and geotechnical engineering, hydrology, dam safety, soil and aquifer treatment processes and groundwater recharge.

It was an ASU dam safety analysis project for the state Johnson assisted in as a student that led the Arizona water resources agency to offer him a job after he earned his doctoral degree.

“All of this work [for the state] is challenging, but I consider myself fortunate,” he says. “You really feel like you are performing an important public service.”

Of the many students ASU civil engineering professors William Houston and Sandra Houston have taught over the years, they remember Johnson as one who stood out for superior performance both in the classroom and the research lab.

“Michael was nothing less than a brilliant graduate student,” says William Houston (now professor emeritus). “He was an especially dedicated researcher who was always determined to get the job done right and to make real contributions to solving problems.”

Paul Johnson, dean of the Ira A. Fulton Schools of Engineering, says he’s “not surprised to see Michael in his leadership role with state, given that my first interaction with him outside of the classroom involved an unusual project funded by Arizona Department of Water Resources that required the containment and control of a large amount of water.”

The dean recalls Johnson as “a bright and hardworking student whose interests spanned many areas of civil engineering. It’s great to see those interests have translated to career success. He exemplifies what we hope all of our students become – dedicated professionals who have a positive impact on society and who give back to the engineering profession.”

Johnson today uses what he learned from his ASU engineering professors about teaching and mentorship in his efforts to help others in the engineering profession in Arizona. For more than a decade, through his involvement in the Phoenix chapter of the American Society of Civil Engineers, he has taught professional development courses to fellow engineers.

The courses prepare his students for an exam they must pass to become licensed registered professional engineers –allowing them to perform engineering consulting work directly with business clients.

Johnson says he found he enjoys teaching when he returned to ASU as an adjunct faculty member to instruct several graduate-level classes a few years after completing his own schooling.

A critical lesson he tries to impart to all his students: “Don’t get tunnel vision. Don’t look at engineering as strictly about coming up with technical solutions to technical problems,” he says.

True success as an engineer requires learning the “human dimension” of the profession, he explains.

“In the real world, good solutions do not mean simply coming up with the best technical answers. There are always overarching societal issues that come into play,” he says. “When you make decisions, you have to factor in the impact your choices will have on all the different people who will be affected.”

It’s the “real-world applications” that Johnson says attracted him to the branch of engineering he chose.

“In civil engineering you can get outdoors, you get out in field where you can see the problems you are trying to solve,” he says. “You get to build big things that you can see and feel, and you get to work with nature to provide something useful to society.”

For a successful engineering career, Johnson says it’s also important to have interests outside of work that provide a break from responsibilities and deadline pressures.

For Johnson, that involves spending time with sons Andrew, 12, and Matthew, 10 – time that often involves sports, biking and boating trips.

With a demanding job and the responsibilities of parenting, Johnson says, “it’s difficult to juggle everything, but I find it all very rewarding.”

This article first appeared in Full Circle, the alumni magazine of the Ira A. Fulton Schools of Engineering.

Ashley Kastl had the Sun Devils on cruise control as the squad toppled Oregon State at home.

The Arizona State University volleyball team played on their best games of the season on Saturday, defeating Oregon State in three sets (25-23, 25-17, 25-10) at Wells Fargo Arena.

Ashley Kastl finished with 17 kills while Erica Wilson added 11 of her own as the Sun Devils (6-20, 2-14 Pac-12) finished with a .336 hitting percentage to earn their second conference victory of the season.

ASU tallied 48 kills on the night, its most in a three-set match this season.  It was also just the third time this year the Sun Devils had won in three sets.

The team closed on a 3-1 run from there to end the set on the heels of seven Kastl kills, nearly half of the team’s 16 first-set kills.

The second set saw the team ride the momentum of the first, jumping out to a 14-7 lead and never looking back en route to a 25-17 set victory heading into the break.  Kastle added six more kills to her total in the set as the team as a whole had just two errors to 16 kills while hitting .483 from the floor.

From there, ASU was on cruise control as the squad dominated the final set that wasn’t even close, 25-10.

ASU’s hitting percentage on the night was by far their best of the season after hitting a previous season’s best of .308 against Oregon last night.

The Sun Devils will be back in action next Friday, Nov. 11 against Colorado as they continue their home stretch at Wells Fargo Arena.