Emerge 2014 seeks creative projects for a 'Carnival of the Future'

In our digital, globalized world, are we on the verge of the triumph of the empowered individual? Or are we hurtling towards a future dominated by complex networked systems that reduce people to mere bits? ASU’s Emerge 2014 is seeking proposals for spectacular and thought-provoking projects that provide fresh, aesthetically engaging insights on "The Future of Me."

Emerge 2014 will host two, evening-long "Carnivals of the Future," the first in downtown Phoenix on March 7, 2014 and the second in Southern California later in March. The carnivals will be radically playful and challenging, offering up a variety of tangible visions of the future world we actually want to make. The events will feature cutting-edge performances and swarming, flying technology along with experiences that obliterate the traditional boundaries between engineering, arts, sciences and humanities. 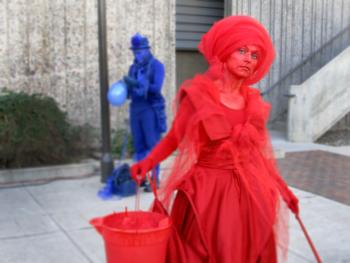 “We are really excited to invite everyone to step inside of a circus tent and see, hear and touch the future,” says Ed Finn, director of the Center for Science and the Imagination and one of the co-directors of Emerge. “Carnivals are creative, playful spaces that ask everyone to step a little outside of their comfort zone and try something spectacular and daringly new.”

Projects for Emerge 2014 may include, but are not limited to, physical and digital installations, engineered constructions, interactive pieces, performance art, scientific extravaganzas, sculpture, video art, games and dance. All projects should exhibit intellectual fusion and collaboration across the sciences, arts, humanities and engineering. Several winning teams will be awarded funding of up to $10,000 to build, document and exhibit their work at both Carnivals of the Future in March 2014. To submit a proposal, visit emerge.asu.edu/proposal.

Emerge is co-directed by a creative, interdisciplinary team: Joel Garreau, Lincoln Professor of Law, Culture and Values at the Sandra Day O’Connor College of Law and affiliate faculty member at ASU’s Consortium for Science, Policy and Outcomes; Ed Finn, director of the Center for Science and the Imagination and assistant professor of Arts, Media and Engineering, as well as  English; and Cyndi Coon, faculty associate in the School of Art and president of Laboratory5, an arts consultancy headquartered in Tempe, Ariz. Emerge also benefits from the guidance and input of experts drawn from across the spectrum of ASU’s schools and colleges.

Emerge was founded in 2012 by a team of collaborators from across ASU, and was expanded in 2013 to include a diverse array of partners from the ASU community and beyond. Emerge 2014 will feature a select group of inspiring, immersive, dazzling projects that come together under a big tent to create an unforgettable one-night experience.

Each year, Emerge is built around a unifying theme that guides a series of creative and investigative projects. In 2013, Emerge tackled "The Future of Truth" and the stories we use to make sense of a complex world. The theme for 2014, "The Future of Me," responds to a moment in which individuals have more power to control their environment, share information and connect with one another than ever before. Simultaneously, and strangely, they also find themselves increasingly caught up in massive networked systems that they do not fully understand, and cannot hope to control. Emerge 2014 will explore questions of individuality, autonomy and freedom, as well as control, automation and facelessness.

“Emerge 2014 challenges engineers, artists, scientists, designers, story tellers, ethicists, humanists, makers and futurists to not just talk about the future in which we all can thrive, but build it,” says Joel Garreau, a founder and co-director of Emerge. “Emerge is a flagship demonstration of ASU’s claim to be the nation’s foremost silo-busting university.”

To learn more about Emerge, submit a proposal, or get involved as a volunteer or participant, visit emerge.asu.edu. To see more images from Emerge 2013, visit our gallery.

Recent Arizona State University graduate Courtney Peña is on a trajectory to make a difference.

Having earned both her bachelor’s and master’s degrees at ASU, the Phoenix-area native heads to Stanford University this fall to pursue her doctorate under the tutelage of one of the nation’s most eminent experts on Spanish-English bilingualism, professor Guadalupe Valdes. Peña credits her years at ASU as laying the groundwork for her doctoral research aspirations.

It was as an undergraduate that she first realized the power of academic research to illuminate social issues. Through ASU's School of Human Evolution and Social Change, Peña worked on the South Mountain Village Community Study – a network of interdisciplinary researchers, their students and community stakeholders – to address health and environmental challenges in the South Mountain community.

As part of the project, funded by the National Science Foundation, she conducted extensive one-on-one bilingual interviews with families in South Phoenix. Peña said that collaborating with Seline Szkupinski Quiroga, then assistant professor in ASU’s Transborder Chicano-Latino Studies (now School of Transborder Studies) and co-principal investigator for the project, was particularly inspirational.

“It was because of her that I familiarized myself with research, how to go about it and the importance of it,” Peña explained. “I learned so much from that opportunity. I was gaining a lot of experience that would transition me to where I am now. But at the time, I didn’t realize that was what was happening.”

Shortly after, Peña became a research specialist in the School of Transborder Studies where she contributed to an exploratory study on the contributions of Mexican-origin and Puerto Rican Ford Fellowship scholars in the 1970s-1990s and over the course of their careers. The research, led by Carlos Vélez-Ibáñez, director of the School of Transborder Stuides, with research professional Elsie Szecsy, is scheduled for publication in the Journal of Hispanic Higher Education.

“Since I was responsible for the literature review, I learned quite a bit about the state of Hispanics in higher education,” Peña said. “We looked at all of the issues affecting the college graduation rate of Hispanics – such as poverty, low-income schools, lack of preparation – starting with their K-12 education. Then we followed subjects all the way through their university years as they assumed tenure-track professor and administrative positions.

“What the research found is that Hispanics are underrepresented everywhere in higher education, not only as students, but also as professors and administrators. We found only three to four percent of college faculty and administrators in the United States are Hispanic, while Hispanics constitute one sixth of the nation’s population.”

Before transferring to ASU, Peña worked full-time while attending Mesa Community College part-time to earn her associate degree. She was a Spanish major undergraduate in the School of International Letters and Cultures at ASU, working on a minor in transborder Chicano-Latino studies.

Peña focused much of her graduate research at ASU on Arizona’s Proposition 203 and how structured English immersion (SEI) affects the learning process of English language learner (ELL) students. The initiative measure was passed into law by 63 percent of Arizona voters on November 7, 2000.

“The overall state high school graduation rate in Arizona for 2011 was about 78 percent, depending on the source,” she explained. “The graduate rate for ELL students was 25 percent. That kind of disparity in graduation rates should be a concern because it causes social and economic inequalities.”

While at Stanford, Peña intends to do a longitudinal study of Proposition 203 in relation to Arizona’s high school graduation rate. She said as far as she knows, she is the only one in the doctoral program pursuing the study of ELL students.

“What I hope to do is to track Arizona students who have been through the educational process mandated by Proposition 203 over the past decade,” Peña explained. “I want to get some solid numbers on how this apparently is not working and why more attention should be brought to it.

“I also would like to produce research that makes people think critically about this situation. ‘English-only’ is easy to say and may attract voters, but the problem is that it essentializes a very complex issue.”

Peña said at the time Proposition 203 was passed, an academic team including former ASU English faculty members Jeff MacSwan and Kellie Rolstad reviewed the research summary put forth by initiative proponents. The academics stated that the summary neglected to reference significant research addressing questions raised about Proposition 203, particularly its SEI component. They added that the summary frequently drew inappropriate conclusions from research it presented.

“They sent out a research paper that highly advised against passage of Proposition 203,” Peña said. “It concluded that there is so much existing research saying this is a bad idea that the law should not be mandated. But I’m not sure the paper got the attention it deserved.”

For her doctoral research, Peña said she will track school district numbers in the Phoenix area to provide a representation of how the law is impacting the entire state. “I hope that I’m doing the research for a reason – to potentially inform voters,” she said.

Once she completes her four- to five-year program at Stanford, Peña will graduate with her doctorate in social sciences, humanities and interdisciplinary policy studies with a concentration in educational linguistics.

The School of Transborder Studies, the School of Human Evolution and Social Change and the School of International Letters and Cultures are academic units in ASU’s College of Liberal Arts and Sciences.