Egyptologists find evidence for back stabbing as ancient punishment

Being stabbed – or speared – in the back may have been a form of punishment in the Egyptian city of Amarna.

A recent study of five adult male skeletons from Amarna’s commoners’ cemetery shows sharp-force trauma to the shoulder blades, as well as other signs of trauma that may indicate lashings and beatings. 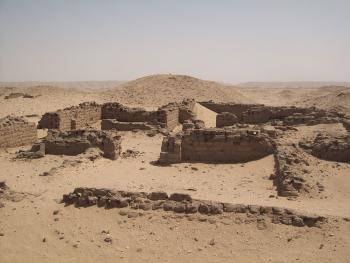 According to study leader Gretchen Dabbs of Southern Illinois University, these wounds sync with ancient texts that identify corporal or ritual punishment.

Baker agreed with Dabbs’ conclusions. The ancient Egyptians “didn’t have jails the way we do today, so public lashing of this sort was probably prescribed,” she explained.

Amarna was once Egypt's capital city, created by the "heretic king" Akhenaten. Based on skeletal analyses, the thousands of everyday people who constructed it faced many difficulties, such as hard labor and malnutrition, in addition to the threat or administration of harsh punishment, as suggested by Dabbs.

Her paper, co-authored by Melissa Zabecki of Parkin Archaeological State Park, appeared in the International Journal of Paleopathology, for which ASU Regents’ Professor Jane Buikstra is editor-in-chief.

Baker and Buikstra are faculty in the School of Human Evolution and Social Change in the College of Liberal Arts and Sciences.