When Erica Warkus took her first steps on an ASU campus, becoming a life sciences major was the last thing she thought she'd do. Little did she know that four years later she would find herself studying marine biodiversity and taking steps toward becoming a doctor.

As a student in Barrett, the Honors College, Warkus knows a thing or two about hard work. During the last few months of the Spring 2012 semester, she has spent countless hours in professor Sharon Hall’s desert ecosystem ecology lab working on her honors thesis. And after working so closely with Hall, Warkus has nothing but kinds words to describe her mentor, who, she says, “always pushed me to do better than I would have by myself.” 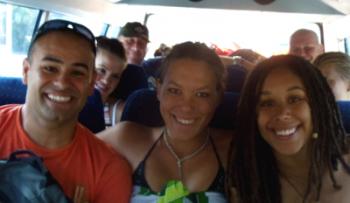 To enrich her academic experience, Warkus chose to study abroad in the mountains of Monetverde, Costa Rica, on a trip that focused on tropical ecology and conservation, which coincidentally happened to be the specialization of her major. During the trip, she was able to get a hands-on experience in the forest preserve and experience things she had only once read about in textbooks.

In 2010, however, the catastrophic earthquake that hit Haiti forever changed the lives of millions, including Warkus. After seeing the devastation on television and hearing personal accounts from her aunt who was the director of a nursing unit at a hospital set up by Project Medishare Haiti, Warkus knew she had to answer the call for help.

That November the senior volunteered her time helping those injured and in need. She saw everything from infections to broken bones – some which ultimately claimed lives, as the country did not have enough medical supplies needed to tend to the affected masses.

“That trip made me want to become a doctor,” says Warkus. “These people are 90 minutes away from the United States where they would all have been fine. I want to be able to travel to other places of the world where help is needed and volunteer. If you can help someone, why wouldn’t you?”

Upon returning home, Warkus continued her schooling and accepted the NSF Diversity Scholarship in the summer of 2011 to study marine biodiversity in Indonesia. For her, being out in the ocean and studying echinoderms was a dream come true.

“I think sea critters are awesome. The ocean is like an alien world – you don’t see anything like it every day,” she says.

Warkus plans to return to Indonesia on a Fulbright scholarship to continue the research she began in 2011. In the meantime she is enjoying the little time she has left as a student at ASU. This includes spending time with friends, studying for finals and celebrating the completion of her honors thesis.

“I really like school and being surrounded by people I know," she says. "ASU has done a lot for me, and I’m really grateful for where I am.”

To accomplish her dreams of becoming an anesthesiologist, Warkus is currently finishing up the prerequisites needed to attend medical school, and plans to take the MCAT in May. She wants to return to her home state and attend the University of Hawaii.

Grad's goal is to give gift of sight

Maisoon Chowdhury, who will graduate this May, says her ultimate goal is to run her own nonprofit optometry practice.

Grad's goal is to give gift of sight

"I’ve always been around poverty,” says ASU senior Maisoon Chowdhury. “My parents grew up in Bangladesh so my family travels back and forth a lot. It was a culture shock at first to see how people live their lives.”

Now a biochemistry major and a nonprofit administration minor, Chowdhury first came to ASU on an exploratory track with the help of a Parents Association Scholarship. After stints in global health and global studies majors, Chowdhury finally found her passion for optometry. 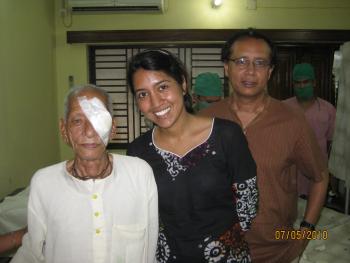 “I knew I wanted to do something in the sciences, but I don’t just want to “fix” someone. I want to give someone opportunities. If I can give a poor child eyesight, now they can become a school teacher or a doctor,” she says.

While at ASU, Chowdhury resurrected the pre-optometry club on campus that provides information and volunteer opportunities to other students interested in the field. She also is a peer mentor and a member of Devils Advocates, a group that gives campus tours to prospective students and their families all year round. Chowdhury also donates her time as a Health Devil, an organization that mentors pre-health students.

In the summer of 2010, she volunteered with the International Center for Diarrhoeal Disease Research in Bangladesh, a trip that found her working on a slum-based nutrition project. The group worked to educate pregnant women on the proper diet they should be consuming for the sake of their health as well their child. Chowdhury notes that this work is especially important in Bangledesh because the economic struggle means these women may not have the knowledge or resources to have a prior understanding of these concepts.

That summer she also donated her time working with a health and blind nonprofit care facility where her grandfather works. Through this organization, she had the opportunity to shadow an ophthalmologist and stand in on cataract surgeries, which she calls a “phenomenal experience.”

“We worked with a 16-year-old boy who didn’t have any eyesight, and that is not really normal for someone his age. After he had his cataracts removed he could see perfectly. He started crying and was so happy and appreciative,” Chowdhury says with a smile.

Chowdhury’s ultimate goal is to run her own nonprofit optometry practice. But before she accomplishes this dream, she knows that there are many life lessons and goals that she wants to achieve first. And that all starts when she walks the stage at Sun Devil Stadium and has her degree conferred.

Upon graduation in May, Chowdhury will be visiting Honduras with Global Medical Brigades for two weeks. The nonprofit organization will spend time educating the population on medical and public health issues. The team also will build a much needed eco-stove and a latrine.

In June she will take the United States Foreign Service Exam for the chance to work in the U.S. State Department, carrying out foreign policy abroad. For Chowdhury, the position would be a good opportunity to combine her love for international relations and making interpersonal relationships with those of diverse cultures and backgrounds.

"I love learning about people," she says. "You could meet someone off the street and by talking to them for a just a second, gain a new perspective on their life, your life and maybe even the world. For me it is all about human connections."

The College of Liberal Arts and Sciences Student Student