Veronica Clavijo Jordan, a native of Bolivia, moved to Arizona in 2002 and found every aspect of the state new to her, including “the language, the weather, and mostly the support Arizona State University provides to students with intentions to succeed and obtain higher education.”

With a passion for medicine and engineering, she has excelled in a rapidly growing and highly technical field. She graduates with a doctorate in Biomedical Engineering from ASU’s School of Biological and Health Systems Engineering, part of the Ira A. Fulton Schools of Engineering. 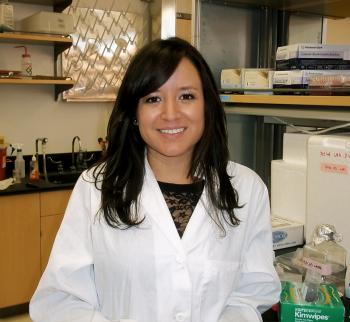 Her goal has been to improve diagnostic techniques for prevention and early detection of diseases such as cancer, with a focus on designing a highly efficient, versatile and biologically inert nanoparticle that can be used for many applications, including targeting and tracking living cells by MRI.

“The ability to observe molecular events in vivo and in three dimensions non-invasively has been answering fundamental biological questions that help gain a better understanding of the human body and disease,” she says.

The diversity of research at ASU provided a wealth of interdisciplinary collaborations. “My dissertation work would have not been possible had I not had the opportunity to be under the supervision of my advisor Kevin Bennett and to collaborate with all branches of science and engineering, including materials science, biology, electrical engineering and chemistry.”

The value of her research has been recognized locally, nationally and internationally. She received funding from Science Foundation of Arizona (SFAz) as a Graduate Research Fellow, the Arizona Biomedical Research Commission, the National Institutes of Health, and the American Heart Association.

With National Science Foundation (NSF) funding, she attended an International Summer School on Biocomplexity in Istanbul, Turkey and has been selected to speak at other international scientific conferences. The International Society for Magnetic Resonance in Medicine Conference and the World Molecular Imaging Congress, two highly competitive meetings, invited and funded her to speak in Canada and Ireland about her work.

With a bachelor’s degree in bioengineering from ASU, and now her doctoral degree, Clavijo Jordan says “graduation is a very special day for me; it means the end and reward of five and a half years of dedication, frustration, hard work and success.” She plans to continue at ASU as a postdoctoral fellow to complete pending projects.

Arizonans will embark on a unique political journey this month as they join retired U.S. Supreme Court Justice Sandra Day O’Connor for a weekly series of candid conversations with the state's most prominent politicians.

Phoenix-based O’Connor House is presenting an Arizona Centennial tribute featuring conversations between retired Supreme Court Justice Sandra Day O’Connor and noted Arizona political leaders. The television series will air starting Sunday, December 16, at noon on Eight, Arizona PBS. The conversations give viewers behind-the-scenes insights into Arizona’s political history, and at the same time, provide a rare glimpse of the wit and intellect that have made Justice O’Connor an American treasure. 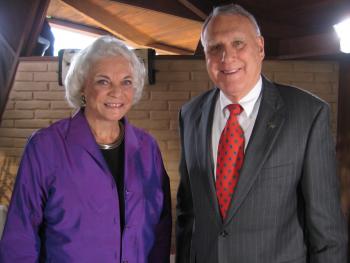 Other featured guests and topics on “Arizona Centennial Series with Justice Sandra Day O’Connor” include the following:

• Gov. Rose Mofford, Dec. 30: These two Arizona icons revisit Gov. Mofford’s nearly 50 years in government, including her rise to the highest office in the state; visits from Mother Teresa and Pope John Paul II during the governor’s tenure; and her role in Major League Baseball’s Arizona Cactus League.

• Secretary of Homeland Security Janet Napolitano, Jan. 6: Also a former Arizona Governor, Napolitano remembers what it was like to argue a case in front of the U.S. Supreme Court. In addition, Sec. Napolitano and the Justice talk about Miranda rights, immigration issues, civics education for children, Arizona’s “Fab Five,” and Arizona’s first congresswoman, Isabella Greenway.

• Former U.S. Sen. Dennis DeConcini and former U.S. Rep. John Shadegg, Jan. 13 and 20: Sen. DeConcini recalls serving in the U.S. Senate with Goldwater. Rep. Shadegg tells stories of the 1952 election that shifted Arizona’s political landscape from Democrat to Republican, with the help of archival footage of Goldwater and Udall.

• U.S. Sen.-elect Jeff Flake, Jan. 27: The justice tells stories from her upbringing on the Lazy B Ranch. Flake shares his family’s history dating back to Territorial Arizona, including settling the town of Snowflake. The Arizona senator-elect also talks about his family’s long-standing commitment to public office and civic participation.

The “Arizona Centennial Series with Justice Sandra Day O’Connor” will be available on DVD. The series was made possible by support from SRP.