Do men and women really look for different things in a romantic partner?

In the last few years, researchers examining “speed-dating” have been making a radical claim: although men and women say they want something different in romantic partners, the two sexes really want the same thing. But a new study demonstrates that the claim needs revisiting. Indeed, men and women really mean what they say – guys care a lot more about attractiveness and women care a lot more about social status.

Published in this month’s Journal of Personality and Social Psychology, the findings are the first to demonstrate experimentally that the sexes differ in the way they choose mates in real-life contexts.

The study’s findings contradict recently popularized speed-dating studies that have found that, while men and women show these differences when considering hypothetical ideal partners, their preferences do not match up with how they actually evaluate and choose speed-dating partners. Both sexes seem to place equally high value on physical attractiveness in their speed-dates.

A recent review of romantic relationship studies has found a similar lack of consistency between stated and actual preferences. Have sex differences in mate preferences been a giant fib? Do people truly lack awareness of what they desire in a partner? A closer examination reveals a far more fascinating picture.

Norman Li, associate professor of psychology at Singapore Management University, Oliver Sng, a doctoral psychology student at Arizona State University, and colleagues conducted various experiments using online chatting and speed-dating methods. Unlike past studies, these experiments were explicitly set up to include men and women with low social status and low physical attractiveness.

After chatting with opposite-sex individuals with both low and moderate levels of these traits, men, more than women, rejected and reported less attraction toward potential mates with low physical attractiveness. Women, more than men, indicated similar aversion toward those with low social status. Also, how people valued these traits when asked about their preferences on paper predicted their attraction toward actual chat partners encountered live.

According to Li, the study’s lead author, the research is also novel because the scientists are clarifying how exactly men and women differ.

“That is, they prioritize different qualities when screening each other in online chats and speed-dates – women want men who are at least average in social status while men want women who are at least moderately physically attractive,” Li said. “We also are the first to demonstrate that what individuals say they value in potential mates is indeed reflected in how they actually choose them in initial mating situations.”

According to Li, men and women differ mostly on the low-end qualities that they want to avoid, not the high-end traits that they ideally desire. However, unattractiveness in women and low social status in men may not be well-represented in speed-dating events and attraction studies run on university students and professionals; hence, a reason why other speed-dating studies have not found sex differences and why it might appear that people do not know what they want in their potential mates.

“Speed-dating events and other modern contexts have many factors that can prevent a person’s ideal preferences from being expressed,” said Sng. “This new study identifies one such factor (lack of low-end variability) and shows that once you correct for it, people do indeed make choices closer to what they ideally want.”

Kenrick said, “The new study helps to dispel politically correct – but factually misguided – notions of a gender-neutral world where men and women want the exact same kind of mates.”

Special effects artist Michael Trcic probably has bad dreams. After all, it was in his imagination that one of cinema's scariest monsters first came to life.

Trcic, a two-time Academy Award winner and key special effects artist for the 1993 Steven Spielberg film “Jurassic Park,” will discuss the process of creating the T. rex – from concept to life-sized, working model – at 6:15 p.m., Sept. 10, at the Marston Exploration Theater, in ISTB4 on the Arizona State University campus in Tempe. The event is sponsored by ASU’s Center for Film, Media and Popular Culture and Center for Science and the Imagination. 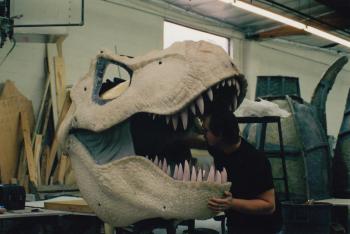 Trcic already had what could be considered a “royal pedigree” in filmmaking when he conceived of his paleo-monster for director Steven Spielberg. He had previously worked side-by-side with horror and sci-fi masters George Romero, Sam Raimi and James Cameron on their respective films: “Dawn of the Dead,” “Evil Dead 2” and “Terminator 2: Judgment Day.”

The blockbuster “Jurassic Park” was box office magic when it was released 20 years ago. Still one of the highest grossing films of all time, it won the Oscar for Best Visual Effects. It was re-released in 3-D earlier this year and leaves a mark on filmmaking history like a dinosaur-sized footprint in sand.

“’Jurassic Park’ played a pivotal role in the transition from traditional special effects to the current era of computer-generated visual effects that now dominate Hollywood blockbusters,” said Peter Lehman, professor of English and director of the ASU Center for Film, Media and Popular Culture. “[It] still resonates strongly with young students. I show the movie in my large Introduction to Film class and nearly every student has already seen it every year, although now many were not even born when it was originally released.”

"When it comes to science in the movies, few films have such a visceral hold on the public imagination as ‘Jurassic Park,’" said Ed Finn, director of ASU’s Center for Science and the Imagination and an assistant professor in the School of Arts, Media and Engineering and the Department of English. "As we enter the dawn of the 'de-extinction' era, making these genetic technologies a reality, it's important to take a close look at how we imagine ourselves as creators of new life."

Today, Trcic quietly works from his home in Sedona, Ariz. A paleo-artist who also produces western sculpture, Trcic has been commissioned to recreate dinosaurs by the Discovery Channel, IMAX, The University of Chicago, The National Geographic Society and Disney. Closer to home, his life-sized bronze dinosaur sculpture (Dilophosaurus, from Arizona’s early Jurassic), welcomes visitors to the Arizona Museum of Natural History in Mesa.

For more information about the event, please contact Cat Hartmann, 480-727-9866 or catherine.hartmann@asu.edu.

The Department of English and the Center for Film, Media and Popular Culture are academic or research units in ASU’s College of Liberal Arts and Sciences.