Using molecules of DNA like an architectural scaffold, Arizona State University scientists, in collaboration with colleagues at the University of Michigan, have developed a 3-D artificial enzyme cascade that mimics an important biochemical pathway that could prove important for future biomedical and energy applications. 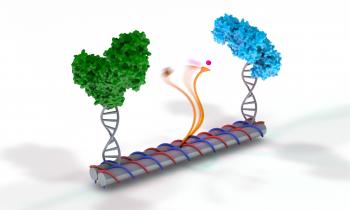 Researchers in the field of DNA nanotechnology, taking advantage of the binding properties of the chemical building blocks of DNA, twist and self-assemble DNA into ever-more imaginative 2- and 3-dimensional structures for medical, electronic and energy applications.

In the latest breakthrough, the research team took up the challenge of mimicking enzymes outside the friendly confines of the cell. These enzymes speed up chemical reactions, used in our bodies for the digestion of food into sugars and energy during human metabolism, for example.

"We look to Nature for inspiration to build man-made molecular systems that mimic the sophisticated nanoscale machineries developed in living biological systems, and we rationally design molecular nanoscaffolds to achieve biomimicry at the molecular level," Yan said, who holds the Milton Glick Chair in the ASU Department of Chemistry and Biochemistry and directs the Center for Molecular Design and Biomimicry at the Biodesign Institute.

With enzymes, all moving parts must be tightly controlled and coordinated, otherwise the reaction will not work. The moving parts, which include molecules such as substrates and cofactors, all fit into a complex enzyme pocket just like a baseball into a glove. Once all the chemical parts have found their place in the pocket, the energetics that control the reaction become favorable, and swiftly make chemistry happen. Each enzyme releases its product, like a baton handed off in a relay race, to another enzyme to carry out the next step in a biochemical pathway in the human body.

For the new study, the researchers chose a pair of universal enzymes, glucose-6 phosphate dehydrogenase (G6pDH) and malate dehydrogenase (MDH), that are important for biosynthesis – making the amino acids, fats and nucleic acids essential for all life. For example, defects found in the pathway cause anemia in humans. "Dehydrogenase enzymes are particularly important since they supply most of the energy of a cell," said Walter. "Work with these enzymes could lead to future applications in green energy production, such as fuel cells using biomaterials for fuel."

In the pathway, G6pDH uses the glucose sugar substrate and a cofactor called NAD to strip hydrogen atoms from glucose and transfer to the next enzyme, MDH, to go on and make malic acid and generate NADH in the process, which is used as a key cofactor for biosynthesis.

Remaking this enzyme pair in the test tube and having it work outside the cell is a big challenge for DNA nanotechnology.

To meet the challenge, they first made a DNA scaffold that looks like several paper towel rolls glued together. Using a computer program, they were able to customize the chemical building blocks of the DNA sequence so that the scaffold would self-assemble. Next, the two enzymes were attached to the ends of the DNA tubes.

In the middle of the DNA scaffold, they affixed a single strand of DNA, with the NAD+ tethered to the end like a ball and string. Yan refers to this as a swinging arm, which is long, flexible and dexterous enough to rock back and forth between the enzymes.

Once the system was made in a test tube by heating up and cooling the DNA, which leads to self-assembly, the enzyme parts were added in. They confirmed the structure using a high-powered microscope, called an AFM, which can see down to the nanoscale, 1,000 times smaller than the width of a human hair.

Like architects, the scientists first built a full-scale model so they could test and measure the spatial geometry and structures, including in their setup a tiny fluorescent dye attached to the swinging arm. If the reaction takes place, they can measure a red beacon signal that the dye gives off – but in this case, unlike a traffic signal, a red light means the reaction works.

Next, they tried the enzyme system and found that it worked just the same as a cellular enzyme cascade. They also measured the effect when varying the distance between the swinging arm and the enzymes. They found there was a sweet spot, at 7 nanometers, where the arm angle was parallel to the enzyme pair.

With a single swinging arm in the test tube system working just like the cellular enzymes, they decided to add arms, testing the limits of the system with up to four added arms. They were able to show that as each arm was added, the G6pDH could keep up to make even more product, while the MDH had maxed out after only two swinging arms. "Lining enzymes up along a designed assembly line like Henry Ford did for auto parts is particularly satisfying for someone living near the motor city Detroit," said Walter.

The work also opens a bright future where biochemical pathways can be replicated outside the cell to develop biomedical applications such as detection methods for diagnostic platforms.

"An even loftier and more valuable goal is to engineer highly programmed cascading enzyme pathways on DNA nanostructure platforms with control of input and output sequences. Achieving this goal would not only allow researchers to mimic the elegant enzyme cascades found in nature and attempt to understand their underlying mechanisms of action, but would facilitate the construction of artificial cascades that do not exist in nature," said Yan.

The research is supported by a Multi-disciplinary University Research Initiative (MURI) grant from Army Research Office, with the goal of translating biochemical pathways into non-cellular environments.

ASU Insight: Breaking the Gridlock How to steer through stalemates and get government working again (8 minutes)

ASU Insight: Breaking the Gridlock How to steer through stalemates and get government working again (8 minutes)

Join us for two solutions oriented discussions on how to make the Federal government work for America again. 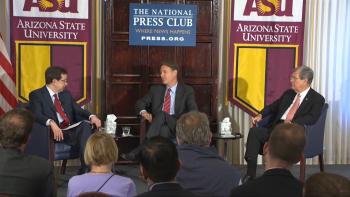 Panel discussion on how to steer through stalemates and get government working again. Download Full Image

Featured panelists will include:

Ben Nelson is the founder, chairman and chief executive officer of Minerva Project and former head of Snapfish. Founded in 2012, the Minerva Project has attracted $95M in venture capital and seeks to reinvent higher education by building a new kind of liberal-arts university that is a unique blend between residential and online, is built on a technology platform that utilizes the latest in learning science, and is more affordable and accessible to students from around the world.