In different corners of the world, the members of the Arizona State diving team showcased their elite talent by qualifying for the top international diving competitions this weekend.

Senior Harrison Jones, who had qualified for the 2013 FINA World Championships on the 1-meter springboard on Friday, also qualified to compete on the platform and possibly the 3-meter. Head coach Mark Bradshaw was also named a coach for Team USA at the World Championship games. 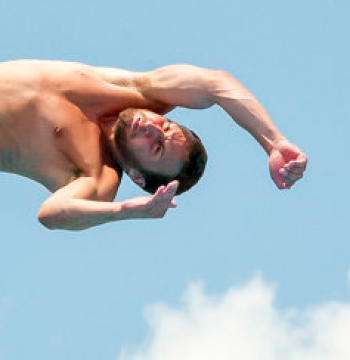 “It’s exciting for me as a coach, because I competed in three World Championships [as a competitive diver],” said head coach Mark Bradshaw. “Other than the Olympic games, this is the highest level of competition you can reach, especially for Harry in particular, who has never made it to [World Championships] before.

Jones was the only diver in the USA Diving Trials, in Tallahassee, Fla., to dive in all three disciplines: 1-meter, 3-meter and platform. Jones finished third in the 3-meter could potentially fill a vacant spot for the United States in the event because only Olympic bronze medalist Kristian Ipsen met the total point requirement to qualify at the time of the trials. While Jones’ three-round score on the 3-meter was not high enough, his final round score of 508.80 was the top score of the day.

“Harry just nailed every dive,” said Bradshaw. “It was a dive I had seen earlier in the season when he was on a roll. He actually beat Ipsen again and scored over 500 points, which is a rarity and doesn’t happen often.“

Bradshaw was selected to the coaching staff for Team USA for the World Championships in Barcelona, Spain, Bradshaw’s first Team USA coaching appointment after competing for the organization in the late 80's including the 1988 Seoul Korea Olympics.

“Coco was a post-eligibility guy who just graduated,” said Bradshaw. “He continued to train for the goal in mind and it was really rewarding to see him accomplish it. This was really his last opportunity.”

“It was really such a special week with Coco qualifying and Harry competing the way he did. It was really just a tremendous week for myself and my athletes.”

Benjamin batted .526 (10-for-19) with seven RBI, three doubles, a home run and three runs scored in four games this past week. HIs .842 slugging percentage and .526 on-base percentage played a large part in helping the Devils rack up 27 runs against Texas Tech and Arizona. This is Benjamin's first career Pac-12 Player of the Week honor and Arizona State's Conference-leading 104th all-time selection. He is the fifth Sun Devil to earn honors this season and the third position player.

He also went 2-for-5 with three RBI, including a solo home run, and scored a run in a 6-3 win over the Wildcats on Saturday. His three hits on Sunday against Arizona extended his hitting streak to nine games and he has recorded at least one RBI in seven of his past nine games after knocking in a pair on Sunday.

He currently leads the team in batting average, slugging percentage, runs scored and total bases and could be the first Devil since Jason Kipnis in 2009 to lead the team in all four of those categories.

The Sun Devils close out their regular season home slate with a midweek conference matchup against BYU on Tuesday at 6:30 p.m. ASU then travels to Washington to finish the 2013 regular season with a three-game Pac-12 set Friday-Sunday. First pitch on Friday is at 5 p.m., while Saturday's begins at 4 p.m. and Sunday at 12 p.m.

Season Ticket Renewal:
Season ticket holders can renew and/or pre order postseason tickets by calling their service representative at 480.965.5333 or visiting the Sun Devil Ticket Office at Sun Devil Stadium. The deadline to retain your seats and receive the best possible price is Saturday, June 22. Meeting the renewal deadline will also ensure you receive priority when selecting seats at the new Phoenix Municipal Stadium in 2015.