She’s an enchanting nanny. He’s a sprightly chimney sweep. Together, they bring London to life from the rowdy rooftops and vibrant city parks of an otherwise unfriendly, industry-laden metropolis unfit for children – except for those, however, who will be watching from the balcony and grand tier of ASU Gammage Auditorium.

“Popping in” for three weeks of performances in February, the award-winning Broadway musical “Mary Poppins” will be teaching a new generation of audiences about the medical necessities of sugar (just a spoonful) as well as the remarkable versatility of a single word that has long silenced spelling bee champs and chatty folks alike.

Of 1964 Julie Andrews fame, “Mary Poppins” became a Disney classic faster than you can say “Chim Chim Cher-ee” and about 30 years after the first book in the beloved children’s series by P. L. Travers was published. Travers’ story chronicles the Banks family who live in early 20th-century London and are helped by Mary Poppins – their often vain, sometimes unkind, but always magical nanny who was blown in by a strong eastern wind with her umbrella and carpetbag in tow.

Travers had reservations about a Disney adaptation of her story and thus demanded and was granted final script approval for the film that also starred Dick Van Dyke. Since 2004, Broadway has partnered with Disney to breathe new life into “Mary Poppins” and keep with the spirit of the books and film that preceded its musical incarnation – one that has captivated audiences worldwide since 2004.

Performing in the role of “Bert” is actor Gavin Lee who has played Mary’s loyal chimney sweep friend for the last five years, beginning with the London production and then moving to New York.

“It took a long time for this fabulous role to show up,” said Lee, who started dancing at age nine and entered the theater business in 1990. He originally auditioned for Bert’s understudy, but ended up winning the role outright.

“The part is so brilliant for an actor,” Lee said. “You get to show off all aspects of your abilities: dancing, singing and acting. It’s the best role I ever played.”

Coming off a lengthy stay in Los Angeles, Lee was pleased to report for the first time – after being asked by hundreds of reporters – that he finally had the opportunity to meet Dick Van Dyke, Disney’s original “Bert.”

“Disney was kind and organized for us to have lunch together,” said Lee, who accompanied the legendary 84-year-old actor, comedian, producer and writer on a studio tour of where the 1964 movie was filmed. Van Dyke also made a cameo in a recent Los Angeles performance of “Mary Poppins” as one of the old London bankers.

“It was really amazing, and it was great to be on stage with him,” Lee said.

An actor might fret over the expectations an audience is apt to bring to an adaptation of a film that is as iconic as “Mary Poppins” – but Lee couldn’t be more confident about how beautifully the story has translated to the stage.

“It is so many people’s favorite movie of all time,” Lee said. “In some cases, it is the first movie they ever went to. You are not going to see a carbon copy of the movie, but the audience hasn’t got to worry – all the favorite songs and all the best bits are still there.”

According to Lee, the show’s creators even found a way for “Jolly Holiday” to go Technicolor on stage – a theatrical nod to the film’s famously animated scene.

“So many of the numbers go in a slightly new direction. I bet most people probably do not even think about the movie until they are on their way home,” Lee said.

Whether you are a fan of the film, the books, the music or theater in general, it is the story and setting of “Mary Poppins” that most likely will resonate with Valley residents. The 1910 depressed financial climate, though set in London, hits strikingly close to home – as do the corrupt “fat cat” bankers who even go as far as to threaten to take little Michael and Jane Banks’ two pence in the film version. And certainly any parent can relate to the limited time afforded to simply be with their children – if only to go fly a kite.

This show promises a “Jolly Holiday” of fun and magic – an escape from reality where Mary “makes the sun shine bright.”
To see Tony Award nominee Gavin Lee perform opposite Caroline Sheen, who will be returning to the show in Tempe after having originated the title role of Mary Poppins in the London production, visit the ASU">http://asugammage.com/shows">ASU Gammage box office to purchase tickets for performances scheduled Feb. 11 through Feb. 28.

Sheen will be joined by six other new principal actors.

“A whole new crowd is coming in,” Lee said. “It will be like a brand new show and make for a great opening night. Tempe is lucky.”

Lucky is one way of putting it. “Supercalifragilisticexpialidocious” is another.

ASU Regents’ Professor Carlos Castillo-Chavez, a mathematical epidemiologist, is once again receiving national recognition for his contribution to mathematics.

ASU Regents’ Professor Carlos Castillo-Chavez, a mathematical epidemiologist, is once again receiving national recognition for his contribution to the mathematics profession. This month, Castillo-Chavez received the award for distinguished public service from the American">http://www.ams.org/">American Mathematical Society.


The award citation reads: “Castillo-Chavez has had a major impact with his efforts and activities in improving the representation in the broad mathematical sciences of the nation’s traditionally underrepresented and economically disadvantaged students. He continues his activities in research and education at a very high level and is a most worthy recipient.” 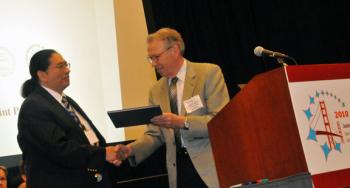 
The award, established in 1990, is usually given every two years to a research mathematician who has made a distinguished contribution to the mathematics profession during the preceding five years. It was presented earlier this month during the Joint Mathematics Meetings in San Francisco.


Previously, Castillo-Chavez received the 2007 Mentor Award from the American Association for the Advancement of Science. He received the AAAS award, in part, for his leadership role in the mentoring of Hispanic American students in graduate and undergraduate programs.


Castillo-Chavez came to ASU from Cornell University in 2004 and brought with him the well-known Mathematical">http://mtbi.asu.edu/">Mathematical and Theoretical Biology Institute (MTBI), a summer program he established. Its goal is to increase the number of doctorates from underrepresented U.S. populations in fields where mathematical, computational and modeling skills play a critical role.


“I am profoundly moved by the AMS decision to recognize my epsilon contributions to the mathematical sciences and some of it communities," Castillo-Chavez said. "The importance that the AMS places on public service, as demonstrated by the establishment of this award, resonates even more in this time of crisis."


“The importance of providing opportunities and multiple successful pathways to all U.S. aspiring mathematicians must be continuously carried out, not only to preserve the intellectual capacity that we have, but also to broaden and enrich the mathematical community through the systematic inclusion in the wonderful and empowering world of mathematics of Americans who have been traditionally underrepresented,” he said.


"The programs put in place by Professor Castillo-Chavez have a direct and positive impact on students," said Elizabeth D. Capaldi, ASU’s executive vice president and provost. "His excellence in research and his commitment to underrepresented students is making a difference at ASU and in the mathematics profession. We are proud of his latest achievement.”


In addition to his title of Regents’ Professor, Castillo-Chavez is the Joaquin Bustoz Jr. Professor of Mathematical Biology in ASU’s College">http://clas.asu.edu">College of Liberal Arts and Sciences, where he teaches in the School">http://shesc.asu.edu/">School of Human Evolution and Social Change and the School">http://math.asu.edu/">School of Mathematical and Statistical Sciences.


Castillo-Chavez also is director of ASU’s Mathematical">http://mcmsc.asu.edu/home">Mathematical, Computational and Modeling Sciences Center, which, the citation noted, “strives to create a dynamic community of quantitative scientists and mathematicians driven to contribute to the solution of problems in the biological, environmental, and social sciences.”


"Professor Castillo-Chavez has an international reputation for his computational modeling as well as his mentoring of students, preparing them for careers in mathematics,” said Sid Bacon, dean of natural sciences in ASU’s College of Liberal Arts and Sciences. “It is fitting for him to win this award from the world’s largest society devoted to mathematical research."