Gary Dirks, director of Arizona State University’s LightWorks Initiative and former president of BP China and BP Pacific-Asia, has been appointed director of ASU’s Global Institute of Sustainability (GIOS), with the goal of expanding the global impact of ASU.

“GIOS’s charter is to advance research, education, business practices and global partnerships that aid in the transformation of today’s world into a more sustainable endeavor,” said ASU President Michael Crow. “With the appointment of Gary Dirks as director of GIOS, we look to increase the global impact of our work and surge ahead as a leader in sustainability.” 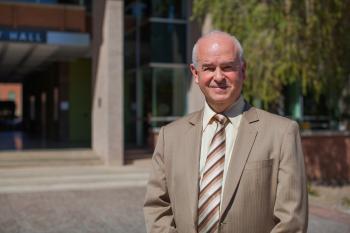 "Gary possesses exactly the combination of skills, experience and intellectual curiosity to lead the Institute,” said Julie Ann Wrigley, co-chair of the GIOS Board of Directors. “As a former global business executive, member of the GIOS Board of Directors and leader of ASU LightWorks Initiative, a better leader could not have been chosen at this point in the development of the Institute.”

“Gary has demonstrated his ability to set a grand vision, align projects and people around that vision to create solutions to grand challenges that impact our society,” said Sethuraman “Panch” Panchanathan, senior vice president for ASU’s Office of Knowledge Enterprise Development. “He does all of this in a rapid time frame that is consistent with the spirit of the New American University.”

As director, Gary will chair the GIOS 3-person Directorate. The Directorate oversees the Insititute’s complex, pan-university mission and consists of the director, an executive dean and the dean of the School of Sustainability.

Dirks received his doctorate in chemistry from ASU in 1980, and after working in the energy industry, returned to ASU to lead the LightWorks in 2009. The LightWorks Initiative is ASU’s multidisciplinary research effort to harness the energy of sunlight and apply it across a broad spectrum of technology related challenges. Dirks will continue to lead the initiative as part of his new role at GIOS.

In 2003 Dirks received China’s “Friendship Award,” the highest recognition granted to foreign citizens, and was appointed Companion of the Order of St. Michael and St. George from the UK in 2005. In December 2008, he was recognized by the People’s Daily as one of the 10 most influential multinational company leaders of the last 30 years of China’s economic development.

“GIOS is an extraordinary place with people who understand sustainability at a very deep level and who know how to apply sustainability concepts to solve real-world problems,” said Dirks. “The challenge for me will be building on a very strong foundation to extend the reach and impact of the Institute.”

U.S. Supreme Court Justice Sandra Day O’Connor (ret.) spoke at a March 7 event at the College of Law for the launch of her new book, "Out of Order: Stories from the History of the Supreme Court."

The topics ranged from Chico, the little wild horse, and U.S. Supreme Court justices with (too) big personalities, to judicial merit selection and suggestions that the nation’s highest court hear cases outside the hallowed walls of its D.C. courtroom now and again.

U.S. Supreme Court Justice Sandra Day O’Connor (ret.) chatted about this and more during a March 7 event at the College of Law for the launch of her new book, "Out of Order: Stories from the History of the Supreme Court." A capacity crowd of 400 people hung on the Justice’s every word as she reminisced with Arizona Supreme Court Chief Justice Ruth V. McGregor (ret.) about her days on the court and the history of the institution. 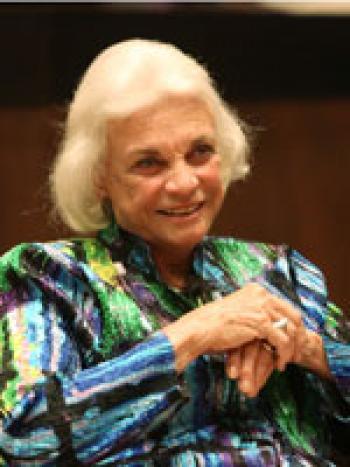 “I wanted to use the information I most enjoyed learning about, and develop some of those stories of the Supreme Court justices of the past,” Justice O’Connor said of her decision to write the book. “It’s been a long story – 200 years – and there was a lot to tell. And I haven’t told it all.”

Following the discussion and a question-and-answer session, the Justice signed copies of her book. Visitors stood in line for up to 45 minutes at her namesake law school for the chance to say hello and obtain her signature.

Justice O’Connor, the first woman appointed to the U.S. Supreme Court, wrote in her book a chapter about other “firsts.” They include the first chief justice (John Jay), the first woman law clerk (Lucile Lomen), the first African-American justice (Thurgood Marshall), and the first law clerk who later became a justice (Byron White – he also was the first justice to ever lead the NFL in rushing in a rookie season).

Other chapters deal with the court’s first decade, its eventual move to One First Street in 1935 (up until then the court had been a virtual nomad, moving from New York to Philadelphia to D.C.), and the “riding circuit,” in which the justices were assigned to hear cases in various parts of the country.“The justices were required to visit the different courthouses in the circuit and hear whatever business came before them,” Justice O’Connor said. “There were no good trains, no good motels or hotels, it’s just a amazing what the early justices went through. They stayed in local flophouses and shared beds with strangers and ate suspect food!

“We had a very different country in those days.”

One of her favorite chapters, “Larger-than-life justices,” tells about James McReynolds, whose abysmal reputation, she wrote, stems from his mean and bigoted character, and Oliver Wendell Holmes Jr., whom many consider to be among the greatest jurists in history.

Turning to her own life since retiring from the court in 2006 to spend more time with her ill husband, who has since passed away, Justice O’Connor said she travels the country as part of the federal appeals court system to hear various cases. And, recalling how she grew up taking civics courses each year in school, the Justice beamed about iCivics.org, an online education project she founded to help students learn about government by playing specially designed computer games.

“Today, more than half the states no longer teach civics or make it a requirement,” she said. “I don’t think we can have that. I think it’s totally unacceptable because you can’t get it from the air you breathe. You have to learn how our government works and how you are part of it.”

In response to a question from the audience, Justice O’Connor said her favorite pet growing up was her little wild horse, Chico. Being raised on a ranch prepared her for accepting responsibility and working hard, she said.

The Justice also put in a plug for merit selection of judges, in which a nonpartisan commission recommends qualified candidates to the governor for appointment to the bench. The judges then are retained (or not) by the voters.

“When I first became a judge (Arizona Court of Appeals), judges didn’t have merit selection,” she said. “I had to run as a candidate, and lawyers contributed to my campaign. Is that the way you want your judges selected? That doesn’t make sense, and no other nation does that.”