"Devine … is that your real last name?" 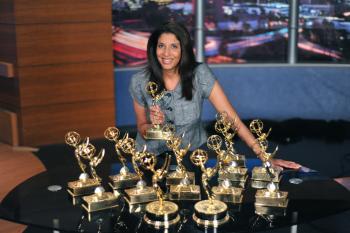 It's a question ASU alumna Christine Devine has been asked with regularity throughout her career. People often assume it's a celebrity moniker, fashioned for her Los Angeles TV news anchor job.

"In reality, it's my adopted last name. I was born Christine Yara Lucas," says Devine, who anchors the 10 p.m. newscast at KTTV Fox 11 in Los Angeles and has written a new book, "Finding a Forever Family: A News Anchor's Notebook on Adoption within the Foster Care System" (with Allison Bottke, editor).

In the memoir, Devine chronicles her experiences with the foster care system and tells the backstory to her weekly news segment, Wednesday's Child – a program that has found permanent homes for more than 400 "hard-to-place" foster children in the Los Angeles metropolitan area. Now in its 17th year, Wednesday's Child is a signature program for the Fox 11 news station and has earned her a 15th Emmy award – the Los Angeles Area Governors Award –  presented in Los Angeles, Aug. 6, by the Academy of Television Arts & Sciences.

"Wednesday's Child is a known name in this large and diverse city, and for many of our viewers a warm moment in the sea of negative news," says Devine, in the introduction of her book. "I'm always thrilled when people see me on the streets, point their finger and say knowingly, 'Wednesday's Child. I love Wednesday's Child!'"

Although Devine, admittedly, is a big fan of her show, she says that it wasn't always a bright spot in her life. The segment was assigned to her when a reporter from another news channel retired and Devine's news station picked it up. It was an assignment she took on professionally, but wished to keep it at that.

"I loved my boss … and did not want to disappoint," Devine says.

While she was assigned to advocate for the permanent placement of foster children one night a week on television, Devine said she was struggling with doubts of whether adoption really worked. Her own firsthand experience as a sibling to a foster child read more like a tale of chaos, heartbreak and burden.

"So when asked to take on adoption segment, you might imagine my inner expression. You're kidding me, right?"

What she soon learned was that she had a natural ability to connect with the children she was profiling. As a child born to a single mother and then legally adopted at age three when her mother married Jack Devine – the man she calls "dad" – Devine said she often wondered about her birth father as a young child.

"I wondered, too, why I didn't look like anyone else in my anglo family," said Devine, referring to her Brazilian curly hair and brown skin. "Not knowing a birth parent was something with which I felt a kinship with many of the children on Wednesday's Child."

Through her interviews with foster children and families who welcomed them into their homes, Devine began to see the foster care system through a different lens. She was able to witness the power of relationships – the security, community and care that they provide – and their capacity to transform lives. With a shift in perspective, Devine became driven by a personal goal: to find homes for children who were considered to be the hardest to place, such as children with severe special needs, older children and siblings.

"The children we profile are at-risk children, desperate for love, yet caught up in a system doing its best with a crisis that can be cruel and unforgiving," says Devine, whose book details her path to becoming a well-known adoption advocate, working with such organizations as the Freddie Mac Foundation (sponsor of Wednesday's Child) and the Los Angeles' Department of Children and Family Services.

According to 2009 foster care statistics from the U.S. Department of Health and Human Services, Children's Bureau, there are close to half a million children in foster care. Children in foster care live in and may move between a variety of home settings, such as non-relative foster homes, relative foster homes, group homes, institutions, pre-adoptive homes and trial homes visits. The preferred goal for the majority of foster children is permanency with caring parents.

While mostly memoir, Devine's book contains information about the adoption process, advice from foster parents, accounts from foster children and information about adoption resources. Her work in addressing adoption has been honored by the U.S. Congress and Child Welfare League of America and noted by U.S. business leaders, decision-makers and Hollywood entertainers. She has received several prestigious philanthropy awards and is the winner of the American Women in Radio and Television's Gracie Allen Award.

A 1987 ASU graduate of the Walter Cronkite School of Journalism and Mass Communication, Devine was inducted into the Cronkite Hall of Fame in 2001. She also received the Founders' Day Alumni Achievement Award in 2002 for her many service contributions both in and outside ASU and the Cronkite School, in particular. She currently serves on the Alumni Association's National Alumni Council.

The weeknight newscast anchor on Fox 11 and Channel 13, Devine joined Fox in 1990. She has won 14 Emmy Awards and has been voted, along with her co-anchors, “Best Anchor Team” by the Associated Press.

People with a bachelor's degree and a desire to enter the teaching profession can learn about ASU programs leading to a master's degree and teacher certification during one of several upcoming information sessions.

Individuals with a bachelor’s degree in any field and a desire to enter the teaching profession can learn about Arizona State University programs leading to a master’s degree and Arizona teacher certification during one of several upcoming information sessions. The sessions are offered online as well as in person at the university’s Tempe, Polytechnic and West campuses.

ASU’s Mary Lou Fulton Teachers College offers its Master’s and Arizona Certification (MAC) programs in early childhood education, elementary education, secondary education, special education and physical education. Programs are offered at ASU’s Polytechnic, Tempe and West campuses and on-site in local school districts. Partners for on-site programs in metropolitan Phoenix include the Osborn and Deer Valley districts, with the Sunnyside district in the Tucson area to be added in the summer of 2012. 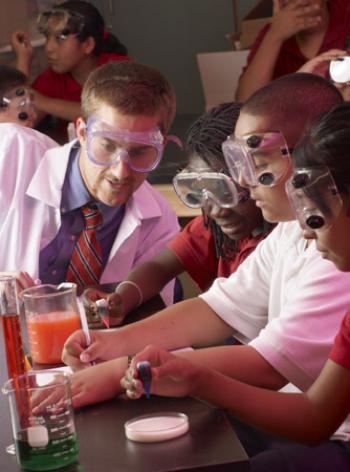 “Our programs have a great reputation for producing high-quality teachers who have successfully completed rigorous coursework, field experiences and student teaching,” said Barbara Giles, assistant dean in Teachers College. “We maintain strong partnerships with school districts and work closely to ensure the preparation our students receive is consistent with the skills and qualities districts are looking for when hiring teachers.”

All requirements for on-campus MAC programs, including teacher certification and a master of education degree, may be completed in 18 months. Coursework meeting Arizona’s Structured English Immersion (SEI) requirement is built into all programs. On-site programs in partner school districts are four semesters in length, including summer coursework and field experience internships.

Additional programs will admit their next cohort of students in the summer or fall of 2012.

Upcoming information sessions cover admission requirements, program options, and information about the Arizona teacher certification process. The sessions, which provide details about all programs at all locations, include:

Information sessions are approximately 90 minutes in length. Participants may register online at http://education.asu.edu/content/graduate-information-sessions.