Central Arizona has a rich history of agriculture, contributing $9.2 billion toward the state’s economy. That water has near-absolute power in determining the region’s fate is not an over-reaching assumption. With increasing urban development and an uncertain climate, is this industry doomed or can it be sustained?

Researchers at Arizona State University have been studying the issue, talking to farmers about how to keep their industry on a sustainable path. They argue that a mutually inclusive and ongoing conversation among the agricultural community, urban residents, water agencies and policymakers is necessary if the region would like to maintain an agrarian footprint in the future. 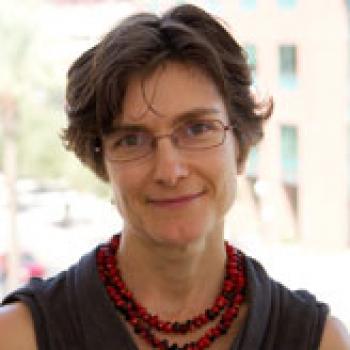 The research, supported by the National Oceanic and Atmospheric Administration and the National Science Foundation, is one of few that have examined the vulnerability of irrigated agriculture to uncertain climate and unrelenting urban development, according to lead researchers Hallie Eakin, associate professor in ASU’s School of Sustainability, and Abigail York, associate professor in the School of Human Evolution and Social Change.

Population growth in central Arizona has forced researchers, water resource managers and policymakers to turn their critical eye to the distribution of the region’s finite water supply. More often than not, the spotlight is focused on water used by agriculture.

Many may not know it, but Arizona ranks among the top producers nationally for a variety of crops, including cotton, alfalfa, hay, lettuce and citrus. According to a 2010 report released by Arizona Department of Water Resources, agriculture in Maricopa and Pinal counties accounts for 47 and 96 percent of water usage within the counties, respectively, while the agricultural output in Maricopa County is second in the state, followed by Pinal in third place.

The researchers say that policies instituted by the Groundwater Management Act in 1980 have been successful in reducing pressure on groundwater resources by shifting farmers on to Colorado River water through the Central Arizona Project (CAP).

“Central Arizona farmers have traditionally been shielded from variable and extreme climatic events – a condition that will be harder to sustain in light of recent climate studies that show that surface water sources, including rivers, lakes and streams, are less reliable than previously assumed,” York said.

The scientists found that most farmers in the region are educated, motivated, entrepreneurial producers who are eager to learn more about water conservation and irrigation improvement programs to ensure that agriculture remains an integral part of the state’s future. Yet, they feel they lack a voice.

“Farmers say their needs are not valued as much as those dealing with urban demands,” Eakin said. “Key players need to be asked pointed questions regarding what is desired and why, and the pros and cons of retaining an agrarian footprint in the region.”

York said that conflicts along the edge of cities are likely due to a lack of understanding of agricultural activities. Better outreach and education of urban residents about the nature of agriculture could help resolve the issues.

“The agricultural community also believes that federal environmental policy and agencies are in direct opposition to its best interests and future,” York said. “Hence, it is critical to identify opportunities to communicate farmers’ concerns to policymakers and agencies, and vice versa, for a peaceful coexistence.”

Eakin calls the assumption that agriculture will and should give way to urban development, “premature.”

“States all over the Southwest are facing a similar situation,” she said. “A bigger picture that takes into consideration the benefits of agriculture, including food security, revenue, jobs and heat island mitigation, would help to inform the decision-making process that will ultimately lead to central Arizona’s sustainable future.”

Stuart Lindsay and his colleagues at ASU's Biodesign Institute have demonstrated the accurate identification of amino acids.

Some three billion base pairs make up the human genome – the floorplan of life. In 2003, the Human Genome Project announced the successful decryption of this code, a tour de force that continues to supply a stream of insights relevant to human health and disease.

Nevertheless, the primary actors in virtually all life processes are the proteins coded for by DNA sequences known as genes. For a broad spectrum of diseases, proteins can yield far more compelling revelations than may be gleaned from DNA alone if researchers can manage to unlock the amino acid sequences from which they are composed.

Now, Stuart Lindsay and his colleagues at Arizona State University’s Biodesign Institute have taken a major step in this direction, demonstrating the accurate identification of amino acids by briefly pinning each in a narrow junction between a pair of flanking electrodes and measuring a characteristic chain of current spikes passing through successive amino acid molecules.

By using a machine-learning algorithm, Lindsay and his team were able to train a computer to recognize bursts of electrical activity representing the momentary binding of an amino acid within the junction. The noise signals were shown to act as reliable fingerprints, identifying amino acids, including subtly modified variants.

Proteins are already providing a wealth of information pertinent to diseases, including cancer, diabetes and neurological disorders like Alzheimer’s, as well as furnishing key insights into another protein-mediated process: aging.

The group’s research results are reported in the advanced online edition of the journal Nature Nanotech.

From genome to proteome

An enormous library of proteins, known as the proteome, occupies center stage in virtually all life processes. Proteins are vital for cellular growth, differentiation and repair; they catalyze chemical reactions and provide defense against disease, among myriad housekeeping functions.

One of the strangest surprises to emerge from the Human Genome Project is the fact that only about 1.5 percent of the genome codes for proteins. The rest of the DNA nucleotides form regulatory sequences, non-coding RNA genes, introns and noncoding DNA (once derisively labeled “junk DNA”). This leaves humans with a scant 20-25,000 genes, a sobering discovery given that the lowly roundworm has roughly the same number. As professor Lindsay notes, the news gets worse: “A lily plant has about an order of magnitude more genes than we do,” he says.

The mystery of complex organisms like humans bearing an appallingly low gene number has to do with the fact that proteins generated from the DNA blueprint can be modified in a number of ways. In fact, scientists have already identified over 100,000 human proteins, and researchers like Lindsay believe this may be only the tip of the iceberg.

Just as sentences can have their meanings altered through changes in word order or punctuation, proteins generated from gene templates can change function (or sometimes be rendered inoperable), often with serious consequences for human health. Two key processes that modify proteins are known as alternative splicing and post-translational modification. They are the drivers of the extraordinary protein variation observed.

Alternative splicing occurs when coding regions of RNA (known as exons) are spliced together, and non-coding regions (known as introns) are snipped out prior to translation into proteins. This process does not always occur neatly, with occasional overlaps of exons or introns being introduced, producing alternatively spliced proteins, whose function may be altered.

Post-translational modifications are markers added after proteins have been made. There are many forms of post-translational modification, including methylation and phosphorylation. Some altered proteins perform vital functions, while others may be aberrant and associated with disease (or disease propensity). A number of cancers are associated with such protein errors, which are already used as diagnostic markers. Proper identification of such proteins, however, remains a grand challenge in biomedicine.

The technique described in the current research was earlier applied in the Lindsay lab for the successful sequencing of DNA bases. This method, known as recognition tunneling, involves threading a peptide through a tiny eyelet known as a nanopore. A pair of metal electrodes, separated by a gap of roughly two nanometers, sits on either side of the nanopore as successive units of a peptide are threaded through the tiny aperture, with each unit completing an electrical circuit and emitting a burst of current spikes.

The research group demonstrated that close analyses of these current spikes could enable researchers to determine which of the four nucleotide bases – adenine, thymine, cytosine or guanine – was poised between the electrodes in the nanopore.

“About two years ago in one of our lab meetings, it was suggested that maybe the same technology would work for amino acids,” Lindsay says. Thus began efforts to tackle the substantially greater challenge of using recognition tunneling to identify all 20 amino acids found in proteins, as opposed to just four bases comprising DNA.

Single-molecule sequencing of proteins is of enormous value, offering the potential to detect diminishingly small quantities of proteins that may have been tweaked by alternative splicing or post-translational modification. Often, these are the very proteins of interest from the standpoint of recognizing disease states, though current technologies are inadequate to detect them.

As Lindsay notes, there is no equivalent in the protein world to polymerase chain reaction (PCR) technology, which allows minute quantities of DNA in a sample to be rapidly amplified. “We probably don’t even know about most of the proteins that would be important in diagnostics. It’s just a black hole to us because the concentrations are too low for current analytical techniques,” he says, adding that the ability of recognition tunneling to pinpoint abnormalities on a single molecule basis “could be a complete game changer in proteomics.”

The new paper describes a series of experiments in which pure samples of individual amino acids, individual molecules in mixed solution and short peptide chains were successfully identified through recognition tunneling. The work sets the stage for a method to sequence individual protein molecules rapidly and cheaply (see accompanying animation).

A machine-learning algorithm known as Support Vector Machine was used to train a computer to analyze the burst signals produced when amino acids formed bonds in the tunnel junction and emitted a lively noise signal as the poised electrodes passed, tunneling current through each molecule. (The machine-learning algorithm is the same one used by the IBM computer "Watson" to defeat a human opponent in Jeopardy.)

Lindsay says that around 50 distinct signal burst characteristics were used in the amino acid identifications but that most of the discriminatory power is achieved with 10 or fewer signal traits.

Remarkably, recognition tunneling not only pinpointed amino acids with high reliability from single complex burst signals, but managed to distinguish a post-translationally modified protein (sarcosine) from its unmodified precursor (glycine), and also to discriminate between mirror-image molecules known as enantiomers, and so-called isobaric molecules, which differ in peptide sequence but exhibit identical masses.

Lindsay indicates that the new studies, which rely on innovative strategies for handling single molecules coupled with startling advances in computing power, open up horizons that were inconceivable only a short time ago. It is becoming clear that the tools that made the $1,000 genome feasible are equally applicable to an eventual $1,000 proteome. Indeed, such a landmark may not be far off. “Why not?” Lindsay asks. “People think it’s crazy, but the technical tools are there, and what will work for DNA sequencing will work for protein sequencing.”

While the tunneling measurements have until now been made using a complex laboratory instrument known as a scanning tunneling microscope (STM), Lindsay and his colleagues are currently working on a solid state device capable of fast, cost-effective and clinically applicable recognition tunneling of amino acids and other analytes. Eventual application of such solid-state devices in massively parallel systems should make clinical proteomics a practical reality.

Stuart Lindsay is the director of Biodesign’s Center for Single-Molecule Biophysics, the Edward and Nadine Carson Presidential Chair in Physics at ASU and Regents Professor in the College of Liberal Arts and Sciences, Chemistry and Biochemistry.