Looking at Ryan Stewart it appears that he is just like your average college student in many ways – focused, intelligent and kind. However, when speaking with him it becomes clear that this Sun Devil has more courage and determination than many combined. In fact, it is only with these qualities that Stewart has managed to overcome many obstacles that life has placed before him to earn a college degree.

Stewart – a Phoenix native – grew up enjoying the perks of adolescence. After high school he decided to enroll at Arizona State University, where his passion for knowledge was furthered. However, things took a turn for the worse during his senior year of college. 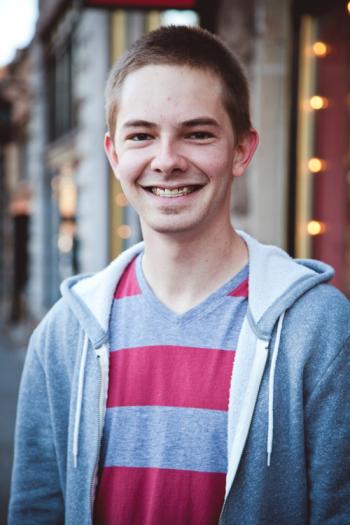 Stewart says that he was having trouble at home and developed a sense of fear about his wellbeing. He was having difficulties sleeping and eating. He says he started to lose sight of reality altogether.

Around 8:15 p.m. on Sept. 18, Stewart started driving home from ASU after working late. He could feel his mind wandering and fear taking over. Moments later his car swerved off the road and hit a lamp pole, causing his vehicle to tip on its side. Luckily, Stewart didn’t sustain any major injuries but was transported to the hospital for safety. He says that looking at his totaled car, he can only credit a higher power for stepping in to protect him that night.

After being released from the hospital, Stewart spent time in a psychiatric care facility to regain balance and control of his wellbeing, all the while anxious to get back to his studies and complete his undergraduate degree in mechanical engineering from the Ira A. Fulton Schools of Engineering. It was during this time that he was officially diagnosed with bi-polar disorder, a condition his mother also shares.

“The first thing I wanted to do was catch up on school. I would study all day and was in constant communication with my professors and teaching assistants,” he said.

Unfortunately, his four-course workload was unmanageable with the struggles that he was having at home. Stewart made the difficult decision to drop two classes and postpone his graduation for a semester.

“I almost wish that I had stayed in those courses and graduated, but I know it was the right decision and only delayed me a couple of months,” he said.

To fund his tuition, Stewart put off purchasing a new car and even sold his baby grand piano. He became fiercely determined to meet the academic goals he set for himself. This included putting a social life on hold to dedicate all of his time to studying.

The hard work will pay off on May 9 when he has his degree conferred at the undergraduate commencement ceremony.

“I’m thrilled to see him end this chapter in his life. I’m grateful that we found people who were willing to help us through this process,” said his mother Amanda Stewart. “I just want him to live a normal, happy life.”

Aside from his studies, Stewart has regained the ability to drive and is working on rebuilding trust and communication with his family regarding his mental health.

“I’m learning to better communicate how I’m feeling day to day. My medicine makes me a little groggy so I have to reevaluate if it’s safe to drive or if I need to be picked up,” he said.

While the journey to this point had many discouraging moments, Stewart always persevered with the help of his family. Amanda says that she hopes Stewart’s story will show people that mental health issues can be managed and cause them to reevaluate preconceived notions.

“There is help and treatment available. Having mental challenges does not make you crazy. Hopefully, people will see that the stereotype needs some tweaking,” she said.

The soon-to-be graduate is looking forward to entering the workforce, where he dreams to one-day work on the design and creation of cars from a manufacturing standpoint. He would also like to work for Boeing.

Thinking over the last two years, Stewart says, “It’s not a pretty story.”

Maybe not, but it has a wonderful ending.

The 2013 Meet the Convention and Visitors Bureaus Conference, hosted by ASU's School of Community Resources and Development, provided a venue for discussion regarding recent market successes and prospects for the future in the local tourism industry.

More than 40 revenue managers from 25 Valley hotels and resorts gathered on April 16 for the 2013 Meet the Convention and Visitors Bureaus (CVBs) Conference, hosted by the Phoenix Area Revenue Managers (PARM) at the Courtyard Scottsdale North.

The conference was hosted by Arizona State University’s School of Community Resources and Development to provide a venue for discussion regarding recent market successes and prospects for future in the local tourism industry from the perspective of local CVBs. 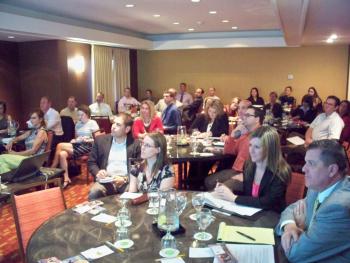 Coordinated by Timothy Tyrrell, a professor of community resources and development with the College of Public Programs, the PARM group was established in 2010 to promote the development of revenue management professionalism in the Valley.

“Every time we meet, I find myself walking away with new insight on how the Phoenix market is performing,” said Isaac Rodriguez, vice president of revenue management with Twenty-Four Seven Hotels.

Throughout the conference, senior leaders from local convention and visitors bureaus led discussions on a range of topics including:

• Lorain Pino, manager with Glendale Convention and Visitors Bureau, who presented information regarding the University of Phoenix Stadium, Jobing.com Arena, and future events coming soon to the west Valley such as Lego KidFest and Wrestlemania XXVI.

• Rachel Pearson, vice president of community & government affairs with Scottsdale Convention & Visitors Bureau, who shared results from some of this year’s biggest events, such as the Waste Management Phoenix Open and the Barrett-Jackson car auction, presented as part of Auto Week.

• Linda Ruby, director of sales with the Tempe Tourism Office, who discussed the size and growth of major East Valley sporting events including the USA Triathlon (Collegiate) and Pat’s Run, which annually attracts nearly 35,000 participants and spectators.

The PARM group charges no dues or fees and relies entirely on the growing enthusiasm of area professionals.

Tyrrell, an economist by training joined ASU in 2005 and has studied and taught tourism economics for more than 30 years.

“While I’m retiring from the university in June, I plan to continue my involvement with the PARM organization,” Tyrrell said.