The American West has a drinking problem. On farms and in cities, we are guzzling water at an alarming rate.

Scientists say that to live sustainably, we should use no more than 40 percent of the water from the Colorado River Basin. As it is now, we use 76 percent, nearly double the sustainable benchmark. 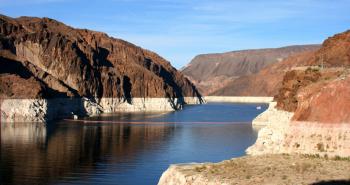 The water supports the populations of California, Arizona, Nevada, Utah, New Mexico, Colorado and Wyoming, providing for agriculture and cities. With a changing climate and continued population growth, increasing demand for water may make this vital resource increasingly scarce.

There are some safeguards in place against water scarcity. The reservoir Lakes Mead and Powell can provide approximately five years of average annual stream flow at full capacity for insurance against low rainfall years.

But John Sabo, an associate professor in Arizona State University’s School of Life Sciences, believes that 50 years in the future – rather than five – should be the planning mark for water usage.

“My take on that is we’re already beyond the point where we have enough insurance against the bad years, which is why a year and a half ago we started talking about water rationing before it started raining in December,” says Sabo, who is also director of research development in ASU’s Global Institute of Sustainability.

After dipping to a record low in 2011, Lake Mead presently sits at below half capacity, and that’s with favorable rainfall and snowpack accumulating in the Rocky Mountains, which feed the Colorado.

Also, to our detriment, there is a culture dedicated to creating an oasis in the Southwest’s arid environment. Most of the West’s water falls in the mountains, where it slowly melts, We collect it and then spread it thin across the deserts. Moving water from wet areas to dry areas makes people feel safe, according to Sabo.

“We have lawns, palm trees and lush green parks because we store water from far away to offset the arid reality of the desert,” he says.

Regardless of how much our lawns guzzle, the largest use of water isn’t in urban areas but in agriculture. Farming uses 77 percent of the water allocated for human use in Arizona, according to the Morrison Institute for Public Policy’s publication “Watering the Sun Corridor.”

For example, Southwestern farms produce approximately 75,000 acres of lettuce annually. As much as 55,000 acres of that is grown in Arizona, according to University of Arizona publications. Of Arizona’s lettuce, 95 percent is grown in the southwestern corner, in Yuma county, which receives an average rainfall of about 3.6 inches.

“People might ask, why are we growing lettuce in Arizona?” questions Sabo. “Well, it’s because it’s warm here in the winter and people want salads in the winter. And if you want a salad in the winter and you don’t want to wait for natural salad season to come around, you’ve got a tradeoff, and that tradeoff is the water footprint.”

The water footprint of produce isn’t often taken into consideration, however.

“There’s this ‘eat local’ movement that has done a great job to educate people about how your decisions at the supermarket relate to your carbon footprint and climate change,” says Sabo. “But there’s nothing like that for water, and I think there needs to be.”

Since most water isn’t used for cities, urban lifestyle changes aren’t going to do much to solve the problem. Shorter showers and eco-friendly appliances aren’t enough to make a significant impact on our massive water use.

Sabo proposes that the Southwest cuts its water use to 60 percent. To get there, it comes down to policy and investment in infrastructure for the future.

David White, co-director of ASU’s Decision Center for a Desert City (DCDC), says that Arizona water policy has done a good job of providing adequate supplies for the growth of the region up to this point. But environmental and demographic factors will likely require changes in that system. The DCDC uses research to inform environmental policy in times of uncertainty.

“We’ve been able to deliver a consistent and reliable amount of water to residents even though the amount of water that comes into our system fluctuates wildly,” says White. “That system has been effective over the past 100 years under a set of conditions and assumptions that may be changing due to climate change, extended and prolonged droughts, and increased demand as a result of population growth. It faces new challenges,” adds White.

Home to more than half of Arizona’s population, Maricopa County grew by 24 percent from 2000 to 2010, according to U.S. Census Bureau data. Additionally, “Watering the Sun Corridor,” projects the 2030 population of Phoenix and Tucson to exceed 7.8 million.

One way to reduce water use is through the addition of more sustainable infrastructure. According to Sabo, this would be most effective in areas of growth and expansion, such as Ahwatukee, Anthem and Sunrise.

“Retrofitting historical Phoenix would be a pain in the neck,” says Sabo. “The idea is to build sustainable infrastructure as we build out. Reclaimed water is cheaper to add in to unbuilt suburbs than to retrofit in older cities. When the time comes for refurbishing the old potable infrastructure in the central city, then we can consider retrofitting for dual distribution of potable water for drinking and reclaimed water for landscape irrigation at home.”

Such changes would help us follow White’s recommendation to stop siphoning our limited groundwater sources and live off of renewable surface water instead. Groundwater is water that is stored in underground aquifers. Although it is replenished by rainfall, we use it much faster than it can be replaced.

“Groundwater supplies a bank or a backup of water,” says White. “But by and large it’s a nonrenewable source and we should try to live within our means.”

It’s unlikely that the Southwest would run out of water. But as temperatures rise and population swells, how we value our water supply is going to change.

Ward-Duong, a first-year doctoral student in ASU’s School of Earth and Space Exploration, will receive a three-year annual stipend providing the full costs of salary, tuition and fees, and travel for international research and professional development programs. 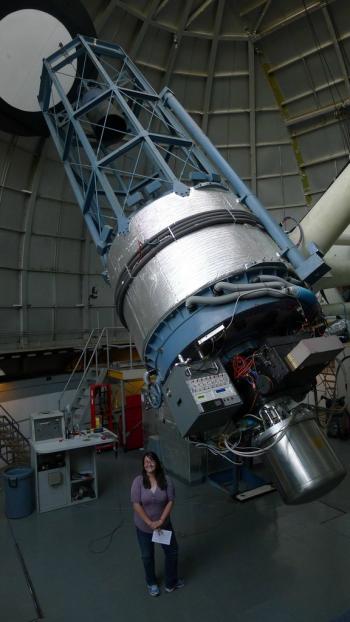 Ward-Duong joined SESE after completing undergraduate degrees in physics, astronomy, and mathematics at Northern Arizona University. Her previous research involved observations of transiting exoplanets and the search for both planetary companions and moons in those systems. She was a NASA Space Grant intern for one year. The summer after her junior year, she was an intern at the Harvard-Smithsonian Center for Astrophysics in Cambridge, MA, as part of the NSF Research Experiences for Undergraduates program. During her internship, she worked on Chandra X-ray Observatory observations of elliptical galaxies.

Upon arriving at ASU last Fall, she began a research project with Associate Professor Sangeeta Malhotra designed to search for infrared signatures of dust grains within massive clusters of galaxies, using data from the NASA WISE (Wide-field Infrared Survey Explorer) satellite. Malhotra provided mentorship and advice as Ward-Duong worked on her NSF fellowship application. Currently, Ward-Duong is working on two projects, ranging from the nearest stars to distant galaxies. With her advisor, Associate Professor Jenny Patience, Ward-Duong is using state-of-the-art adaptive optics imaging to search for substellar companions to nearby low-mass stars to investigate how stars and planets form. Through an NSF educational grant led by Assistant Professor Evan Scannapieco, Ward-Duong is also pursuing a research project with the newly-constructed Low Frequency Array (LOFAR) to study magnetism on galactic and cosmic scales; she will travel to Europe this summer to work with scientists calibrating this new observatory.

“As a student and researcher, Kimberly stands out with her keen interest in forefront observing techniques and their astronomical applications. She is very talented mathematically and has a strong knowledge of observational astronomy across a range of wavelengths. She has the determination and the independence to be successful in her PhD research work, and I look forward to working with her over the next several years. I can see this award helping her to achieve her dream of becoming a research faculty member or staff scientist at an astronomy research institution,” says Patience.

“More than anything, this award will really allow me to focus and devote my time to research here at ASU,” says Ward-Duong. “It also gives me a great deal of freedom to choose which areas of astronomy I want to pursue, and it will open up future collaborations and research opportunities during my PhD program.”

As the oldest graduate fellowship of its kind, the fellowship has a long history of selecting recipients who achieve high levels of success in their future academic and professional careers. Since 1952, NSF has funded over 46,500 Graduate Research Fellowships out of more than 500,000 applicants. More than 30 of them have gone to become Nobel laureates, and more than 440 have become members of the National Academy of Sciences. Past fellows include numerous Nobel Prize winners, U.S. Secretary of Energy Steven Chu, Google founder Sergey Brin, and “Freakonomics” co-author Steven Levitt.