Deer Valley Rock Art Center is much more than a museum

Kim Arth never knows who will be waiting to greet her when she arrives at work. Perhaps it will be Mabel the snake, with her babies. Or one of the resident Great Horned Owls, who fly so silently you don’t even know they are there. Or maybe a tarantula.


Obviously, Arth doesn’t work at a high-rise office building in the center of town, or even a building on one of ASU’s four campuses. 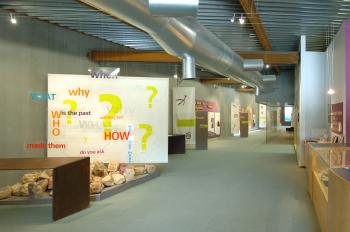 
She’s director of ASU’s Deer Valley Rock Art Center – which, it could be argued, is ASU’s fifth campus location.


Located just two miles west of the I-17 freeway, nestled into the foot of the Hedgpeth Hills, the Rock Art Center is home to more than 1,500 Native American petroglyphs made between 800 and 5,000 years ago.


As the Rock Art Center celebrates its 15th anniversary, Arth took a few moments to reflect on the center’s past, present and future.


Archaeologists have long had their eye on the Hedgpeth Hills site. When an extensive flood control project was planned for the area in the 1970s, in the wake of severe flooding, all interested parties came together to talk about the fate of the petroglyphs.


According to a history of the DVRAC, the Advisory Council on Historic Preservation, the U.S. Army Corps of Engineers, the Arizona State Historic Preservation Office, the Flood Control District of Maricopa County and other governmental agencies signed an agreement to limit the dam’s impact on the site in 1976.


Four years later, the U.S. Army Corps of Engineers sponsored archaeological fieldwork (carried out by the Museum of Northern Arizona) to record the petroglyphs and to develop a plan for protecting the site.


The archaeologists’ report recommended the development of a small museum and controlled access to the site, and fortunately the Corps agreed, recognizing the project as an opportunity to promote archaeological research and education in one location.


Phoenix architect Will Bruder was hired to design the building, and in 1984, ASU’s School of Human and Evolution and Social Change was selected to operate and maintain the facility. Maricopa County’s Flood Control District remains the legal owner of the property.


Today, the DVRAC is much more than a rock art site or museum.


The Rock Art Center embodies ASU President Michael Crow’s mandate that the university be “embedded in the community,” she added.


“We give tours to school kids – 4,000 students a year come here. We hope they will come back with their children.


“We’ve just added an education staff member who is devoted to adult and kids’ programming. Boy Scouts and Girl Scouts can earn their archaeology badges here, and we offer architecture tours too.”


Recently, DVRAC started renting its facility for wedding and corporate meetings. “We’re working with the Peoria Sports Complex and the Phoenix Coyotes and the two hotels close to us," Arth said. “We send our guests to them, and they can come here for meetings.”


Arth, who served in the Peace Corps in Niger and earned her master’s degree in anthropology with an emphasis in museum education at ASU, has been working to expand both local and international connections.


She directs an enthusiastic group of volunteers, now numbering nearly 60, who guide tours, lead the center’s storytime for children, help with lectures, summer camps and exhibits, trim trees and assist with mailings and write grant proposals.


“Some are artists, novelists or carpenters. They find projects that lend themselves to their interests and talents. I’m amazed daily at people’s hidden talents. They give so freely of their time, making this institution what it is. We have wonderful, loyal volunteers.”


The DVRAC also has formed partnerships with other museums and organizations, and with Native American tribes.


The Hualapai Tribe, for example, puts on a traditional agave roast each spring at DVRAC, and will be featured at the 2011 statewide Archaeology Expo, which DVRAC will host.


The center is also home to the American Rock Art Research Association’s library and archives, and its holdings include some of the artifacts recovered during the excavations that preceded the construction of the Adobe, New River and Cave Creek dams.


Because of the American Rock Art Research Association’s presence, there is a lot of communication with other rock art research programs internationally, Arth said.


“We exchange ideas. There is rock art in Portugal, for example. Rock art is a universal finding. It’s all over the world, with very similar symbols. There’s a similarity in the human symbols and spirals, that peck in the rocks, whatever it was.”


For Arth, the job of directing the Rock Art Center was a perfect match. “I didn’t want to teach in a classroom,” she said. “I wanted to create knowledge in different ways.”

SkySong helps e-learning company grow up and out

A partnership between e-learning company Adaptive Curriculum and ASU SkySong has allowed the company to accelerate growth, as it prepares to move into 14,000 square feet of commercial space.

SkySong helps e-learning company grow up and out

In a vivid example of how the SkySong, the ASU Scottsdale Innovation Center, can help companies grow and thrive, Adaptive Curriculum has transformed from a small “incubator” company to a thriving business that will now lease more than 14,000 square feet of commercial space in the project.

An award-winning developer of math and science e-learning solutions for middle schools and high schools, Adaptive Curriculum also recently hired Jim Bowler as its new chief executive officer to help the company manage this dramatic expansion. It will occupy the third-largest office space at SkySong and plans to triple the number of employees in its new offices over the next two years.

It’s an impressive success story for a company that came to ASU SkySong just three years ago with two employees occupying a couple of cubicles on the second floor of Building I. That particular space is reserved for start-up firms looking to accelerate their growth through the resources and connections ASU SkySong provides to the university.

Adaptive Curriculum's chairman and founder Ahmet Eti credits this synergy and knowledge gained from ASU SkySong as a critical component in its progress over the past few years.

“What began as a simple discussion between Ahmet and me has now grown into a truly remarkable success story for Adaptive Curriculum, Sebit, ASU and SkySong,” Crow said. “This is exactly how we envisioned the SkySong concept working as an economic development engine that supports and encourages innovation and entrepreneurship on a global scale.”

Sharon Harper, president and chief executive officer of Plaza Companies, one of the co-developers of the project, also pointed to Adaptive Curriculum as proof of the viability of the SkySong concept.

“When we started working on SkySong we had a vision where companies from around the world would come to the project and use its spirit of innovation and technology to grow their businesses,” Harper said. “Adaptive Curriculum might be the best example we’ve had to date of a company coming to SkySong, taking full advantage of its resources and maturing to the point where it will now boost the area’s economy and create jobs.”

Higgins Development Partners and Plaza Companies are co-developers of the project in partnership with the ASU Foundation and USAA Real Estate Company.

The addition of Bowler as Adaptive Curriculum’s new chief executive officer brings more than 25 years of education and technology experience to the company. He will oversee the growth of the company as well as the design and transition into the new space. Prior to joining Adaptive Curriculum, Bowler held chief executive officer positions at Epsilen, a global learning system company, and at Harcourt Connected Learning, an online professional development company.

“We envision our new space in SkySong to include a showcase classroom for educators to learn and develop their teaching skills and Jim’s experience both in the industry and as school administrator will greatly benefit our vision,” Eti said. “SkySong has been a great partner and we look forward to expanding our relationship.”

Bowler will be in charge of leading the company into the next stage of its development and growth as it expands its work force and presence in the United States.

“The core company belief that every student can learn math and science is what attracted me to Adaptive Curriculum,” Bowler said. “This unique facility at SkySong will showcase our commitment to meeting the needs of digital age learners who want and need high quality interactive math and science content.”