“Government has no place in reducing economic inequality” is the thesis that will be addressed during a town hall debate on Tuesday, Oct. 2 at 6 p.m. The event will be held in the La Sala Ballroom at ASU’s West campus, 4701 W. Thunderbird Road in Phoenix. It is free and open to the public; visitor parking on campus costs $2 per hour.

Arguing in favor of the thesis are Dean Martin and William Boyes. Martin is a business owner, Arizona’s former state treasurer and a former state legislator. Martin predicted the “great recession” and earned more than $1 billion in profits from investments for taxpayers despite the abysmal economy. Boyes is an emeritus professor of economics in ASU’s W. P. Carey School of Business who has authored numerous publications and received multiple awards, including the CASE Outstanding ASU Professor, the John Teets Outstanding Graduate Teacher and the Huizingh Distinguished Undergraduate Professor. He also served as consultant to a number of institutions including the Commerce Department for the White House, the Federal Trade Commission and Arizona Corporation Commission.

Dana Naimark and Lane Kenworthy will argue in favor of government’s role in reducing economic inequality. In her role as president and CEO of Children’s Action Alliance, Naimark conducts analysis, works to raise awareness, and lobbies the Arizona legislature on a wide variety of policy issues affecting parents and children. Kenworthy is a professor of sociology and political science at the University of Arizona who has written extensively on the causes and consequences of issues including living standards, poverty, mobility, employment, social policy, taxes and politics.

The event is part of the ThinK (Tuesdays here in the Kiva) series presented by ASU’s New College of Interdisciplinary Arts and Sciences, the core college on the West campus. The Oct. 2 debate is sponsored by New College’s School of Social and Behavioral Sciences.

“The School of Social and Behavioral Sciences is committed to engagement of civil discourse and conversation intended to enhance understanding of critical issues,” said Amit Ron, a political scientist and assistant professor. “As the election approaches, we are pleased to offer the public the chance to hear a thoughtful debate about the proper role of government in our society.”

For more information about this and other ThinK events during the fall semester, visit http://newcollege.asu.edu/think or contact Heidi Maxwell at (602) 543-4521 or heidi.maxwell@asu.edu.

Research that has helped propel the evolution of computer technology has earned a lifetime achievement award for an ASU engineering professor.

Shah is a professor in the School for Matter, Transport and Energy Engineering, one of ASU’s Ira A. Fulton Schools of Engineering. He has been teaching in the mechanical engineering program and conducting research at the university for more than two decades. 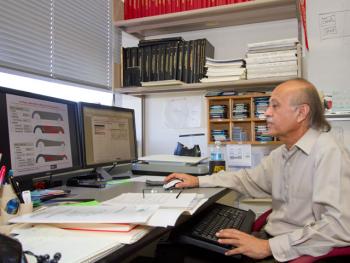 The award was bestowed by ASME’s Computers and Information in Engineering Division for Shah’s achievements in “furthering the discipline of computers and information engineering.”

His work has helped propel the evolution of computers from functioning merely as “primitive number crunchers and equation solvers” to technology that aids the human creative process, he explains.

Shah has focused on enhancing the capabilities of computer-aided design (CAD) and computer-aided manufacturing (CAM). Through that effort he has become a leader in the emerging fields of machine informatics and cognitive informatics.

Machine informatics explores how to improve the performance of technologies through advances in the construction and operation of machinery and related tools.

Cognitive informatics looks at “how computers can work as your partner” in creativity, Shah says.

“It is about the human thought process,” he says. “We look at how people approach problem-solving, what difficulties they encounter in the process, why they have those difficulties, and how people work their way out of them.”

His research has been on the cutting edge of advances that have enabled CAD to progress beyond providing the basic geometry for design to performing increasingly more complex design conceptualization functions.

With the broad abilities of today’s CAD systems, “many people won’t even remember that once there was a big gap between what engineers and other designers wanted to do and what computer tools were capable of doing,” Shah says. “We had to develop technology to close that gap.”

His work to fill that need has attracted support over the years from the National Science Foundation and Defense Advanced Research Projects Agency, which commissions advanced research for the U.S. Department of Defense.

He also has earned industry support from major corporations such as General Electric, Texas Instruments and Boeing.

Many of his Shah’s students have followed in his footsteps in their careers by implementing technological enhancements into commercial CAD systems.

Shah has authored two books on subjects in his area of expertise, has had more than 220 research papers published and is a partner in development of two inventions that have been granted U.S. patents. He is also the founding chief editor of the ASME Journal of Computing and Information Science in Engineering.

Under Shah’s leadership, the journal became a “flagship” publication for leaders in computing science and computing technology, says colleague Xiaoping Qian, an associate professor in the department of Mechanical, Materials and Aerospace Engineering at the Illinois Institute of Technology.

With his letter nominating Shah for the honor, Qian included testimonials from other colleagues in both academia and industry to confirm Shah’s stature as a pioneer in his field throughout the past 25 years.

Beyond research and technology development, Shah has made a strong impact as an educator. Qian notes in his nomination of Shah for the ASME award the large number of Shah’s former students “who hold key positions in various leading CAD companies today.”

Shah joins select company among winners of the ASME Lifetime Achievement Award in computer and information engineering. All of the previous recipients have been members of the National Academy of Engineers, one of the highest professional honors bestowed on engineers.

“Professor Shah’s work is held in high regard,” says Kyle Squires, director of ASU’s School for Matter, Transport and Energy Engineering. “We’re pleased to the see the ASME recognize the impact of his achievements with such a prestigious honor.”