New findings from NASA’s Dawn spacecraft lay the groundwork for the first geological overview of asteroid (4)Vesta and confirm the existence of not one but two giant impact basins in its southern hemisphere. The findings, published in a set of Science papers, will help scientists better understand the early solar system and processes that occurred as it formed and evolved.

The Dawn spacecraft, orbiting asteroid Vesta since July 2011, has already acquired several thousand images of the asteroid’s surface, revealing a complex landscape. The images provide many details that help scientists to understand how the surface has evolved since its formation. 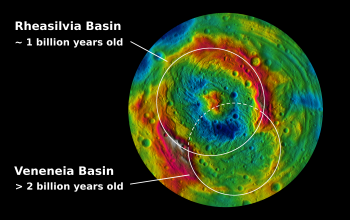 The first paper provides an overview of the true complexity of this ancient world. Vesta is not just a ball of rock; its surface is dominated by abundant impact craters of all shapes and sizes, from small fresh craters to giant basins as seen in the southern hemisphere. The surface of Vesta is complex and varied, with preserved ejecta blankets clinging to some craters, large troughs extending around the equatorial region, enormous mountains, and unevenly distributed enigmatic dark material, but as yet an absence of volcanic features.

“As a volcanologist, and as one who expected to find evidence of volcanism on Vesta based on what we knew from the Howardite–Eucrite–Diogenite (HED) meteorites and prior models of Vesta’s formation, the biggest surprise for me was the absence of any evidence of volcanic features. Vesta’s surface has been so heavily modified by impact cratering that any evidence of its early volcanic activity has been destroyed,” says Dawn mission participating scientist David Williams, co-author on the papers and faculty research associate in Arizona State University’s School of Earth and Space Exploration.

The present lack of volcanic features detected on Vesta suggests that volcanism was only active during the short period of rapid cooling of Vesta’s interior within the first 100 million years after formation, and that the surface has been eroded by impacts over time.

Like Earth and other terrestrial planets, Vesta has ancient basaltic materials in its crust and a large iron core. It is an irregular asteroid that also has tectonic features, troughs, ridges, cliffs, hills and a giant mountain. But comparisons of the slopes and topography of Vesta show that they are intermediate between planets and small asteroids, underscoring Vesta’s unique role as a transitional solar system body.

Prior to the arrival of the Dawn spacecraft, some Vestan surface features had already been resolved using the Hubble Space Telescope and ground-based telescopes. The most prominent of these surface features is an enormous crater Dawn found to be about 500 kilometers (310 miles) in diameter, centered near the south pole, named Rheasilvia after the mother of Romulus and Remus. Its width is 90 percent the diameter of Vesta and it is estimated that the impact responsible excavated about 1 percent of the volume of Vesta.

The second paper is a geological description of this large impact basin.

“Dawn observations enabled us to recognize that there are actually TWO large basins at the south pole, an older one named “Veneneia” and a younger one named “Rheasilvia”,” explains Williams.

The Rheasilvia basin dominates the geology of Vesta, as the basin itself and its impact ejecta cover most of the southern hemisphere. The center of Rheasilvia has a central peak taller than Mt. Everest or Mauna Loa on Earth, similar in height to Olympus Mons on Mars. This basin appears to have excavated into the mantle of Vesta, exposing material spectrally similar to diogenite meteorites; Vesta’s crust is spectrally similar to eucrite and howardite meteorites, thus confirming that Vesta and its family of asteroids are the source of the howardite-eucrite-diogenite (HED) family of basaltic achondrite meteorites.

“For most planets and moons we see the pictures first, then have samples collected later to confirm our geologic interpretations. In the case of Vesta, thanks to the HED meteorites, we have the samples first, and must try to relate them to our emerging geologic picture of Vesta from the Dawn mission,” said Williams.

A group of ASU students and graduates are organizing summer camps designed to inspire children to pursue education and careers.

A team of Arizona State University graduates and students will spend a part of the summer working to expand a nonprofit venture to bring a message about higher education to orphans and foster children.

Camp H.O.P.E. (Helping Orphans Prosper through Education) was started a year ago by Tina Hakimi and Neil Saez. Hakimi recently graduated with a degree in biomedical engineering. Saez is a senior in the same program in the School of Biological and Health Systems Engineering, one of the ASU’s Ira A. Fulton Schools of Engineering. 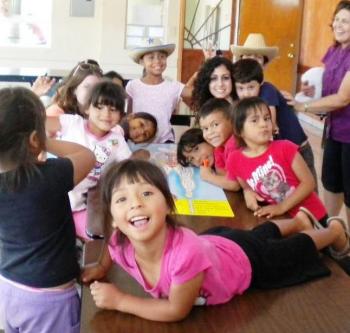 Looking to undertake a community service effort that would aid children, Hakimi contacted Saez in 2011 after learning that his father, Carlos Saez, was the founder of Friends of the Orphanages. The 25-year-old nonprofit provides funds, food and clothing for children at orphanages throughout Mexico.

Through Saez’s connection with Friends of the Orphanages, he and Hakimi were able to connect with orphanages in Mexico. By last summer they had recruited eight other ASU students to help them with Camp H.O.P.E.’s first project, putting on a camp for more than 100 children in an orphanage in Ensenada, Mexico.  The five-day camp focused each day on showcasing a different academic discipline or career field.

The Camp H.O.P.E. founders want to provide mentorship to disadvantaged youngsters “who may need the guidance of motivated college students to aspire to a career,” Hakimi says.

“Even though many of these children do go to school, the kind of education they are getting is not stimulating and it’s not encouraging them to think it could be fun or fulfilling to be a bioengineer, a political scientist or a journalist,” she says.

In Mexico last summer, Camp H.O.P.E. leaders got the children involved in educational activities such as “Project: Estado 29.” The youngsters examined orphanage buildings and identified things that posed problems, had been broken, or needed to function more effectively. Then the children worked with the camp counselors to devise solutions.

“Engineering is really about problem-solving, so our camp focuses on that,” Saez explains. “The solutions are generated from the children’s point of view, and they love that because they feel like their ideas are actually making a difference.”

The Camp H.O.P.E. counselors have continued to communicate with the children in Mexico. “It’s been cool to keep in touch with them. We have made some YouTube videos for them and have written letters to them,” as ways to continue mentoring the children, Saez says.

The team plans to organize camps for orphans and foster children in Arizona this summer. The members raised money for camp supplies and food this spring by organizing and hosting an auction and dinner.

“With the critical situation we’re facing with K-12 funding support, it’s wonderful to see students taking a lead in figuring out a unique solution and being successful in implementing it,” La Belle says.

For more information or to get involved, contact admin@camp4hope.org