Crow among most innovative leaders in higher education

Carnegie Corporation of New York has announced four recipients of its prestigious 2013 Academic Leadership Award, and ASU President Michael M. Crow is among them. 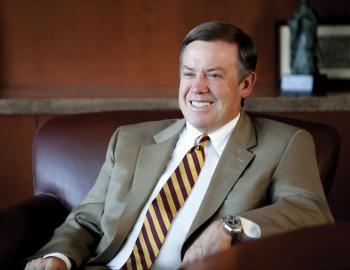 Each winner, an exceptional president of a U.S. college or university, will be awarded a $500,000 grant to be used in support of each of their academic initiatives.

Established in 2005, the Academic Leadership Award builds on Carnegie Corporation’s long tradition of developing and recognizing leadership in higher education. The award honors university presidents who are not only resourceful administrators and managers, but also have a keen interest in the liberal arts and a commitment to excellence and access, curricular innovation, reform of K-12 education, international engagement and the promotion of strong links between their institutions and their local communities.

“At a time when we all recognize that education is crucial to the future of our society, economy and democracy, the quality of the leadership of higher education institutions is of paramount importance,” said Vartan Gregorian, president of Carnegie Corporation of New York. “I’m very proud that Carnegie Corporation, since 2005, has singled out 16 exemplary college and university presidents in the United States.”

The award is distinctive because it does not give money directly to the honoree. Rather, the $500,000 grant is given to each institution to be used at the discretion of the honoree to further each winner’s academic priorities.

Crow has served as the president of Arizona State University since 2002. He has become nationally known for his commitment to innovation and to reinventing the research university model to emphasize access and excellence. In his inaugural speech, President Crow described a “New American University” measured, in large part, “not by who we exclude, but rather by who we include and how they succeed.” This has been the guiding principle of Crow’s administration.

Improving access:
Under President Crow, ASU has improved access, as measured through new student enrollment. Thirty-nine percent of the fall 2013 freshman class were students of color, which represents a 165 percent increase in minority representation in the entering freshman class since 2002. Overall, total minority undergraduate enrollment has increased 137 percent during the same period.

Socially embedded:
Crow's administration has assumed major responsibility for the economic and cultural well-being of the community with the construction of ASU’s Downtown Phoenix campus, supported by a $223 million bond issue approved by voters in 2006. The new campus, which includes the Walter Cronkite School of Journalism and Mass Communication and the College of Nursing and Health Innovation, is credited with helping to revitalize the city.

K-12 education:
ASU is committed to improving K-12 education with the 2010 restructuring of the Mary Lou Fulton Teachers College to refocus efforts on excellent teacher preparation and on research that contributes directly and fundamentally to improving the practice of K-12 education. Under a program called iTeachAZ, undergraduates spend their entire senior year in residence at a school – far more classroom time than the accreditation requirement – and are working in 31 school districts statewide.

The Academic Leadership Award reflects another dimension of Andrew Carnegie’s vision: that education is a fundamental element in strengthening the bonds of our society and our democracy. Recipients have been heads of distinguished institutions, small and large, public and private, from both coasts and in between. While each university and its constituents present a distinct set of challenges, what unites these leaders is their firm belief in the value of a high-quality college education for all, and their vigorous outreach to the wider community.

The awardees represent some of higher education’s most effective leaders. They have demonstrated true dedication to helping students achieve their aspirations, now and far into the future.

Carnegie Corporation solicits nominations from previous winners, as well as from the leaders of national organizations representing higher education. The nominations are carefully reviewed, with particular scrutiny given to a candidate’s long-term record of accomplishment and innovation.

Past winners of the Academic Leadership Award are:

Six papers in this week’s edition of the journal Science describe the main results from Curiosity’s campaign at Yellowknife Bay. Each of the papers was produced by a large team, including authors from ASU.

NASA’s Mars Science Laboratory (MSL, also known as the Curiosity rover) was sent to determine if Mars was ever hospitable to life. During the 16 months that it has spent sampling the rocks, soils and layers of sedimentary rocks in Gale crater, Curiosity has been piecing together the puzzle of Mars’ past and present habitability potential.

The latest findings indicate that the now barren surface of the planet was indeed capable of supporting life in the past. Analyses of Martian sediment samples show all the hallmarks of a habitable zone. 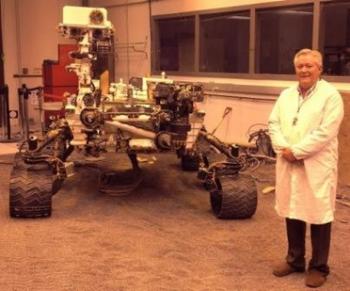 A series of six papers in this week’s edition of the journal Science describe the main results from Curiosity’s campaign at Yellowknife Bay, the lowest elevation region on the floor of Gale crater. Key results include the discovery of abundant water-bearing clay minerals and other mineral, chemical and geologic findings related to a past warmer, wetter climate regime.

Each of the papers was produced by a large team, including authors from Arizona State University.

“Shortly after we landed, Curiosity found evidence that liquid water had flowed across the surface long ago in Gale crater,” says Jim Bell, professor in ASU’s School of Earth and Space Exploration, and an author on four of the papers. “These new results, however, come from the first drilling activities ever performed on Mars, and they show that in addition to surface water, there was likely an active groundwater system in Gale crater that significantly weathered ancient rocks and minerals.”

Bell plays a leading role in the targeting and interpretation of images obtained by Curiosity’s science cameras, especially the Mast Camera (Mastcam) investigation, for which he serves as deputy principal investigator.

Curiosity’s state-of-the-art imaging system, comprised of 17 cameras, is just one part of the sophisticated suite of science instruments the rover relies on to acquire its information. Many ASU professors, researchers and students from the School of Earth and Space Exploration, as well as alumni, are involved with the rover’s instruments.

“We’ve got a great team at ASU working to help make these results from Curiosity possible,” says Bell. “Using our new image processing, laboratory and mission operations facilities, students, staff and faculty are getting some real hands-on training and experience on an active and exciting NASA planetary exploration mission.”

Farmer, a science team member for the Chemistry and Mineralogy (CheMin) instrument, is an author on two of the papers, both of which address the potential for past habitability at Yellowknife Bay and consider the potential of the environments represented for preserving fossil biosignatures.

The other papers review the current assessment and potential for organic building blocks (carbon-containing compounds) on Mars, as well as the inorganic elements making up rocks and soils, and the radiation environment. Each of the papers focuses on a broad theme of the MSL mission: geologic history, geochemistry, habitability and the current surface climate and radiation environment.

The results in these papers are all major new pieces to the puzzle of habitability on Mars, and these results will certainly influence upcoming decisions about the next generation of orbiters, landers and rovers to be sent to Mars by NASA and other space agencies.

In the meantime, Curiosity is getting closer to the base of Mt. Sharp, an ancient mound of layered sedimentary rocks, where the team will begin the next phase of their mission – climbing up through sediments spanning much of the ancient history of the Red Planet.

“Finding past environments on Mars that could have sustained life as we know it is an overarching goal of the mission," says Farmer. "There is a lot of synergy between the results from each of these papers, with clear connections to understanding the past and present habitability of Mars. From what we’ve seen, the sediments in Yellowknife Bay record important features consistent with an ancient habitable environment – evidence for liquid water, elemental building blocks needed by life and potential energy sources.”

As promising as these initial results are, the excitement continues to mount for scientists looking forward to many additional discoveries ahead.

The School of Earth and Space Exploration is an academic unit is the College of Liberal Arts and Sciences.