Students in a business journalism reporting course at the Walter Cronkite School of Journalism and Mass Communication spent their spring break in Los Angeles tracking the money side of entertainment.

The 18 ASU students met with executives at Warner Records, the Los Angeles Times and Warner Brothers Studios and watched a taping of NBC Universal’s "Tonight Show," then spread throughout the city to do stories about the financial aspects of entertainment and the people who aspire to be part of it. 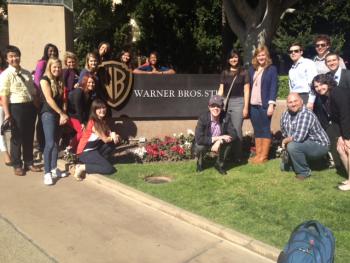 Cronkite student Daisy Prado said she gained “a new level of respect for serious journalists who work relentlessly to cover the financial realities of entertainment even when hard numbers are not readily available. I also learned more about the big gambles entertainment companies must take on a regular basis without knowing whether they will win in the end.”

Students also interviewed young dancers working toward careers in music videos, aspiring comedy writers, frustrated cartoonists and marketers sending out headshots of beginning actors. Their stories will be published on a multimedia website the students will produce before the end of the spring semester.

On Hollywood Boulevard, Cronkite graduate student Pei Li encountered a former child star who was a regular in two different TV series. Now 34, he is selling his own self-funded DVD on the street for “donations.”

“He told me how he went from making $12,000 a week on a television series to a part-time job as a cashier at Denny’s,” said Li, who interviewed the actor in a nearby McDonald’s restaurant. “This represented the other side of early success.”

“The best way to cover any industry is to become totally immersed in it,” Leckey said. “Deploying 18 energetic, financially-confident young business journalists is definitely jumping off the deep end of the pool.”

The reporting project was funded by the Donald W. Reynolds Foundation, a national philanthropic organization founded in 1954 by the late media entrepreneur for whom it is named. Headquartered in Las Vegas, it has committed over $115 million nationwide through its Journalism Program.

The Sun Devil hammer thrower became the eighth-best all-time collegiate performer in the women's hammer throw over the weekend.

The No. 8 Arizona State University women's track and field team reaped the rewards of an impressive performance at home this past weekend as senior Chelsea Cassulo has been the named the United States Track and Field And Cross Country Coaches Association's (USTFCCCA) National Athlete of the Week, the USTFCCCA announced today.

Cassulo (Lompoc, Calif.) became the eighth-best all-time collegiate performer in the women's hammer throw over the weekend with a mark of 229-0 (69.80m) at the Arizona State Invitational. 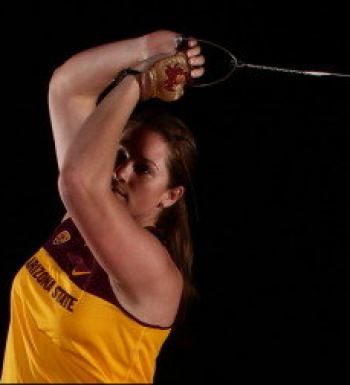 She won the event by 21 feet over the runner-up and 31 feet over the next-best collegian, and she currently holds a lead of more than 13½ feet over Ida Storm of UCLA on the 2013 collegiate performance list.

Cassulo broke the Arizona State school record previously held by Jessica Pressley of 68.31m (224-01) that was set back in 2008.  Cassulo's mark, though an opener, was further than any student-athlete through in the entirety of the 2012 season.

Cassulo is riding a wave of momentum for the Sun Devils after earning indoor All-America honors in the weight throw a couple weeks ago with a fourth-place finish in the event, despite being one of the lowest-seeded individuals coming into the event.

In its first year of being awarded, this USTFCCCA National Athlete of the Week honor is the first to be received by the Sun Devils, Cassulo, throws coach David Dumble and head coach Greg Kraft.

Awarded to six collegiate track and field and cross country athletes (male and female for each of the three NCAA divisions) each Monday by the USTFCCCA office, the National Athlete of the Week Award will spotlight exceptional performances by student-athletes from around the nation.

Nominations are open to the public. Coaches and sports information directors are encouraged to nominate their student-athletes; as are student-athletes, their families and friends, and fans of their programs.

The award seeks to highlight not only the very best times, marks and scores on a week-to-week basis, but also performances that were significant on the national landscape and/or the latest in a series of strong outings. Quality of competition, suspenseful finishes and other factors will also play a role in the decision.