The Institute for Humanities Research (IHR) at Arizona State University will be hosting a reception for its 2015 art exhibition, "The Weight of the World," from 4-6 p.m., Jan. 29, in the Harry Wood Gallery at the School of Art on the Tempe campus.

Subtitled, "A Contemporary Art Exhibition of Affect and Reason," it reflects the theme of "affect and reason" that has been guiding research and development of the IHR Fellows over the 2014-2015 year in three ways: 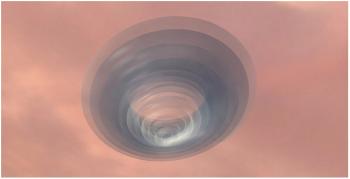 • First, with the false division of reason and affect throughout history, in a section titled "The Dichotomy and the Inevitability of Intersection." As demonstrated in various mediums in the exhibition, this dichotomy of reason/affect has traditionally been made tantamount to a male/female, fact/fiction or STEM/humanities dichotomy, respectively. All of the artists included in this section take novel and exciting approaches to understanding the blending of affect and reason in history and art.

• The second concentration of this exhibition is the incorporation of sustainability and the necessary employment of both logic and emotion to better determine its prospects. "Logic, Emotion and the Community"’ features a host of intriguing installations which blend the line between artistry and pragmatism. Other artists in this sub-category of the exhibition touch on the fact that the employment of both logic and emotion is necessary to help individuals and communities reach a higher level of environmental awareness as they make decisions about their future.

• In the third and final sub-section of the exhibition, a number of artists featured in this show focus on ideas of ecological aesthetics. In "The Visualization of Ecological Aesthetics," the theme of blending affect and reason can be seen in a number of the artists’ pieces. All of the artists in this section imagine the numerous ways in which ecological aesthetics are present in the immediate social environment of the artists, which give them their feeling of possessing a distinctively explicit social agenda.

Following the opening reception, "The Weight of the World" will be on display in Social Sciences, room 109, and the in the third and fourth floor hallways of Wrigley Hall for the rest of the spring 2015 semester. For more information, visit: https://ihr.asu.edu/news-events/events/2015-ihr-art-exhibition-opening-and-reception.

This group exhibition is created and funded by IHR in conjunction with the 2014-2015 Fellows Program. It is further supported by the Harry Wood Gallery and the Julie Ann Wrigley Global Institute of Sustainability. A number of works from the show will be featured at the 2015 Sustainability Solutions Festival, and the full exhibition will supplement Balance-Unbalance 2015, an international, interdisciplinary conference on water, climate and place. 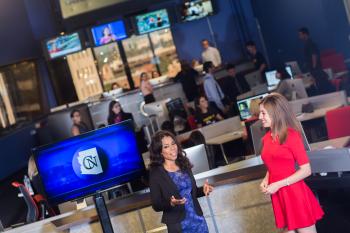 • 4:30 p.m. – BBC World News America with anchor Katty Kay provides up-to-the-minute news that goes beyond the headlines with in-depth reports on the major international stories of the day.

• 6 p.m. – PBS NewsHour with anchors Judy Woodruff and Gwen Ifill offers in-depth and nuanced national news coverage that has made it one of the most-trusted and respected news programs for nearly 40 years.

“Arizonans now can easily get a significant block of in-depth regional, national and international news and analysis on one station, uninterrupted and commercial-free,” Callahan said. “We hope the new lineup will provide an important resource to help keep Arizonans informed on the most important issues at home and around the globe.”

Arizona PBS and Cronkite also are reinventing the Cronkite News digital site to include Arizona Horizon and other public media offerings in addition to Cronkite News reports from Phoenix, Washington and Los Angeles.

Arizona PBS reaches nearly 1.9 million households across 80 percent of the state. With more than 1 million viewers weekly, Eight consistently ranks among the most-viewed public television stations per capita in the country. For more information, visit azpbs.org.