College of Law moves up on U.S. News list of best law schools

The Sandra Day O’Connor College of Law at Arizona State University has moved upward among the ranks of the nation’s leading law schools, according to the annual survey released March 13 by U.S. News & World Report.

The 2013 "Best Law Schools" report shows ASU’s law school improving across the board – in the caliber of students it attracts, the quality of education students receive, the reputation among academic peers, the recognition among judges and lawyers around the country, and its employment track record. 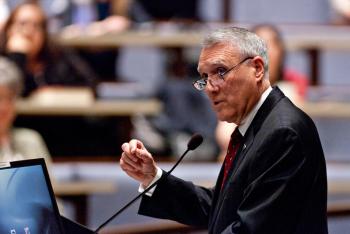 The College of Law is ranked 26th nationwide among public and private law schools, up from 40th in 2012 and is now the eighth highest-ranked public law school. The increase in the 2013 rankings follows another jump in the 2011 rankings.

In addition, the College of Law’s legal method and writing program is ranked eighth best, up from 10th on the 2012 list.

“I commend interim dean Douglas Sylvester and the faculty and staff of our law school for this accomplishment,” said ASU President Michael M. Crow. “At ASU we are developing new models of education at all levels, and it is rewarding to see that even as we explore new methods, our ranking improves on traditional quality measurement scales.”

“Although we don’t define ourselves by our ranking and, like many, view its value with skepticism, we are extremely proud of ways in which this law school has dramatically improved over the past few years," Sylvester said. "To the extent the overall rankings are a reflection of those improvements, we view it as very gratifying to be recognized for the work our team has put into elevating our college and the world-class education received by our students.”

Sylvester attributed the increase in ranking to several factors:

• Admissions: The Class of 2014 had the highest academic credentials in the law school’s 44-year history. Median Law School Admission Test (LSAT) scores of 162 and undergraduate GPA of 3.62 represent substantial improvements over prior years, and each is an historic high.

• Peer reputation: The College of Law earned its highest score ever – a 3.1 – in rankings by law school deans and professors around the country.

• Judges and lawyers rankings: The college recorded a substantial increase in this score, moving from 3.2 in 2012 to 3.5 in 2013. This assessment, by federal judges, state supreme court justices and hiring partners of the nation’s largest law firms, is the highest in the law school’s history.

• Bar passage: The Class of 2011 passed the Arizona Bar at a higher rate than any other Arizona law school and scored among the highest passage rates in the school's history.

Another contributing factor is the progress the law school has made in helping its graduates find full- and part-time employment during a disastrous period of national economic decline. According to the U.S. News formula, the College of Law succeeded in placing more than 98 percent of its graduates in employment within nine months of graduating from the law school.

“However, we do not feel this percentage paints a fully accurate picture of the financial and employment difficulties our graduates face,” Sylvester said. “We are exceedingly proud of the efforts of our Career Strategy office and the work they put in to find employment for our students, but the 98 percent is more a reflection of the formula used by U.S. News than it is reality.”

That reality, he added, “is that many of our graduates continue to pursue satisfying legal work that will be full time. Within that 98 percent is a number of part-time, short-term or even non-legal jobs.”

In anticipation of the economic difficulties faced by its graduates, the College of Law substantially revamped its Career Strategy office in May 2011 and created the Employer Outreach Initiative. This initiative offers prospective employers tools to learn about and employ the law school’s students. The program makes it easy for employers to post jobs and find qualified students and recent graduates for short-term projects or internships. Sylvester also designated a Director of Employer Relations to meet one-on-one with employers.

“The Employer Outreach Initiative has been wildly successful at connecting recent graduates with employers for full-time and part-time work, and for short-term projects –many of which do turn into permanent positions,” Sylvester said. “But we won’t rest until all of our graduates are engaged in full-time, highly productive and successful legal practices.”

Each year, U.S. News & World Report analyzes more than 1,200 graduate programs in business, education, engineering, law and science, among others, and issues its highly anticipated rankings.

The Mary Lou Fulton Teachers College has moved up significantly in one measure of the nation's highest-quality graduate programs in education.

The Mary Lou Fulton Teachers College at Arizona State University has moved up significantly in one measure of the nation’s highest-quality graduate programs in education. 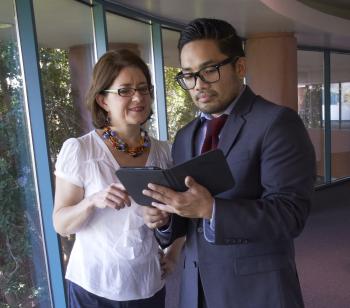 The increase comes less than two years after Teachers College expanded to serve all four campuses of ASU in metropolitan Phoenix. The college also offers a variety of undergraduate and graduate programs in communities across Arizona.

“The measure of our college is not these ratings but the quality of our extraordinary graduates,” said Mari Koerner, Teachers College dean. “These rankings are acknowledgements from external experts that our college is excellent compared to other excellent institutions in the country. But even in these comparisons, we are different. We serve more students. We take the values of the New American University seriously by being embedded in the community. And, we are preparing teachers for PreK-12 classrooms as well as university classrooms. We prepare them to make a significant difference in the lives of their students.

“This recognition also gives me an opportunity to express my appreciation to the faculty, students and staff as well as our alumni and supporters. The past year has been one of tremendous growth and change within the college, and our success is due to the hard work and flexibility of countless individuals at all levels,” Koerner said.