College of Law to hold conference on homeowner rights

The ASU Homeowner Advocacy Unit at theCollege of Law will host a day-long conference on homeowner rights under the National Mortgage Settlement, Oct. 19. The conference will feature Joseph A. Smith, National Settlement Monitor, as the keynote speaker, and will be among the first public presentations of homeowners’ rights under this historic settlement.

For tickets to this free event, which will be held from 8:30 a.m. to 5 p.m. in the College of Law’s Armstrong Hall on the Tempe campus, click here. A reception will follow.

“I recently released my first progress report on the banks’ progress under the Settlement, and I look forward to sharing what I’ve found. Additionally, improving the way consumers are treated in mortgage servicing is worthy of lengthy discussion, and I look forward to hearing the opinions of the experts who will gather to discuss these important issues,” Smith said.

The conference is open to homeowners, homeowner advocates and the public interested in learning more about the settlement.

“This will be an excellent opportunity for homeowners to hear about the status of the housing market, and opportunities for homeowners under the settlement,” said Monique Wilhite, Director of the Homeowner Advocacy Unit. “We will also have experts who understand the modification process, and some of the hurdles homeowners may face in the process.”

In February, five of the largest U.S. banks entered into a settlement agreement with 49 state attorneys general to resolve claims about the way banks serviced home loans during the mortgage crisis. The settlement resulted in more than $25 billion in monetary sanctions and relief to homeowners.  It also established new rules and regulations to which servicers must adhere when conducting transactions with borrowers.

The conference will include discussions on the progress being made under this settlement by the banks and the states. Key participants will include representatives from the Offices of the Attorneys General of Arizona, California, Nevada and New Mexico. Housing counselors have also been invited to participate.

A discussion of Arizona’s Hardest Hit Fund, established in 2010 to assist homeowners facing imminent foreclosure of their homes, and the relief programs available to them also is planned.

The College of Law’s Homeowner Advocacy Unit, housed in the Civil Justice Clinic, was founded in 2011. Funded through a grant from the Arizona Attorney General’s Office, the HAU represents borrowers who have been victims of mortgage fraud or are facing wrongful foreclosure. In addition, the program trains new attorneys in the skills needed to become effective advocates on behalf of distressed homeowners.

Faculty, students and alumni of the ASU School of Music's Lyric Opera Theatre and the School of Theatre and Film in the Herberger Institute for Design and the Arts took home an impressive number of ariZoni Awards during the theatre organization’s 2012 awards ceremony that honors professional and non-professional theatres in the greater Phoenix area. 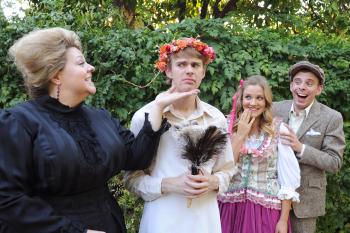 Rachel Bowditch, School of Theatre and Film assistant professor, won best director for "The Sun Serpent," the epic tale of Aztec culture and the conquest of Mexico that she co-wrote and that was staged to rave reviews during its run at Childsplay last spring. Associate Professor Connie Furr-Soloman, costume designer, won for costume design for "The Sun Serpent," which also took home the Best Overall Production for a Contracted Theater.

ASU School of Theatre and Film Professor David Barker was recognized for his choreography of "Romeo and Juliet" produced by the Southwest Shakespeare Company and MFA student Brunella Provvidente took home the award for Scenic Design of a Non-contracted Play for her work in the ASU MainStage production of "The House of the Spirits." School of Music student Katie Frederick won Best Supporting Actress in a Musical of a Non-contracted show for the Mesa Encore Theatre’s production of "Hairspray."

The ariZoni Awards ceremony came as ASU MainStage and Lyric Opera Theatre are launching their ambitious 2012-13 seasons. The first of two world premieres, "POVV" by Punctum, opens the MainStage season Sept. 28. This provocative, mind-bending show created by 13 graduate students from the School of Theatre and Film explores questions of human connectedness in the digital age. For more information and to buy tickets for the season visit MainStage.

Lyric Opera Theatre begins its 49th season with a lively romp through an English village with its production of "Albert Herring" that opens Oct. 4. Its season includes the full production of Die Fledermaus, the musical version of "Little Women" and the fantastical, "Bat Boy: The Musical." For ASU students, faculty and staff are eligible for discounted tickets to the Herberger Institute’s complete performing arts series. Buy tickets online at the Herberger Institute Box Office, calling 480.965.6447 or by visiting the Box Office at Nelson Fine Arts Center on the ASU Tempe campus.