Imagine, deep in the tropical jungle of southern Mexico, the base of a mountain is visible across a smooth lake, otherwise obscured by morning mist. It’s so quiet it feels mystical and possibly uncomfortable — like something else is there, unheard.

And maybe there is. 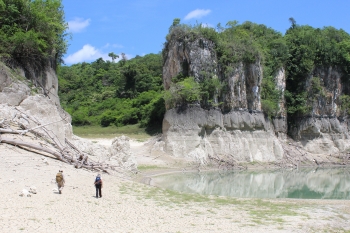 ASU archaeologist Joel Palka and a team of researchers have been working with Lacandon Maya for 17 years. Thought to be descendants of the ancient Maya, the Lacandon have never been conquered. Today, they still live in Maya territory and carry on ancestral knowledge of traditions and beliefs.

A cliff along the lake, Writing House, is where souls are said to travel before arriving at their resting place. Another cliff near Mirador mountain is thought to be the home of Mensäbäk, a Lacandon god who keeps souls. Marked by red rock paintings on the cliff face, this is where past peoples have been interred and shrines are still present today. This spiritual ground has been a major Maya pilgrimage site for more than 2,000 years.

The present-day Lacandon Maya now know more than ever before about their land and ancestors. Archaeologists and Lacandon have excavated spiritually significant sites together. Thanks to a remote sensing project, the research team facilitated a lidar survey to better understand the area’s geography and create a map. In the last two decades, the Lacandon have built infrastructures and programs to host ecotourism.

“Time has deepened our knowledge of our work as well as the lives of Lacandon collaborators in Mensäbäk,” the research team wrote in The Mayanist. “Most of what we have learned comes from living in the community on a daily basis for long periods. We have shared our insights with Lacandon and Tzeltal Maya residents while sitting in house gardens, participating in family dinners, during excavations and walking through forests rather than formal, short-term interviews.”

Palka and the Mensäbäk Archaeological Project are featured in the October issue of Scientific American magazine (“The Maya who escaped Spanish conquest”) and the fall issue of The Mayanist journal (“Long-term collaborative research with Lacandon Maya at Mensäbäk, Chiapas, Mexico”).