Bacterial flora inhabiting the human gut have become one of the hottest topics in biological research. Implicated in a range of important activities – including digestion, fine-tuning body weight, regulating immune response and producing neurotransmitters that affect brain and behavior – these tiny workers form diverse communities. Hundreds of species inhabit the gut, and although most are beneficial, some can be very dangerous.

In new research appearing in the journal PLOS ONE, a team led by Rosa Krajmalnik-Brown, a researcher at Arizona State University’s Biodesign Institute, presents the first comprehensive bacterial analysis focusing on commensal or beneficial bacteria in children with autism spectrum disorder (ASD). 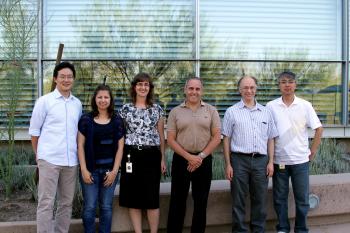 After publishing earlier research exploring crucial links between intestinal microflora and gastric bypass, Krajmlanik-Brown convinced James Adams, director of the ASU Autism/Asperger’s Research Program, that similar high throughput techniques could be used to mine the microbiome of patients with autism. Previously, Adams had been studying the relationship between the gut microbiome and autism using traditional culturing techniques.

“One of the reasons we started addressing this topic is the fact that autistic children have a lot of GI problems that can last into adulthood,” Krajmalnik-Brown  says. “Studies have shown that when we manage these problems, their behavior improves dramatically.”

Following up on these tantalizing hints, the group hypothesized the existence of distinctive features in the intestinal microflora found in autistic subjects compared to typical children. The current study confirmed these suspicions and found that children with autism had significantly fewer types of gut bacteria, probably making them more vulnerable to pathogenic bacteria. Autistic subjects also had significantly lower amounts of three critical bacteria: Prevotella, Coprococcus and Veillonellaceae.

Krajmalnik-Brown, along with the paper’s lead authors Dae-Wook Kang and Jin Gyoon Park, suggest that knowledge gleaned through such research may ultimately be used both as a quantitative e diagnostic tool to pinpoint autism and as a guide to developing effective treatments for ASD-associated gastrointestinal (GI) problems. The work also offers hope for new prevention and treatment methods for ASD itself, which has been on a mysterious and rapid ascent around the world.

Autism is defined as a spectrum disorder due to the broad range of symptoms involved and the influence of both genetic and environmental factors; features that often confound efforts at an accurate diagnosis. The disease’s prevalence in children exceeds juvenile diabetes, childhood cancer and pediatric AIDS, combined.

Controversy surrounds the apparent explosive rise in autism cases. Heightened awareness of autism spectrum disorders and more diligent efforts at diagnosis must account for some of the increase, yet many researchers believe a genuine epidemic is occurring. In addition to hereditary components, Western-style diets and overuse of antibiotics at an early age may be contributing to the problem by lowering the diversity of the gut microflora.

In terms of severe developmental ailments affecting children and young adults, autism is one of the most common, striking about one in 50 children. The disorder, often pitiless and perplexing, is characterized by an array of physical and behavioral symptoms, including anxiety, depression, extreme rigidity, poor social functioning and an overall lack of independence.

To date, studies of the gut microbiome in autistic subjects have focused primarily on pathogenic bacteria, some of which have been implicated in alterations to brain function. One example involves gram-negative bacteria containing lipopolysaccharides in their cell walls, which can induce inflammation of the brain and lead to the accumulation of high levels of mercury in the cerebrum.

Krajmalnik-Brown and lead author Dae-Wook Kang are researchers in the Biodesign Institute’s Swette Center for Environmental Biotechnology, which is devoted to the use of microbial communities for the benefit of human and environmental health. Their new study is the first to approach autism from a different angle, by examining the possible role of so-called commensal or beneficial bacteria.

Up to a quadrillion bacteria inhabit the human intestine, contributing to digestion, producing vitamins and promoting gastrointestinal health. Genes associated with human intestinal flora are 100 times as plentiful as the body’s human genes, forming what some have referred to as a second genome. Various environmental factors can destabilize the natural microbiome of the gut, including antibiotics and specific diets.

In the current study, a cohort of 20 healthy and 20 autistic subjects between three and 16 years of age were selected, and their gut microflora from fecal samples analyzed by means of a technique known as pyrosequencing. Pyrosequencing is a high-throughput method, allowing many DNA samples to be combined, as well as many sequences per sample to be analyzed.

Lower diversity of gut microbes was positively correlated with the presence of autistic symptoms in the study. The authors stress that bacterial richness and diversity are essential for maintaining a robust and adaptable bacterial community capable of fighting off environmental challenges. “We believe that a diverse gut is a healthy gut,” Krajmalnik-Brown says.

The new study detected decreased microbial diversity in the 20 autistic subjects whose fecal samples were analyzed. Specifically, three bacterial genera – Prevotella, Coprococcus and Veillonellaceae – were diminished in subjects with autism when compared with samples from normal children. Surprisingly, these microbial changes did not seem directly correlated with the severity of gastrointestinal symptoms.

The three genera represent important groups of carbohydrate-degrading and/or fermenting microbes. Such bacteria could be critical for healthy microbial-gut interactions or play a supportive role for  a wide network of different microorganisms in the gut. The latter would explain the decreased diversity observed in autistic samples.

Bacteria: in sickness and in health

Among the fully classified genera in the study, Prevotella was the most conspicuously reduced in autistic subjects. Prevotella is believed to play a key role in the composition of the human gut microbiome. For this reason, the group undertook a sub-genus investigation of autistic subjects. They found that a species known as Prevotella copri occurred only in very low levels in the autistic samples. The species is a common component in normal children exhibiting more diverse and robust microbial communities.

“We think of Prevotella as a healthy, good thing to have,” Krajmalnik-Brown notes. (Michael Pollan’s recent New York Times Magazine story on the microbiome points to the fact that he is proud that his gut microbiome is rich in Prevotella regarding it as a possible sign of a healthy non-Western diet. )

Jin Gyoon Park, the other lead author, who works in the Virginia G. Piper Center for Personalized Diagnostics under the direction of Joshua LaBaer, conducted a rigorous bioinformatic and statistical analysis of the intestinal microflora. He believes that the microbiome can be mined in future work to find diagnostic biomarkers for autism and many other diseases. Quantitative diagnoses of this sort have so far been lacking for autism, a disease for which subjective behavior indices are typically used to identify the disorder.

In describing the next steps for the research group, Kang and Park point to more detailed, gene-level analyses aimed at probing bacterial function and further illuminating relationships between human health and the complexities of the microbiome. Additionally, the group will use the current results as a guide for new treatment studies for autism aimed at modifying bacterial composition in the gut.

A new, interdisciplinary consortium (Autism Microbiome Consortium) has been formed to investigate the underpinings of autism and the gut microbiome, bringing together the combined skills of neurologists, psychiatrists, neuroimmunologists, epidemiologists, pediatricians, geneticists, biochemists, microbiologists and others.

Cronkite professor Sharon Bramlett-Solomon was recently recognized by the Maricopa County Branch of the NAACP for outstanding teaching and exemplary community leadership sevice.

The Maricopa County Branch of the National Association for the Advancement of Colored People has recognized Sharon Bramlett-Solomon, an associate professor at ASU’s Walter Cronkite School of Journalism and Mass Communication, for outstanding teaching and exemplary community leadership service.

Bramlett-Solomon is the 2013 recipient of the organization’s Educator Award, given to an educator whose “teaching and scholarship accomplishments have made a noted and indelible mark in the community and on the profession,” according to the NAACP. 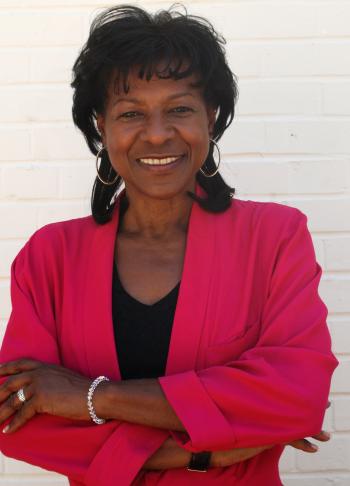 Bramlett-Solomon has taught at the Cronkite School since 1986 and also is a Lincoln Center of Applied Ethics Professor of Media & Culture. The Lincoln Center is a research unit located in the ASU College of Liberal Arts and Sciences that supports innovative, collaborative and multidisciplinary research on contemporary issues ranging from biomedical research and warfare to emerging technologies.

“Professor Bramlett-Solomon has been a leading voice on a wide array of journalism diversity issues for many years, not just here at the Cronkite School, but nationally,” said Christopher Callahan, dean of the Cronkite School. “We're delighted that the NAACP is recognizing her great contributions to our field.”

Bramlett-Solomon said she is both honored and humbled by the award selection. “It is with inexpressible elation and heart-felt appreciation that I humbly accept the NAACP’s top educator recognition. Please know that because of the organization’s long-time legacy as a stalwart of grassroots community involvement, activism and advancement, this honor is especially close to my heart,” Solomon-Bramlett said in accepting the award. “Moreover, as a Cronkite School and Lincoln Center professor, a great deal of my scholarship, teaching and professional service addresses social justice and applied media ethics issues, all of which makes the NAACP’s acknowledgement all the more personally gratifying and cherished.”

Bramlett-Solomon’s career includes seven years in newspaper reporting, public relations and radio advertising sales. She worked as a reporter for the Memphis Commercial Appeal and Louisville Courier-Journal newspapers, served as public information director for the Memphis Urban League and worked as an account executive at WDIA radio station in Memphis.

Her research focuses on audience effects of race representation in the United States, and she has published studies on aging and online news diffusion. She has presented and published more than 100 scholarly papers in scholarly journals that include Journalism and Mass Communication Quarterly, Newspaper Research Journal, Southwestern Journal of Communication, the Howard Journal of Communication and the Journal of Children and Media. A second edition of Bramlett-Solomon’s book, “Race, Gender & Class in Media,” which is used in college classrooms across the country, will be published in 2014. She also is writing a book on “Colorism in Mass Media and American Culture.”

Her work also has appeared in magazines and newspapers, including The Arizona Republic, the East Valley Tribune, the Arizona Informant, Focus, Essence and Today’s Arizona Woman.

At the Cronkite School, Bramlett-Solomon has taught news writing and reporting; advanced reporting; ethics and diversity; media and society; mass communications history; race, gender and media; and graduate courses in media theories. She is the recipient of local and national awards for her teaching, scholarship and service, including the Barry Bingham Award from the National Conference of Editorial Writers Foundation, the Professor of the Year Award from the Association for Education in Journalism and Mass Communication, and the Top Educator award from the Black Women’s Task Force. She also has received a number of teaching, research and service awards at ASU, where she has mentored hundreds and taught thousands of future journalists and communications professionals.