Phoenix, the sixth largest U.S. city, is vulnerable to water shortages even without climate change because of heavy outdoor water use and fragmented governance, according to research conducted at the Decision Center for a Desert City (DCDC) at Arizona State University. 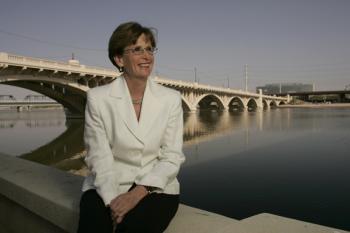 “Scientists see a demand problem; decision-makers see a supply problem; and residents see someone else’s problem,” said Gober, a founding director of DCDC. Gober presented findings from simulation modeling and the principles of decision-making during a session on water security, Feb. 17, at the annual meeting of the American Association for the Advancement of Science.

Under the National Science Foundation’s Decision Making Under Uncertainty program, DCDC developed an integrated simulation model – WaterSim 4.0 – and tested it with local water stakeholders to explore decision tradeoffs for a range of climate and policy futures.

“Tradeoffs involved choices between indoor and outdoor water use, residential densities and per-capita water use, prevailing lifestyles and groundwater sustainability, and a more compact versus sprawling city,” Gober said.

Climate change, according to Gober “offers us the opportunity to think seriously about what kind of future we want and what we are willing to do to get there. We can build a less climate-sensitive city than we now have.”

Gober splits her research and scholarship between Arizona State University, where she is a research professor in the School of Geographical Sciences and Urban Planning in the College of Liberal Arts and Sciences, and a professor in the Johnson-Shoyama Graduate School of Public Policy at University of Saskatchewan.

Graduate students from the Decision Center for a Desert City’s Community of Graduate Research Scholars will present their research at the American Association for the Advancement of Science Annual Meeting in Vancouver on Feb. 19. They will be accompanied by Margaret Nelson, DCDC co-PI and Dave White, DCDC associate director. READ MORE

The Sun Devils look to bounce back from losses to Arizona and Utah.

The Illinois meet will serve as ASU’s Pink Meet of the season. Despite not having pink leos to wear, the Gym Devils, partnering with the Susan G. Komen Foundation, encourage all fans to wear pink to bring awareness to those affected by breast cancer. Prior to the start of the meet, the Sun Devils will honor former ASU men’s gymnastics head coach Don Robinson, who passed away in July at the age of 80.

After recording their first losses of the season last weekend, the Sun Devils look to bounce back against the Big Ten competition Illinois. Ranked 25th for the second-consecutive week, ASU moved up in the event rankings to 17th on beam, 23rd on bars and 27th on vault. Against Utah, the Sun Devils recorded a season-high 49.000 on vault.

The Fighting Illini are averaging a meet score of 194.860 including a season-high score of 195.700 set in a dual meet against Ohio State. The Illini host Michigan State on Friday before traveling out to Tempe for the meet Sunday.