The expected impact of climate change on North American lizards is much worse than first thought. A team of biologists led by Arizona State University investigators has discovered that lizard embryos die when subjected to a temperature of 110 degrees Fahrenheit even for a few minutes.

The researchers also discovered a bias in previous studies, which ignored early life stages such as embryos. Embryonic lizards are immobile and cannot seek shade or cool off when their surrounding soil becomes hot. 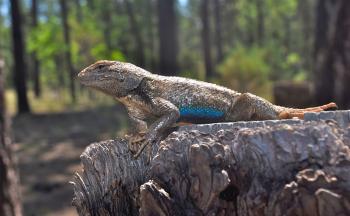 This bias produced overly optimistic forecasts about the fate of lizards during climate change. Given the potential impacts on embryos, many more places in the United States could become uninhabitable for lizards than previously expected.

“Lizards put all of their eggs in one basket, so a single heat wave can kill an entire group of eggs,” said Ofir Levy, lead investigator of the study and postdoctoral fellow with ASU School of Life Sciences. “If mothers don’t dig deeper nests to lay their eggs, we expect this species to decline throughout the United States.”

The findings appear today online in the journal Proceedings of the Royal Society B.

After finding that lizard embryos cannot tolerate 110 degrees Fahrenheit for even a short period, the researchers used a climate model to predict how often heat waves in the past and future would kill developing lizards. Areas in the U.S. reaching lethal temperatures, even in the shade, could spread from 3 percent currently to 48 percent of the country in the next century.

Female lizards lay eggs in spring and summer, digging nests and then leaving their offspring to develop for more than two months. Mothers may choose shadier soils or dig deeper nests to help their offspring avoid the heat. But even if lizards lay eggs in cooler places, nests may still exceed the temperatures that embryonic lizards can tolerate. And, assuming that baby lizards could reach the surface after hatching from a deeper nest, that still may not offer enough protection. Repeated exposure to above-average but not lethal temperatures can negatively affect a lizard’s physiology and behavior.

“Since this year promises to be the hottest on record, we are asking whether organisms, like lizards, can adjust to their warming world,” said Michael Angilletta, professor and senior sustainability scientist with ASU School of Life Sciences. “It’s critical that we acquire detailed knowledge about what temperatures these lizards and other animals can tolerate throughout the life cycle, not just as adults.”

Levy added: “Because lizards are prey for animals such as birds, snakes and mammals, the harmful effects of climate change on embryonic lizards could also negatively affect other species.”

School of Life Sciences is an academic unit of ASU's College of Liberal Arts and Sciences.

For the first time, a journalism school will receive the highest honor given by the Rocky Mountain Southwest Chapter of the National Academy of Television Arts & Sciences for an ASU documentary on heroin that reached more than 1 million Arizonans.

An Arizona State University documentary about heroin will receive the highest honor given by the Rocky Mountain Southwest Chapter of the National Academy of Television Arts & Sciences (NATAS). It is the first time a journalism school will receive the award.

The NATAS Rocky Mountain Southwest Chapter will honor ASU’s Walter Cronkite School of Journalism and Mass Communication and the Arizona Broadcasters Association with the Governors’ Award in October for the documentary “Hooked: Tracking Heroin’s Hold on Arizona,” which aired on all 33 broadcast television stations and 93 radio stations in Arizona in January and reached more than 1 million Arizonans. 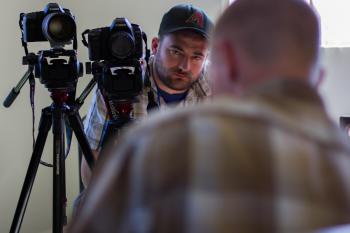 “The ‘Hooked’ campaign by the Arizona Broadcasters Association and Cronkite School addresses an issue that plagues so many members of our community,” said Theresa Maher, president of the NATAS Rocky Mountain Southwest Chapter. “We hope that their raw look into the world of heroin use will change the course of many lives for the better.”

The 30-minute documentary, produced by the Cronkite School in association with the Arizona Broadcasters Association, traces the rise of heroin use and its impact on Arizonans through the stories of addicts struggling with sobriety, families grappling for solace and law enforcement officials battling on the frontlines. More than 70 students and eight faculty members at the Cronkite School worked on the project under the direction of Cronkite professor Jacquee Petchel, a Pulitzer Prize-winning investigative journalist.

“The award represents a significant contribution to public service,” Petchel said, “and it says a lot about our students and how the Cronkite School prepares them to produce compelling journalism.”

During and after the simulcast, 100 recovery counselors answered hundreds of calls at an Arizona Broadcasters Association-sponsored call center at Arizona PBS for assistance on heroin and opioid addiction.

“The Governors’ Award greatly acknowledges what was not only historic with the airing of the ‘Hooked’ project, but honors the students, professors, leadership at Cronkite as well as the character of every local TV station and 93 radio stations in the state that provided the valuable airtime and the professionals at the front line in taking the calls that flooded the call center that evening,” said Arizona Broadcasters Association President and CEO Art Brooks. “I have no doubt lives were changed and saved that night and since Jan. 13.”

The Governors’ Award is the second professional honor Cronkite students have won for “Hooked.” In May, students took first place in video storytelling at the Arizona Press Club Awards, marking the first time in the history of the contest that students of any university beat professional journalists.

The Governors’ Award recognizes individuals and organizations for going above and beyond in telecommunications profession. “Hooked” shares this year’s award with KSL in Salt Lake City.

“This award demonstrates the extraordinary power and impact that outstanding ASU students working with inspiring faculty members can produce for our community,” said Christopher Callahan, dean of the Cronkite School. “We are extremely honored to receive this award, unprecedented for a university.”

NATAS is a professional service organization dedicated to the advancement of the arts and sciences of television and the promotion of creative leadership for artistic, educational and technical achievements within the television industry. The Rocky Mountain Southwest Chapter, formed in 1959, represents Arizona, New Mexico, Utah, Wyoming and El Centro, California.

Founded in 1952, the Arizona Broadcasters Association functions as a 501(c)6 nonprofit corporation, and is the official trade association serving all free, over-the-air radio and television stations in Arizona. The ABA’s mission is to serve, educate and advocate for its members as well as the general public.