Plant and animal species are shifting their geographic ranges and the timing of their life events – such as flowering, laying eggs or migrating – at faster rates than researchers documented just a few years ago, according to a technical report on biodiversity and ecosystems used as scientific input for the 2013 Third National Climate Assessment.

The report, "Impacts of Climate Change on Biodiversity, Ecosystems, and Ecosystem Services," synthesizes the scientific understanding of the way climate change is affecting ecosystems, ecosystem services and the diversity of species, as well as what strategies might be used by natural resource practitioners to decrease current and future risks. More than 60 federal, academic and other scientists, including the lead authors from the U.S. Geological Survey, the National Wildlife Federation and Arizona State University in Tempe, authored the assessment. 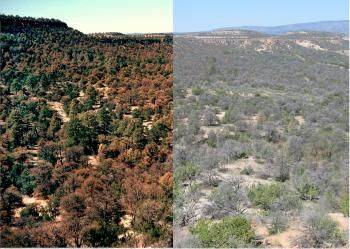 "These geographic range and timing changes are causing cascading effects that extend through ecosystems, bringing together species that haven't previously interacted and creating mismatches between animals and their food sources," said Nancy Grimm, a professor in Arizona State University's School of Life Sciences in the College of Liberal Arts and Sciences and a lead author of the report.

Grimm, who is also a senior sustainability scientist at ASU's Global Institute of Sustainability, explained that such mismatches in the availability and timing of natural resources can influence species' survival; for example, if insects emerge well before the arrival of migrating birds that rely on them for food, it can adversely affect bird populations. Earlier thaw and shorter winters can extend growing seasons for insect pests such as bark beetles, having devastating consequences for the way ecosystems are structured and function. This can substantially alter the benefits people derive from ecosystems, such as clean water, wood products and food.

"The impact of climate change on ecosystems has important implications for people and communities," said Amanda Staudt, a NWF climate scientist and a lead author on the report. "Shifting climate conditions are affecting valuable ecosystem services, such as the role that coastal habitats play in dampening storm surge or the ability of our forests to provide timber and help filter our drinking water."

Another key finding is the mounting evidence that population declines and increased extinction risks for some plant and animal species can be directly attributed to climate change. The most vulnerable species are those already degraded by other human-caused stressors such as pollution or exploitation, unable to shift their geographic range or timing of key life events, or that have narrow environmental or ecological tolerance. For example, species that must live at high altitudes or live in cold water with a narrow temperature range, such as salmon, face an even greater risk due to climate change.

"The report clearly indicates that as climate change continues to impact ecological systems, a net loss of global species’ diversity, as well as major shifts in the provision of ecosystem services, are quite likely," said Michelle Staudinger, a lead author of the report and a USGS and University of Missouri scientist.

For example, she added, climate change is already causing shifts in the abundance and geographic range of economically important marine fish. "These changes will almost certainly continue, resulting in some local fisheries declining or disappearing while others may grow and become more valuable if fishing communities can find socially and economically viable ways to adapt to these changes."

Natural resource managers are already contending with what climate change means for the way they approach conservation. For example, the report stated, land managers are now more focused on the connectivity of protected habitats, which can improve a species’ ability to shift its geographic range to follow optimal conditions for survival.

"The conservation community is grappling with how we manage our natural resources in the face of climate change, so that we can help our ecosystems to continue meeting the needs of both people and wildlife," said Bruce Stein, a lead author of the report and director of climate adaptation at the National Wildlife Federation.

Other key findings of the report include:

• Changes in precipitation and extreme weather events can overwhelm the ability of natural systems to reduce or prevent harm to people from these events. For example, more frequent heavy rainfall events increase the movement of nutrients and pollutants to downstream ecosystems, likely resulting not only in ecosystem change, but also in adverse changes in the quality of drinking water and a greater risk of waterborne-disease outbreaks.

• Changes in winter have big and surprising effects on ecosystems and their services. Changes in soil freezing, snow cover and air temperature affect the ability of ecosystems to store carbon, which, in turn, influences agricultural and forest production. Seasonally snow-covered regions are especially susceptible to climate change because small precipitation or temperature shifts can cause large ecosystem changes. Longer growing seasons and warmer winters are already increasing the likelihood of pest outbreaks, leading to tree mortality and more intense, extensive fires. Decreased or unreliable snowfall for winter sports and recreation will likely cause high future economic losses.

• The ecosystem services provided by coastal habitats are especially vulnerable to sea-level rise and more severe storms. The Atlantic and Gulf of Mexico coasts are most vulnerable to the loss of coastal protection services provided by wetlands and coral reefs. Along the Pacific coast, long-term dune erosion caused by increasing wave heights is projected to cause problems for communities and for recreational beach activities. However, other kinds of recreation will probably improve due to better weather, with the net effect being that visitors and tourism dollars will shift away from some communities in favor of others.

• Climate change adaptation strategies are vital for the conservation of diverse species and effective natural resource policy and management. As more adaptive management approaches are developed, resource managers can enhance the country’s ability to respond to the impacts of climate change through forward-looking and climate science-informed goals and actions.

• Ecological monitoring needs to be improved and better coordinated among federal and state agencies to ensure the impacts of climate change are adequately monitored and to support ecological research, management, assessment and policy. Existing tracking networks in the United States will need to improve coverage through time and in geographic area to detect and track climate-induced shifts in ecosystems and species.

Background: Federal law requires that the U.S. Global Change Research Program submit an assessment of climate change and its impacts to the President and the Congress once every four years. Technical reports, articles and books – such as this report -- underpin the corresponding chapters of the Third U.S. National Climate Assessment, due out in 2013. This technical report is available at the USGCRP website, as are other completed technical reports. Additional lead authors of this report include Shawn Carter, USGS: F. Stuart Chapin III, University of Alaska, Fairbanks; Peter Kareiva, The Nature Conservancy; and Mary Ruckelshaus, Natural Capital Project.

Food can be dropped off at men's basketball games, CSAC, Old Main and the MU.

Arizona State University and Sun Devil Athletics are holding a cross-campus food drive as part of the Kraft Fight Hunger Bowl, held on Dec. 29 at AT&T Park in San Francisco.

"Playing in the Kraft Fight Hunger Bowl is a great opportunity for our football program," Vice President of University Athletics Steve Patterson said. "However, it also offers us an ideal chance to give back to the community, especially during the holidays when no one should be without food."

There will be locations for food drop off at men's basketball games and at the Carson Student-Athlete Center, as well as Old Main and the Memorial Union on the Tempe Campus.

"As a prominent part of the Phoenix community, it is important for ASU to use its resources to help those in need," CEO of the ASU Foundation for a New American University Rick Shangraw said. "We hope that students, faculty, alumni and fans, among others, will show their support for a great cause."

Christine K. Wilkinson, president of the ASU Alumni Association and senior vice president and secretary of the university, said the drive is a wonderful opportunity for ASU fans to balance the excitement of the bowl game with the generous giving for which the university community is known. She noted the ASU Alumni Association leadership held its own food drive in support of the initiative.

"Sun Devil spirit goes beyond cheering for the maroon and gold as they take to the gridiron," Wilkinson said. "The food drive is an opportunity for the ASU family to demonstrate its passion for stepping up to meet a community need. This food drive serves as yet another example of ASU's commitment to social engagement and playing a vital role in leveraging place. The University is proud to partner with United Way to combat chronic hunger for 82,000 households in Maricopa County, and champion ending hunger across our state."