Winning note will be beamed into space April 9


“Dear Aliens. We study you. Do you take that personally?” “If you don’t want to be called aliens then tell us.” “I am from Earth. It’s as vivid as a comet. My huge, beautiful planet has water, land, and an atmosphere.” “This is how we look like. We have hair. Hair is like strings hanging out my head.” “Do you celebrate any special alien events?” “Have you heard of school?” “Everybody on earth comes in peace. Please do not eat all of us. If you do, you won’t have anything to eat.” 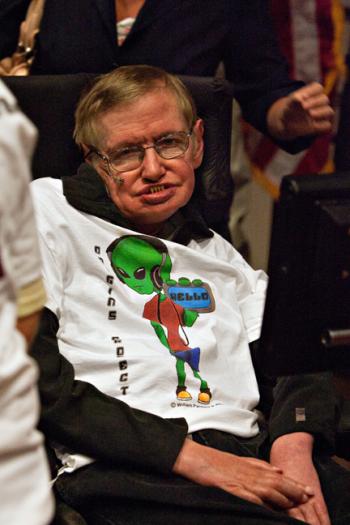 
Those were a few of the questions and bits of information about Earth from the hundreds of letters written by kindergarteners, middle school and high school students who live in metropolitan Phoenix and entered an intergalactic-focused writing contest launched by the Arizona State University Origins Project as part of its science and culture festival.


Children in Maricopa County, Ariz., home to ASU, were invited to craft a short message to an extraterrestrial intelligent life form. Winners from different grade categories were selected this week and will be recognized at a special event April 9 at 1 p.m., on the ASU Tempe campus, in Design Center North Room 60 (CDN 60). At that time, a message containing 144 characters based the overall winning entry will be sent into space via a moonbounce.


Lucy Hawking, the contest creator and a British author and journalist who is the first Origins writer-in-residence at ASU, asked children: “How might we communicate if we made contact with an alien civilization.”


The young epistolary writers took that challenge to heart, according to Hawking.


“The letters we received were amazing," Hawking said. "Some writers described our planet, others described themselves. They wrote about school, transportation, technology, language, including sign language, and jobs. There were pleas for peace and warnings of being armed if the aliens wanted to invade.”


“And, there was lots of useful advice, like ‘bring money’ and ‘if you land in Arizona, drink lots of water.’ One writer gave directions to find us: ‘You have to look for a planet that has a whole bunch of swirly white clouds,’” said Hawking who has written a popular young-adult book series with her father, theoretical physicist Stephen Hawking.


The overall winning entry was written by Benjamin Lee, a seventh-grader from Pardes Jewish Day School in Phoenix. In his letter he wrote:


“Dear Aliens, Please help us save our world. Not, from you, from ourselves. We are destroying our planet and need help from more technologically-advanced beings. Our planet is polluted, many nations are at war, there is civil unrest, and our economy is in turmoil. Perhaps you can save our world. We’re sure that you are friendly beings, as you have traveled so far to see us. Please come live among us and share your wisdom with us; we really need it.


“We have many similarities to you. Like you, we have explored space travel, and we too are living, sentient, intelligent beings. We are the third planet orbiting around a medium-sized yellow star, called the sun, (93,000,000 miles away). Our planet, Earth, began as a ball of rock, and we have carbon-based creatures living on it. We have evolved from single-celled organisms, into other forms of vertebrate and invertebrate creatures. Our planet has water, plants and an atmosphere which contains oxygen. The farthest we have travelled in manned spacecraft was to our own moon, which isn’t’ far,” Lee wrote. He concluded his letter with: “Maybe someday we can come to your planet and live among you.”


Eight other winners, two from each grade category, also were selected. Below are excerpts from their letters:


“Dear Aliens, Welcome to our planet. If you land in Arizona, you’ll be in the desert. And if you do land in Arizona drink lots of water,” wrote Sophia Suda, a kindergartener from Broadmor Elementary School in Tempe.


“What would I do with an alien? I would do sign language with my hands. I would make sure that he has some food after his long trip and ask him to be my friend,” wrote Angela Perez, a second-grader from Kenilworth Elementary School in Phoenix.


“Humans and other creatures live on Earth. Some are endangered. Humans can keep pets. Humans use different methods of technologies like aircraft, cars, trains, computers, TV, phone, etc. Curious Questions: Is your aircraft U.F.O.s? What do you do against pollution? What is your planet’s name?” asked Udayketan Mohanty, a fourth-grader from Kyrene del Cielo Elementary School in Chandler.


“Hello, we are Humans. Humans have been exploring space since a very long time. Since you are here you have probably found one of our voyager golden records with the information on humans and our planet. Our people are longing to meet you. We come in peace, though if you were to attack us we are armed and ready to defend ourselves,” wrote Thomas “Tommy” Grau Walton, a fifth-grader from Phoenix Country Day School in Paradise Valley.


“Dear other worldly being, I am formally writing to your species to inform you of our planet’s many life forms and land masses and to insure peace between us. Our planet is called earth. We have many diverse cultures here. We have no intentions to harm you and your species; in fact, we would be enlightened to learn more about you, and to interact with you someday. We are simply interested in the never-ending vastness of space, as I am sure you are too,” wrote Madelyn Norstrem, a seventh-grader in Foothills Academy College Preparatory in Scottsdale.


“Dear Superior Being. Humans are beings that inhabit this planet. Each human is different in their own special way. We have things called emotions that show what we are feeling. For example when we feel happy-the feeling enrichens us with joy. We also have characteristics like integrity, responsibility and honesty. These things make up our character. Humans have things called countries that we live in. Sometimes we have disputes over them. This causes a thing called war which two or more of these countries fight over to the death,” wrote Mason Bartelt, a seventh-grader in Foothills Academy College Preparatory in Scottsdale.


“Dear Aliens, I am one of the people on Earth. First, I am sorry to call you Aliens. I know you may have a name, but on earth that is what we call strangers to our planet. I would like to tell you that our planet is so beautiful with blue oceans and blue sky. Also, the humans on Earth are strange. They have a lot of ideas; some are crazy, comical, serious and sensitive. If you come to Earth I am sure that you would like it. Another thing I would like to tell you is how people have changed the Earth. Some people think that we have destroyed it and others think that we have made it better. Both ideas might be right. I think we have destroyed it because we made a lot of wars. On the other hand, I think we have made it better because we made some forest preserves to protect it from any danger. Changing things for the better is a good idea. Don’t you think so?” asked Qabas Jalil, a ninth-grader from Washington High School in Phoenix.


“On behalf of all humanity I welcome you to Earth. As you can see our planet is teaming with life. Curiosity and skepticism is quite literally in our logical nature, as I am sure it is the same with your kind as well. The human race is thought, according to many religions, to be created by one divine entity using his own image. With you standing here today, it shows all of us that we are not alone in the universe and that our species is just one of many in the vast uncharted wilderness we call space,” wrote Allison LaMountain, an 11th-grader from Primavera Online High School in Chandler.


While children were coming up with messages to send to aliens, scientists at ASU and in the community were finalizing the technology that would be used to send a 144-character message from the winning entry into space.


“Early wireless communication capability relied on the reflection of radio frequency (RF) energy from layers of ionized particles in the Earth’s ionosphere to propagate signals over the horizon to create communication paths over long distances,” said Ned Stearns, an amateur radio operator in Scottsdale who will initiate a moonbounce to send the message into space between 1 p.m. and 2 p.m., Arizona time, on April 9.


“In the late 50s, the U.S. Army studied the use of the moon as a reflective surface for proving over-the-horizon communication to support their needs for reliable battlefield communications,” he said, noting that the idea was ultimately dropped by the military but picked up by “ambitious radio amateurs.”


These amateurs “managed to conduct successful communications via the Earth-Moon-Earth (EME) path using power levels at the limit of those available to amateur radio operators (1,000 watts),” said Stearns, who became a radio amateur at the age of 12. Since then, he has contacted more than 1,000 other radio amateurs around the world using EME.


“The basic approach to moonbounce is simple. A transmitting site will point a high gain antenna at the moon and launch a signal out toward the moon. A very tiny amount of the radiated energy actually strikes the surface of the moon and the majority of it continues out into the heavens past the moon and on to our friendly alien,” he said.


The contest is an example of community outreach by the ASU Origins Project, said Penelope Moon, coordinator. “Questions about extraterrestrials and about the universe naturally interest kids. Our outreach effort at the ASU Origins Project aim to harness that natural curiosity to get kids thinking critically and comprehensively about who we are as a species and about our relationship to the rest of the cosmos,” Moon said.


“In the end, asking kids what they’d tell an alien is really about getting them to analyze and draw conclusions about what it means to be human and part of life on Earth.”


We come in friendship


Several of the entries sent in by the children were written with a friendship theme, including this one:


“Dear Aliens. Who knows, someday we won’t be aliens but will call each other Friend.”

The Sun Devils next compete in the Pac-10 Championships.

The 15th-ranked Arizona State women's tennis team (14-6) closed out the regular season with a rainy Pac-10 show down with No. 8 UCLA on Saturday at the Whiteman Tennis Center in Tempe, Ariz. Due to inclement weather, the match was postponed until 3 p.m., with UCLA taking the victory 4-2. With the shortened time frame, the doubles matches were not played.

Arizona State was scheduled to compete against rival Arizona, April 16 in Tempe, Ariz., however, the Wildcats will forfeit their remaining two matches because their student-athletes have reached their maximum participation limits for the season. The forfeit will count as a 7-0 victory for the Sun Devils and will give ASU the point for tennis in the Territorial Cup.