Changing climate in your own backyard

When you think of climate, you probably think of it on a large scale. Global climate change may come to mind, or the climate of a large region, like Northern Europe or the desert Southwest.

However, climate occurs at many different scales. Ben Ruddell, an assistant professor of engineering at Arizona State University, looks at climate on a much smaller level. He studies microclimates, which can range in size from a single garden or yard to a park or neighborhood. A microclimate is a small atmospheric zone where the climate differs from the surrounding area. For instance, a park is generally cooler and wetter than surrounding roads or a nearby dirt lot. 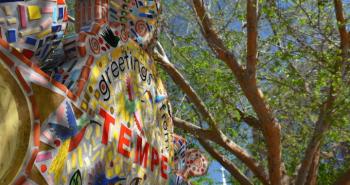 Ruddell is working to develop models for urban microclimates in order to engineer healthier, more comfortable and more efficient cities.

“We can make our cities better places to live,” he says. “In the past, we’ve often made our cities less pleasant than their natural surroundings, but that doesn’t have to be the case. There’s no reason why cities can’t be engineered to be more pleasant and healthy places in terms of climate.”

One way that we have, unintentionally, made our cities less pleasant is by creating urban heat islands. This by-product of urbanization happens when manmade materials such as roads and buildings absorb the sun’s heat and release it slowly at night. As a result, the city is hotter than the surrounding areas, making an “island” of hotter temperatures.

Perhaps not surprisingly, Phoenix has a pronounced heat island effect. But cities all around the world, from New York to Athens, are struggling with the effects of this phenomenon. In addition to feeling unpleasant, excess summertime heat increases both water and energy use. It can also have negative effects on human health.

But urban heat islands aren’t uniform. Microclimates within a city are affected by myriad factors, such as shade, vegetation and moisture. Building materials are also very influential. Impermeable surfaces like concrete or pavement retain more heat than porous material.

A model that can predict the effects of changes made to microenvironments can help us engineer them for human health and comfort. For example, homeowners trying to choose landscaping options can weigh the temperature-reducing effect of lawns and trees against the amount of water they require. In the past, the data needed to create such a model was largely absent.

“There hasn’t been much observation of the microclimate in cities at these very fine scales,” says Ruddell. “The modeling work that has been done has often lacked adequate data – meaning we don’t know whether the models are right or not. Also, what work has been done has mostly been in the Eastern U.S. and Europe – cold, wet climates that have very different rules from hot, dry climates like ours.”

To figure out the rules that apply to arid urban centers, Ruddell’s team is working with scientists on the Central Arizona – Phoenix Long-Term Ecological Research (CAP LTER) project to observe microclimates in neighborhoods throughout Phoenix to build a database. The data is used for modeling.

Another challenge of the project is developing modeling systems that can communicate the complex exchange of heat and moisture between the urban environment and the atmosphere above it, on multiple scales. Models that are currently in use don’t effectively “talk” to one another. One focuses on the land surface and its water movement, the other on the atmosphere above the surface.

Enter Enrique Vivoni and Mohamed Moustaoui, the project’s co-principal investigators, who are adapting models for use in urban areas. Vivoni, an associate professor in the School of Earth and Space Exploration, and graduate student Tom Volo created a system that models watersheds in natural environments. Moustaoui, an associate professor in ASU’s School of Mathematical and Statistical Sciences, and graduate student Stephen Shaffer are modifying an atmospheric model for use in concert with the hydrology model.

“The atmospheric models used to simulate Phoenix generally ignore the fact that we’re taking groundwater and river water and irrigating outdoor plants with it,” says Vivoni. “A large percentage of water use in Phoenix is actually outdoor water use. I thought that was a fundamental problem to look at first. Before doing all this complicated hydrology and atmospheric modeling, let’s focus in on the role of outdoor water use and plants.”

Vivoni took a step back to focus on urban water and irrigation in a project headed by Volo. Volo’s research paper details a hydrological model he adapted to determine the optimal irrigation for different types of landscaping in desert cities like Phoenix.

“Now we have a better handle on ways to apply irrigation water under this climate for different types of landscape designs,” says Vivoni.

With a more complete picture of best irrigation strategies, Vivoni now wants to figure out how the water used in a city moves throughout it. Understanding how water moves both vertically and laterally in an engineered environment requires knowledge of Phoenix’s many detention basins and gutters, and the vast network of storm drains.

“It’s a fairly large task to take models meant for the natural environment and apply them to a place where we do so much engineering of the water system,” says Vivoni.

But in tackling this enormous task, the team hopes to create a system that allows for better decision-making, on both the individual and municipal scales.

“In a sense, desert cities like Phoenix are both creating an urban heat island and reducing it through vegetative cover,” says Vivoni. “If we were able to capture that dynamic in a coupled model of the land surface and atmosphere, we’d be able to design scenarios that tell us how we can reduce the urban heat island while implementing water conservation measures.”

Take highways, for example – expansive corridors of impermeable materials that soak up the sun’s heat and release it well into the night, creating an uncomfortable level of sustained heat. Vivoni imagines freeways lined with palms or mesquite trees, reducing that heat and making the surrounding areas more amenable. These bands of dense vegetation would affect the microclimates they border, potentially making them better places to live.

The information provided by an accurate model will empower individuals and small groups, such as neighborhood associations and city governments, to directly affect local sustainability and quality of life.

“We have the ability to control urban climate and engineer its outcomes,” says Ruddell. “What our work has demonstrated is that we can improve health, comfort, energy use and water use by engineering the urban climate. In your own backyard and neighborhood, the things an individual citizen or community can control, like shade and landscaping, have a greater impact than global climate change."

Peter Bhatia, the award-winning editor of The Oregonian in Portland, is joining the Walter Cronkite School of Journalism and Mass Communication as the Edith Kinney Gaylord Visiting Professor in Journalism Ethics at ASU.

Peter Bhatia, the award-winning editor of The Oregonian in Portland, is joining the Walter Cronkite School of Journalism and Mass Communication as the Edith Kinney Gaylord Visiting Professor in Journalism Ethics at Arizona State University.

Bhatia will start the yearlong appointment this summer, working with more than two dozen students from across the country in the Carnegie-Knight News21 initiative, an in-depth multimedia journalism experience based at Cronkite. In the fall semester, he will teach Journalism Ethics and Diversity. 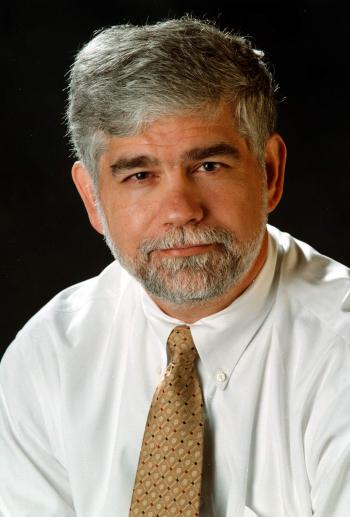 “Peter Bhatia has been one of our era’s great editors. His extraordinary skills, values and experiences will be an enormous benefit to a new generation of journalists,” said Christopher Callahan, dean of the Cronkite School. “We’re thrilled Peter will be helping to guide these aspiring young journalists through the complexities of creating strong, ethically sound journalism in the digital age.”

Bhatia has served as the top editor of Oregon’s largest news organization since 2010. Previously, he was the paper’s managing editor and executive editor, teaming with then-editor Sandra Mims Rowe. Rowe and Bhatia were named Editors of the Year by Editor & Publisher magazine in 2008. The Oregonian won five Pulitzer Prizes, journalism’s most coveted prize, during their tenure.

"Peter has done a terrific job of leading our journalists through the difficult transition to a digitally focused news organization," said N. Christian Anderson III, president and publisher of The Oregonian, who came to Portland in 2009 after serving as the Gaylord Professor. "We will miss him. Still, we recognize that this new opportunity means he will be helping develop the newsrooms of the future. I can't think of a better person to lend his experience and values to students who want to be part of this exciting profession."

Rowe, who served as the Gaylord Professor in 2012, said, "Peter Bhatia brings deep talent, decades of excellence in journalism leadership and a love of teaching to ASU's distinguished Cronkite School of Journalism. The school and its students will benefit greatly."

Bhatia has been a Pulitzer Prize juror six times, served as president of the American Society of Newspaper Editors in 2003-04 and is current president of the Accrediting Council on Education in Journalism and Mass Communications.

“It is a great honor to have the opportunity to work with Dean Callahan, the accomplished faculty at the Cronkite School and its outstanding students,” Bhatia said. “The Cronkite School is a place of innovation and creativity that is focused on the future of journalism. After almost 40 years in newsrooms and countless amazing experiences, I’m excited to be part of the conversation there.”

The Edith Kinney Gaylord Visiting Professorship was created in 2006 through a generous gift from the Ethics and Excellence in Journalism Foundation.

Edith Kinney Gaylord started the Oklahoma City-based foundation in 1982 to foster high ethical standards in the industry. Ms. Gaylord, the daughter of Daily Oklahoman Publisher E.K. Gaylord, launched her journalism career at her father’s newspaper in 1937 after graduating from college. In 1942, she joined The Associated Press in New York. The following year, she went to the AP’s Washington bureau, where she covered the Roosevelt administration and First Lady Eleanor Roosevelt during World War II.