Storytellers are a unique breed – everything is interesting to them. They hear, see, smell, touch, maybe even taste the world around them at all times. They turn their thoughts into experiences. The stories of these experiences are what grab an audience.

Peter Byck is a director and editor from Louisville, Ky. His parents instilled a great personal responsibility for the environment, which Byck respects to this day. After graduating with a bachelor of fine arts from the California Institute of the Arts, Byck edited documentaries about Peter Jackson’s films, “Lord of the Rings” and “King Kong.” He’s also worked as an editor and director for some of the biggest names in Hollywood: Universal Pictures, Warner Bros., 20th Century Fox, and Disney. 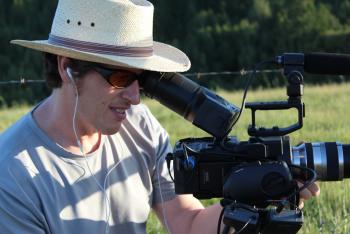 But as a documentarist, Byck is a storyteller.

Byck’s critically acclaimed documentary, “Carbon Nation,” tells the stories of everyday people searching for climate change solutions – when some people don’t even believe in climate change. Byck and his team framed the film around relatable necessities like clean air and water, instead of climate change “doom and gloom,” so that all viewers – from conservatives to liberals and environmentalists to industrialists – can learn about climate change.

“The U.S. President thinks there’s something called ‘clean coal,’” Byck says. “Clean coal is like dry water – it doesn’t exist. Yet they’re still campaigning on clean coal. The folks who want to continue the high carbon economy are the best storytellers since Shakespeare.”

“Carbon Nation” led to Byck’s new position at Arizona State University as a professor of practice jointly shared between ASU’s School of Sustainability and ASU’s Walter Cronkite School of Journalism and Mass Communication. His first course, Sustainability Storytelling (co-listed as JMC 494, SOS 498/594, and MCO 598), begins in the fall. Through his partnership with ASU, Byck will produce a co-branded “Carbon Nation 2.0” film series that could also include the strongest five-minute films created by his students.

“Working with a large university like ASU will allow us to amplify stories out into the world because we need to educate the American people on clean energy,” says Byck. “It’s not like we’re going to tell people to change their minds; it’s just, ‘Hey, did you know this?’ That kind of instant realization is what’s so powerful about films.”

Byck’s current plan for the course’s first semester is to have students pair up and explore solar energy solutions in Gila Bend. They will learn the process of making a documentary; from hunting down characters, to screening the film to a live audience.

“I am going to teach the students everything I’ve learned,” Byck says. “It’s not more complicated than that. They’ll learn it in the trenches. And I am sure I will learn from them.”

At the end of the semester, the best student films could be posted on the Carbon Nation 2.0 channel for national distribution. Byck says this will help spread awareness through the voices of people finding solutions to climate change.

“When American people learn more about the true cost of fossil fuels, they get it,” Byck says. “We just haven’t had a critical mass of people who know about the underlying issues of fossil fuels. The people we’ve found in our films are our heroes. The more we can get their message and hard work seen and heard, the better.”

And it’s the storytelling behind the camera that will teach the students real-life lessons.

“If you don’t talk a lot, yet you say a lot, people will want you around.”

American Indian Studies faculty and master’s cohort students presented their research at the 55th annual meeting of the Western Social Sciences Association Conference that was recently held in Denver.

“I encouraged graduate students enrolled in my Research Methods course at ASU to submit and present research papers at this meeting. The conference is an opportunity for future American Indian Studies scholars to share their research, network with experts in the field and promote the discipline, especially graduate degrees in American Indian Studies,” Killsback said.

“I conducted an oral history project when I was an undergrad and it is something I continue to work on,” Tom said. “The conference broadened my understanding of the way people talk, write and research American Indian Issues. I left the conference feeling inspired to do more and now I can’t wait to put together a proposal for next year’s conference.”

Presenting at the conference reinforced Medina’s confidence in the cohort’s research work and provided her with an opportunity to network with peers.

“The conference was an awesome opportunity to build a better relationship with my cohort and to see what other American Indian Studies majors are doing. It also made me proud of the AIS program at ASU because it gave me the confidence of knowing we are doing important research,” she said.

Topics that were discussed at the conference included promoting the development of the discipline and scholarship of American Indian Studies. Killsback participated in “Rules for ‘Civilizing’ American Indians and their Reverberations into the Modern Era,” which addressed the assimilation-based policies of the U.S. Bennett presented a chapter of her dissertation titled “Responding to Hate Crimes and Racism in Farmington, New Mexico.”

“The conference was a success and our ASU AIS graduate students fully embraced the opportunity to present their research to a national audience and, more importantly, engage in networking and develop as professionals of the academy,” Killsback said.