ASU film professor Adam Collis has built a pipeline into Hollywood and is hoping his new movie, “Car Dogs,” will strike oil for the university and benefit a feature film internship program for years to come.

Starring Patrick J. Adams (“Suits”), comedian superstar George Lopez (“Lopez Tonight”), Oscar nominee Nia Vardalos (“My Big Fat Greek Wedding”) and a special appearance by Oscar-winning actress Octavia Spencer (“The Help”), the 105-minute feature will make its Arizona debut at the 15th annual Phoenix Film Festival on March 31. But the story of how “Car Dogs” got made is as intriguing as the plot itself.

Scottsdale native Mark King’s movie script bounced around big Hollywood studios with marquee names attached for years – but like many screenplays, it never got to the silver screen. It sat on King’s shelf until his former film teacher, Collis, saw a perfect opportunity: ditch the big studios, go independent and, with a shoestring budget, make a great film while giving student interns and recent alums the chance the learn filmmaking on an actual motion picture set.

“Car Dogs” tells the story of a dealership sales manager, Mark Chamberlain, who needs to sell 35 cars to earn his own dealership and to finally get out from underneath the thumb of his sadistic father. The question is if Mark is willing to cheat his customers, betray his sales team and neglect his family all for the blind pursuit of profits. It’s a tough as nails film about the challenges of a dog-eat-dog world – but also a fun look behind the scenes at the true world of car salesmen and their shady tricks.

“The ASU School of Film, Dance and Theatre has accomplished something no other film school has ever done and that is to collaborate in the production of a feature film with an Oscar-winning cast and crew while training the next generation of filmmakers,” said Collis, who is the creator of the Film Spark Feature Film Internship Program, which is housed in ASU’s Herberger Institute for Design and the Arts. “What we’ve done in such a short amount of time is unprecedented. We made a great film and the learning experience for students was off the charts.”

Collis worked with Jake Pinholster, director of the School of Film, Dance and Theatre, to create the academic program in early 2012. Work on the production commenced in the summer of 2012 when Collis and former ASU film professor F. Miguel Valenti, the founding director of the Herberger Institute Film and Media programs and a producer on the film, introduced students to the “Car Dogs” script, breaking it down to its budgeting and production elements. Collis worked for a year to secure independent funding, and the film was “greenlit” in November 2013. Some 271 students applied for jobs on the crew, of which 85 were given internship opportunities, which was a ten-week, one- to six-credit class.

“It had always been a dream of mine to work on a feature film,” said Amy Harmon, a student who worked on the production side on “Car Dogs.” “To see this movie go from ground zero to the first day of filming was the coolest thing to watch.”

The Feature Film Internship Program, which will produce its third feature this summer, is one component of the larger Film Spark program, which also includes industry seminars, guest speakers and other programs designed to connect students to the film professions. Since the program’s start, Collis has connected School of Film, Dance and Theatre students with:

• four Oscar winners
• five Oscar nominees
• three major studio chiefs
• the President of the Academy of Motion Picture Arts & Sciences
• the President of the Director’s Guild of America
• the producers of “Batman Begins,” “The Help,” “Star Trek,” “Requiem for a Dream,” “Foxcatcher,” “Moneyball,” “Boyhood” and “Dazed and Confused”
• many other active film industry professionals

With a robust Film Spark program and the Legislature’s contemplation of two current film-related tax incentive bills, Collis believes more motion pictures could come to Arizona in the near future.

“It’s Arizona’s business to capture if we want it. From Hollywood’s perspective, Arizona is a highly attractive place to shoot film and television,” Collis said. “The state has a strong crew base and very attractive locations from the great urban environments of Phoenix to the magnificence of the Grand Canyon and everything in between. Add to the fact that Arizona is a quick hour flight from Los Angeles, and you can see why Hollywood would love to be shooting in Arizona.”

A cheaper and easy-to-use medical device that aims to prevent neonatal jaundice and save infants’ lives.

A student-led initiative that is working to combat human trafficking in the Phoenix metro area. 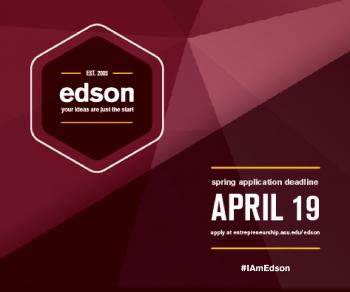 These are just some of the approximately 260 ideas from student ventures that have received nearly $2.5 million in seed funding from Arizona State University’s Edson Student Entrepreneur Initiative thus far. The program, currently in its tenth year, is now accepting applications for its 2015-2016 cohort.

“Over the last 10 years, Edson has proved that ASU students are already at the cutting-edge of education and entrepreneurial thinking, creating opportunities for themselves – a critical skill that will define a new generation of college graduates,” said Mitzi Montoya, vice president and university dean of entrepreneurship and innovation at ASU. “It continues to draw the most entrepreneurial students from across ASU who are driven to advance big ideas that can have major economic, social and educational impact.”

In the past three years, Edson teams have raised more than $2 million in external funding, filed over 30 patents, and hired more than 150 employees.

Student ventures selected as part of the Edson program receive up to $20,000 in seed funding, office space, mentoring, and up to 12 months of acceleration and support services – a highly responsive, individualized and student-centered environment that makes the program one of the most competitive and rewarding student entrepreneurship programs in the country.

The applications are evaluated for viability, scalability, and compliance with university standards. All ASU students, including undergraduate, graduate, doctoral and part-time students, are eligible to apply as long as a startup team counts at least one current ASU student as a key founder.

Garret Westlake, associate dean of student entrepreneurship at ASU, said, “We encourage students from all majors and backgrounds, who have a big idea for a for-profit or non-profit organization, to apply to the Edson program. The key is to just start.”