Canon launches its online store this month that gives ASU students, faculty and staff the opportunity to buy Canon products at reduced prices. ASU currently is the first and only university to access Canon’s purchase program. Discounted rates on Canon products such as cameras, lenses, camcorders, bags and more now are available to the ASU community at no cost to the university.

“Our strategic-alliance partnership with Canon now extends incentives to the ASU community,” said Sam Wheeler, executive director of Auxiliary Business Services at ASU. “Individuals on campus now have the chance to take advantage of this special cost-savings opportunity.” The Canon Online Store offers great deals throughout the year. ASU students, faculty and staff can visit the Exclusive ASU Purchase Program web page, enter a valid ASUrite ID, be linked to the Canon Online Store, set up an account and begin shopping. Shoppers also can receive $5 flat rate ground shipping & handling on all purchases of $150 or more when a special promotional code is entered during checkout.

Broader access to the Canon Online Store for the ASU community is just the next natural step for the ASU-Canon Strategic Alliance Partnership. ASU and Canon have been working together since 2006. The goal of the partnership is to provide premium service to departments with the best possible equipment at an economic price.

Part of Canon’s commitment to ASU is Canon’s Sustainable Digital University, which capitalizes on technology to enhance effectiveness. A recent print assessment by Canon on ASU equipment that found by switching to duplex printing during fiscal year 2011, 725 trees and 2.34 million liters of water were saved.

Canon print services also are conveniently available to the ASU community on the Tempe campus Memorial Union at the Print U center.

“Over the years, we’ve implemented many cost-savings and sustainability-minded initiatives with ASU,” said Robert Lane, director of digital document services. “Launching Canon Online Store access to students, faculty and staff is an exciting step for us as it underpins our commitment to the ASU strategic alliance.”

Karen Brenneman and her colleagues at ASU's Biodesign Institute have been examining ways to detect the presence of Salmonella Typhi in stool following inoculation with various vaccine strains.

Salmonella Typhi (S. Typhi) is the causative agent of typhoid fever, a serious health threat resulting in some 22 million new cases yearly and approximately 217,000 fatalities. A number of novel vaccine candidates using live attenuated strains of Salmonella are being developed, but care must be taken to ensure the bacteria are not excreted into the environment following vaccination.

Karen Brenneman and her colleagues at Arizona State University’s Biodesign Institute have been examining ways to detect the presence of S. Typhi in stool following inoculation with various vaccine strains. Their results recently appeared in the Journal of Microbiological Methods. 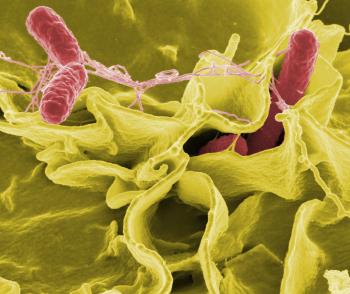 The group, overseen by Roy Curtiss III, who directs Biodesign’s Center for Infectious Diseases and Vaccinology, applied a test known as RapidChek SELECTTM Salmonella to detect the shedding of S. Typhi in stool, demonstrating a 10-fold to 1000-fold improvement in detection of attenuated strains compared with conventional methods.

“This technology is of critical value to help us assess the degree and duration of shedding that occurs after immunization with any live vaccine. We have an ethical responsibility to make sure we understand the effects of vaccination not only on the individual that receives the vaccine, but also on those around him/her in the community,” Brenneman says.

Shedding of Salmonella species in stool following infection typically lasts 3-5 weeks, although typhoid fever infection often results in shedding of bacteria for up to 3 months and typhoid carriers can shed the pathogen indefinitely.

New vaccines using attenuated versions of S. Typhi are able to confer protection against typhoid fever, triggering a robust, system-wide immune response. Further, the current research (combined with data from clinical trials) demonstrates that attenuated forms of the bacteria are shed for a much shorter time period than wild-type S. Typhi. A number of vaccine strains show early shedding for 1-3 days following vaccination. With some vaccine strains however, shedding persists for 7-11 days, potentially leading to vaccination of those not electing to be vaccinated or who, because of age or other conditions should not be vaccinated.

The fact that attenuated strains are significantly less capable of surviving outside their host is encouraging, though it presents a problem. Detection of attenuated strains in stool is difficult using conventional tests. While the attenuated strains of S. Typhi used in vaccines are considered safe for healthy adults, shedding of bacteria poses some risk for infants, elderly individuals or those with weakened immune systems. For this reason, patients involved in clinical vaccine trials must be carefully monitored to ensure shedding has completely abated.  Conventional detection tests for S. Typhi rely on culturing the bacteria in conjunction with additives designed to selectively inhibit the growth of competing flora. To do this, bile, heavy metals or dyes are added to the growth medium during the enrichment of S. Typhi. While the process works well for enriching and detecting wild-type S. Typhi, these additives have a negative effect on attenuated forms of the bacteria, often rendering them undetectable.

In the current study, the group used an alternate method – the RapidChek SELECTTM Salmonella detection system, which has been applied successfully to detect the presence of Salmonella on poultry carcasses, eggs and other food products. The method enriches the bacterium in the presence of a bacteriophage cocktail, which reduces competitor microbes. This new, highly sensitive technique can be applied to subjects engaged in vaccine clinical trials, to ensure they are not excreting live vaccine microbes, which could then be passed between humans via the fecal-to-oral route.

Another advantage of RapidChek SELECTTM Salmonella is that it permits a rapid test for the presence of Salmonella just 6 hours after vaccine inoculation, using a Salmonella-specific antibody strip, sensitive to the bacterium’s lipopolysaccharide. RapidChek SELECTTM Salmonella is capable of detecting many different types of Salmonella. Here, the technique was used to assess its ability to detect a number of attenuated strains previously or currently being evaluated in phase I clinical trials with healthy young adults 18 to 40 years of age.

Results showed that RapidChek SELECTTM Salmonella is highly sensitive to the presence S. Typhi vaccine in stool for the majority of clinically relevant attenuated vaccine strains. In every example, the technique yielded at least a 10-fold improvement in detection over traditional methods and in some cases yielded increases in sensitivity over 1000-fold.

All vaccine strains examined showed some potential for shedding. Each strain exhibited a characteristic shedding profile, generally much shorter than for wild-type S. Typhi, though all those examined persisted for at least 4 days. Some experimental strains, like χ8444 on the other hand, resembled wild-type S. Typhi in their shedding behavior, in some cases persisting in stools for up to 2 weeks post-immunization.

A suite of three new vaccine candidates belonging to a group known as regulated delayed attenuation vaccine strains, developed by the Curtiss lab, were among those tested. Their persistence resembled wild-type S. Typhi for the first 48 hours before rapidly declining to undetectable levels by day 5. These strains could not be cultured and enriched with conventional methods however, due to slower than normal growth rates and increased susceptibility to stress.

To get an approximation of shedding potential, the regulated delayed attenuation vaccine strains were exposed to fecal flora common in the large intestine. These strains showed less ability to survive stress and lower competitive fitness, compared with other S. Typhi strains. The authors suggest that these survival rates in vitro provide a reasonable baseline to approximate actual shedding potential in stool – currently being evaluated in clinical trials.

While conventional methods of detection still have an edge over RapidChek SELECTTM Salmonella for detecting wild-type S. Typhi, the method showed a 10-fold to 100-fold improvement in detecting attenuated strains, (with the exception of a single strain – Ty21a) and 1000-fold improvement in the case of the 3 regulated delayed attenuation vaccine strains tested in the study.

The research further solidified evidence that attenuation of vaccine strains exerts a profound negative impact on bacterial fitness, thereby improving their safety for vaccine use. Future work is aimed at further reducing the potential for person-to-person transmission of a live attenuated vaccine strain, following immunization.