Senior Jacqueline Cako earned another win in the 2013 NCAA DI Women's Tennis Singles Championship on Thursday morning, clinching herself a spot in the third round of play and securing her third consecutive All-American honor. Cako defeated Kata Szekely of Tennessee in three sets, 6-0, 4-6, 6-1 and will play against Breaunna Addison of the University of Texas on Friday at a time yet to be determined.

"I feel great and I'm hitting the ball well so that's all I can really ask for," Jacqueline Cako said. "Now I'm just excited for doubles later today." 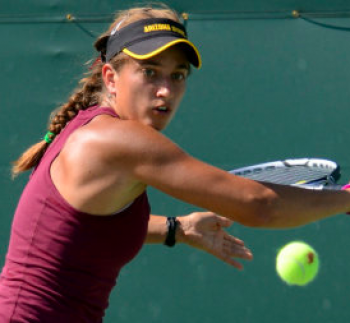 The doubles pairing of Nicole Smith and Jacqueline Cako will kick off the first round of doubles play this afternoon, at 4:00 p.m. CDT against Breaunna Addison and Noel Scott of the University of Texas.

Live video and statistics are available at the 2013 NCAA DI Women's Tennis Championship Tournament Central. Stick with thesundevils.com and Like Arizona State Women's Tennis on Facebook for all of the latest information.

This is the second Academic All-America honor for Wigness, first for Parlich.

The 11 members of the 2013 Capital One Academic All-America Division I Softball First Team have an average GPA of 3.76. Two first-teamers have a 4.0 GPA including ASU's Bailey Wigness and UIC's Coryn Schmit. 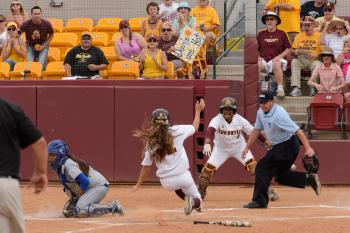 Both First Team honorees this season are natives of Arizona. Senior infielder Sam Parlich hails from Chandler and junior outfielder Bailey Wigness is from Casa Grande.

To be eligible for Academic All-America® consideration, a student-athlete must be a varsity starter or key reserve, maintain a cumulative G.P.A. of 3.30 on a scale of 4.00, have reached sophomore athletic and academic standings at his/her current institution and be nominated by his/her sports information director. Since the program's inception in 1952, CoSIDA has bestowed Academic All-America honors on more than 14,000 student-athletes in Divisions I, II, III and NAIA, covering all NCAA championship sports.

Named Pac-12 Player of the Week on March 19 for the final weekend of play prior to the start of the Pac-12 schedule. Had a single-game career high four hits against No. 15 Michigan on March 15. Had two home runs and four RBI against UC Davis on March 10; also had a pair of home runs against Portland state on Feb. 24, giving her four games of multiple homers in her career. Hit well in Pac-12, including two-hit games on the road at Stanford and Arizona and a four-RBI showing against California on April 26. Hit a grand slam against No. 10 California on April 26 to give ASU five on the year. At the end of the regular season, ranks in career ASU records in the Top 20 for home runs (t12th), RBI (10th), hits (16th) and doubles (21st). Named Pac-12 All Conference Honorable Mention onMay 15. Off the field, was honored for her work in the classroom with First Team CoSIDA Academic All-District honors on May 2, which put her on the ballot for Academic All-America. Had two hits in the NCAA Regional and one run scored.

Tied career bests in three categories in 2013. Has recorded three hits in three games, including going 3-for-3 against Boise State, Feb. 10, against No. 15 Michigan, March 15, and 3-for-4 with two runs scored against Virginia Tech, March 15. Did damage on the bases on March 24 against No. 12 UCLA, walking twice and stealing two bases to go 2-for-2 with one run scored on the day. Scored three runs at Stanford on April 6. At the end of the regular season she had 37 runs, 46 hits and a .365 batting average which ranked 13th in the Pac-12. Ranks 15th in career stolen bases at ASU with 26 total, 13 of those coming this season. Named Pac-12 All Conference Honorable Mention on May 15 and NFCA All-Region Second Team on May 16. Earned First Team CoSIDA Academic All-District on May 2, putting her on the ballot for Academic All-America. Led the team in the NCAA Regional with a .667 batting average after tallying four hits, two runs and her first career triple.