U.S. News & World Report released its prestigious annual list of the “Best Graduate Schools” in the country this week. For the eighth year in a row, the W. P. Carey School of Business at Arizona State University ranks among the nation’s top 30 full-time MBA programs.

“We strive for consistent excellence at the W. P. Carey School of Business, and we’re happy that U.S. News & World Report repeatedly recognizes us for high quality,” said the school’s dean, Amy Hillman. “We appreciate all of the hard work from our faculty, staff and students.” 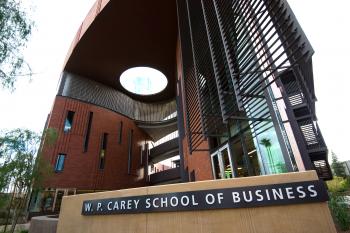 On the new rankings lists, the W. P. Carey School ranks No. 30 for full-time MBA programs, the best ranking for any Arizona school. The program is among the three smallest in the entire top 30, offering a more personal feel. The out-of-state tuition rate is among the three least expensive in the top 30.

The new rankings are largely based on the positive reputation of schools among corporate recruiters – who offer students jobs – and among top administrators from peer business schools in-the-know. The publication also considers statistics that measure the quality of a school’s students and employment outcomes.

Earlier this year, U.S. News & World Report ranked the school’s online graduate business programs No. 3 in the country, and its online MBA program No. 4 nationwide.

Other recent high rankings for the W. P. Carey School of Business:

• U.S. News & World Report ranks the school’s undergraduate business program No. 29 in the nation, and the doctoral program in economics No. 36 in its category.

• The University of Texas at Dallas ranks the W. P. Carey School top 25 in the world for business-school research productivity.

• The Center for World-Class Universities at Shanghai Jiao Tong University ranks the W. P. Carey School No. 22 globally for economics/business.

For more information about the W. P. Carey School of Business, visit wpcarey.asu.edu.

Professor Emeritus Leonard (Len) Gordon, a founding member and former dean of the Emeritus College at ASU, passed away on March 4.

ASU professor emeritus Leonard (Len) Gordon, a founding member and former dean of the Emeritus College at Arizona State University, passed away March 4. He was 79.

A vital member of the emeritus community, elected senator to the University Academic Senate Executive Committee and chair of the student faculty policy committee for 2014-2015, Gordon first joined the university in 1967. He taught and did research with ASU’s Department of Sociology, now part of the T. Denny Sanford School of Social and Family Dynamics, and received grants from the National Science Foundation, the Rockefeller Foundation and other funding sources. 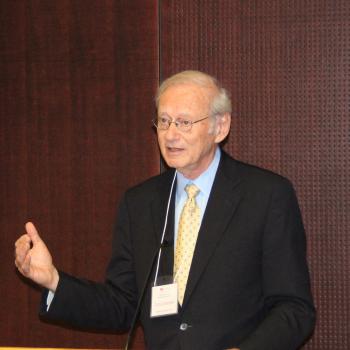 Gordon published articles and books primarily in the area of collective behavior and social movements. He penned two books, "Sociology and American Social Issues" and "A City in Racial Crisis: Detroit Pre and Post the 1967 Riot," in addition to published articles in professional journals and the Encyclopedia of Sociology.

Following his nine years as chair of sociology, Gordon then served as the associate dean for the College of Liberal Arts and Sciences for 11 years, followed by six years as the dean of the Emeritus College, where he worked to advance the college’s programs “as a benefit to the many talents of our emeritus faculty and to the university community.”

An avid educator and as dean of the Emeritus College, Gordon continued to teach courses, ranging from an examination of collective behavior and mass media and keys to healthy aging and the changing dynamics of our growing older population, to national and international perspectives through the lens of sport and politics. He contributed to the 2013 Project Humanities “Humor…Seriously” series, exploring human humor and the link between witty silliness and sociology.

Most recently, Gordon took his interest in social behavior, sports and politics to the community through the Osher Lifelong Learning Institute, where he taught a continuing education course that examined sports as a vehicle for social cohesion.

Gordon earned history degrees at University of Michigan and Wayne State University, where he also completed his doctorate in sociology.

“Len was a wonderful colleague and friend and will be deeply missed," said Elmer Gooding, dean of the Emeritus College. "He was unselfishly willing to help others and to serve in whatever capacity he was needed. His positive impact on ASU was felt wherever he served – whether it was in the former Sociology Department, the College of Liberal Arts and Sciences, the University Senate or the Emeritus College. ASU is clearly a better place because Len spent over four decades of his career here."

Outside of university and community work, Gordon was a sports enthusiast. He played competitive softball and was a fan of the Detroit Tigers and the University of Michigan Wolverines. He also wrote a memoir of his life with his wife, Rena, upon her passing, as part of the Virginia G. Piper creative writing program. He also established the Len and Rena Gordon “Spunky” Award, which is presented each academic school year to a student who has shown “spunk” in overcoming obstacles to succeed as an undergraduate. He is survived by his wife, Dorthy.

A colleague once wrote that the Emeritus College owes its inception and follow-through to a number of people, “but certainly at the top of that list is Len Gordon. He is public image, negotiator, wise old professor, and he never asks something he is not willing to do.”

A memorial service for Gordon took place March 8, and a special issue of the Emeritus College Newsletter will be devoted to Gordon later this year. Memorial donations are being given to the Len and Rena Gordon "Spunky" Award fund: http://asufoundation.org/spunkyaward.